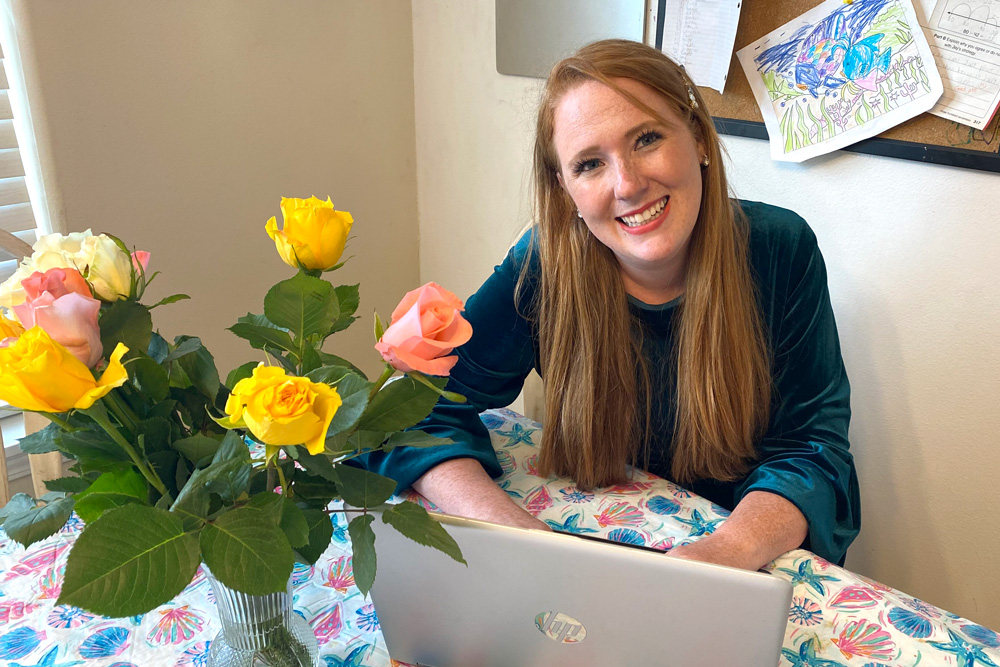 As a kid, I devoured books. Things like Ender’s Game, A Wrinkle in Time, the Narnia series, and Harry Potter. They were magic. I wanted to make magic too. From elementary to high school, I’d stay up late writing stories and terrible poetry. I dreamed of writing novels, being published…

I went to college. Became a registered nurse. Got married. Had kids. Time was always short and I never pursued those dreams. But every once in a while, the aspirations of my ten-year-old self bubbled up. I still wanted to be a writer. About five and a half years ago I took the plunge.

I joined Facebook critique groups—thank you Cleverly and InkStains. I learned to write, exchanged stories, and took a few classes about where to submit work. Then I discovered the Writers of the Future Contest. It was unlike most markets I had considered. The contest was created in 1983 by L. Ron Hubbard for aspiring writers to have their efforts seen and acknowledged. It pays professional rates, offers substantial prize money, and extends an invitation to a week-long writing workshop in Hollywood for the winners. As I studied, I realized many icons in the industry had their roots in this contest; David Farland, Dean Wesley Smith, Nnedi Okorafor, Ken Liu, among many others. No contest has had the same longevity or worldwide reach as this one. It has launched the writing careers of hundreds.

I wanted to win it.

Four years ago, with bright eyes and all the hope in the world, I wrote my first short story. I took aim at the Writers of the Future target and … missed. Rejected.

I notched my arrow and tried again.

Some got closer. Nothing stuck.

One thing I love about this contest is the community around it, which I discovered when I joined the Writers of the Future Forum. One of the forumites, Dustin Adams, challenged us to not miss a quarter. I was committed, but then I got pregnant. That was hard. During my last trimester (which lined up with the last quarter of that year) I ended up writing much of my entry in the hospital after giving birth. A few months later—and to my utter shock—the contest director, Joni, called me and said that story had made finalist! I thought it must be a fluke. A week or so later, she called again to say I hadn’t won. But you know what? I felt exhilarated.

I wrote another story and made finalist the very next quarter!

But it felt a little less like a fluke.

Wulf Moon reached out to me, invited me and the rest of the forumites to be a part of his workshop called “Super Secrets.” I had had a bit of an inside scoop before they became public, because Wulf had given me some assignments the previous quarter. I know his secrets helped me make my second finalist (and continue to help me now). He also told me to write “belief becomes reality” on a sticky note and put it by my computer.

I wrote my note and joined the workshop.

I kept taking aim at the Writers of the Future target. I wasn’t getting flat rejections anymore, but the arrows weren’t sticking either. The next year Wulf encouraged us to submit work to other markets in addition to Writers of the Future. I started strong, but then a health scare blew me out of the water. For about a month it felt like I was walking through water. For months more, I couldn’t focus. I couldn’t sleep. I couldn’t write much. But by the end of each quarter, I stubbornly scribbled out something new, subbing even if I barely made it in. That belief note wandered off at some point—I share a writing space with four little kids—but I made a new note each time it went missing. I tried to believe. After a few procedures, (and a few bumps), things turned around and I started to feel myself again. I recommitted myself and started writing hard…

…Just in time for Covid-19 to hit. Like everyone else with small children, I suddenly became a homeschool teacher (mad respect for those in education. You rock!). I struggled to write, but every quarter I still submitted something to the contest, even if I had to revise and resub something old.

I kept missing the mark.

It started to get to me.

But then friends began reaching out. “Do you have a story ready this quarter?” “Are you working on something? I’ll crit for you.” That’s a wonderful thing about the Writers of the Future Forum. The networking helps writers reach out, and the forumites I’d stepped away from during the health scare became even more invaluable (and remain so now). They breathed hope and life back into me. What a difference that made!

In-person learning began. I had more time, but I felt rusty. I made semi-finalist during Quarter Three. During Quarter Four, I made finalist again … And I lost by a hair. Fourth place. That was hard because I felt I’d given everything I had to that story. I didn’t know if I could ever top it, and if that didn’t win, I was beginning to doubt I ever could.

But a few weeks later Joni called again—which was odd because the quarter hadn’t even ended yet. Turns out the anthology for Volume 37 was being compiled and even though I’d lost, they still wanted to publish my story. Galaxy Press would fly me out to Hollywood and I would go to the workshop and gala as a Published Finalist! What an honor! I was thrilled.

Revived and determined, I rewrote my belief note and worked on my next entry. It was going to be tight to finish and I had a lot of revising to do from critiques … but I was not going to miss a quarter. I had to enter something.

In one of his essays, Mr. Hubbard says to “write sincerely and you are certain to write better and better.” Wulf Moon taught me to write something with heart. And at Fyrecon, David Farland said to write something that elicited a strong emotion. I stayed up late and tried to write the sincerest thing I could muster. Just before midnight on December 31st, I hit submit and went to bed.

And in the middle of April, I got another phone call. That sincerely thought-out entry had made FINALIST! Wow! This made me a finalist in back-to-back quarters, which is thrilling in and of itself.

I spent the next week in equal parts jitters and gratitude. I am incredibly grateful for friends who lifted me up when I came close to quitting. They didn’t know the impact of their words and support, but I assure you, it changed my direction. They helped me believe again. And you know what? Participating in the contest has helped me believe too. Because the contest seems to exist not just for the writers who win it, but as a means for all aspiring authors to learn to meet deadlines, network, and (most of all) write saleable stories. 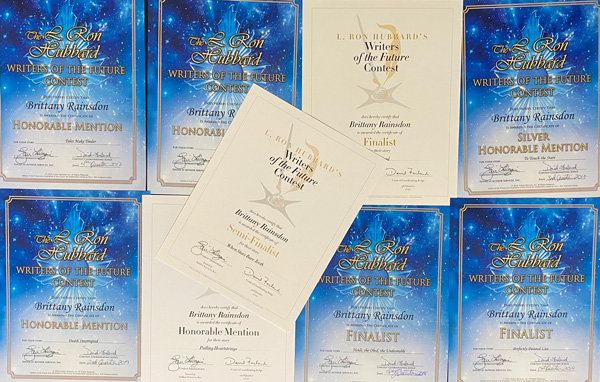 When I got that fourth finalist phone call, I realized I could make it as a writer, even if that story didn’t win. Because I’d learned from my time in the contest that when the rejections come, I just have to get back up and try again.

When the phone call with the judges’ results finally came, I was shaking. As Joni started talking, I was certain this was another miss—but I’d be okay. I was psyching myself up for another rejection. And then Joni screamed YOU WON! YOU WON SECOND PLACE! I was floored.

I placed in the largest international writing contest for aspiring writers in the world. This was real. It came so close to not being.

There were many ups and downs since I started entering the contest—since Wulf first told me to write that sticky note. Sometimes I lost the note and had to dig up that belief again, rewrite it, and work hard. Sometimes my friends helped me pin that belief back up. And sometimes a bit of belief came after tearing open an envelope and opening one of those Writers of the Future certificates the contest mails out.

Writing is a marathon, not a sprint, and I think there are times we all feel like we can’t make it. This is why it’s so important to keep positive influences in our lives.

For me, this contest is one of those influences, where the mantra is “pay it forward.” It’s why Mr. Hubbard created it, why Dave Farland, Tim Powers, Orson Scott Card (and many others) give of their time to judge entries and create the free online workshop. It’s why Wulf Moon (a previous contest winner) wrote his Super Secrets and keeps them accessible on the Writers of the Future Forum for free. It’s why Scot Noel (another contest winner) seeks out and publishes primarily new authors in his very successful and gorgeous magazine, Dream Forge Anvil.

There are many other positive influences I credit to helping steer me on the path toward publication. Some came in the form of thoughtful mentors like Wulf Moon and Becca McCulloch. Others are the kind—but honest—critique groups, and good friends I found online, and on the forum, (like Cleverly, InkStains, and the Wulf Pack). Some came from supportive family and overly-enthusiastic kids.

If I had any advice to give to aspiring writers it is to seek out and be a part of those positive influences. Believe in yourself and spread that belief to others. A rising tide lifts all ships and there is most certainly something all writers—even aspiring writers—can do to lift each other. Kind, encouraging words made a huge difference to me. I’ll bet they would mean the world to someone else too.

I know I’ve much further to go, but I’m very excited to see how far I’ve come. As I type this out, I like to imagine that my ten-year-old self is smiling bright. She dreamed of becoming a writer, making magic, sharing stories. And about twenty-some-odd years later, her dreams finally came true.

Because her grown-up self finally believed they could. 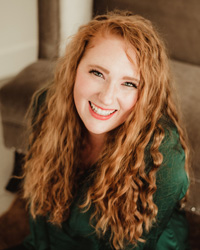 Brittany Rainsdon grew up as the only girl in a family with four brothers. She’s reversing that trend with her own children—three girls and one boy. In 2008, Brittany graduated with her RN from Brigham Young University-Idaho. She received her BSN in 2010. Brittany has worked in both medical/surgical and rehabilitation specialties, but she currently enjoys work as a stay-at-home mom.

Brittany started writing at a young age, penning poems and stories, and filling an overstuffed nightstand with spiral notebooks, pens, and floppy disks (yes, those were still a thing in 2007). On entering college, Brittany lost touch with her writing and didn’t come back to it for several years.

After having her third child in 2015 and needing a creative outlet, her passion for writing reignited. Once she found the Writers of the Future Contest, Brittany has not missed a quarter and has been a Writers of the Future finalist three times. “Half-Breed” is her first published story and she hopes to publish many more.

Brittany lives with her husband and children near the Snake River in Idaho, where she swears it looks like a wintered Narnia for nearly half the year. She has many pairs of fuzzy socks.

Learn more about Brittany at Rainsdonwrites.com

Winners Announced: Writers and Illustrators of the Future Contests

Your Altered World: A “Scientific” Approach to Writing Fantasy
Scroll to top