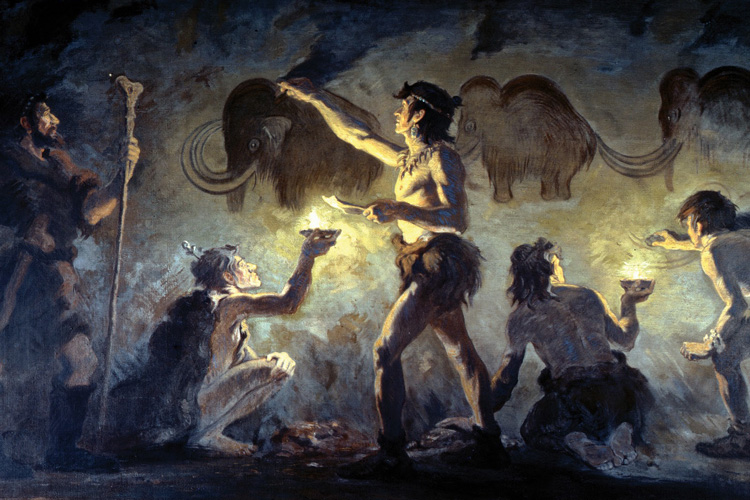 Mankind has used pictures to tell stories from the beginning of time. Recently, ancient cave paintings were discovered in France, and while cave paintings aren’t new discoveries, these are unlike anything seen before. The artist of this series of pictures has shown predators that have never before been depicted. He also used rock textures and protrusions to indicate muscle and structure on his animals. In fact, I felt a special kinship with this artist when one of the press corps referred to him as an “illustrator.” Even 20,000 years ago when these pictures were made, someone was deft enough, observant enough, to depict what he saw in his world so well that we can also see and possibly even think and feel as he did. This is truly ageless realism.

I was inspired to become an illustrator largely by the drawings of later artists—people such as Frank Frazetta, Vincent Di Fate, Rick Sternbach, H.R. Van Dongen and various other artists in SF and comic books—artists too numerous to mention. But these were artists who, like the cave painter, also shared with us their own visions, along with the visions of the Golden Age of SF writers, such as Isaac Asimov, L. Ron Hubbard, and H.P. Lovecraft.

And so, like many artists, I began creating my own work. By age three I had a jump on things, and in 1979 I went to art school and began psyching myself up to study realistic art. But I found to my dismay that “Realism” is now looked down upon. I showed my professors my books with illustrations by artists whose visions I admired, and often heard the response, “So why do you want to waste your time doing that ‘stuff?’” My teachers showed me lots of “Untitled 2s” and trendy stuff with “blue periods” and “anachronisms,” and I met a lot of students who bought into the idea of smashing glass into papier-mâché, people who believed that if they did it long enough, they’d get rich.

But I didn’t subscribe. So, I went back to my magazines and art books and science fiction conventions. It soon became apparent to me after studying paintings by Freas, Whelan, Gaughan and Di Fate that I had to study in my own class, a class of ageless realism.

Art Is a Journey

It takes more than talent or skill to break into the field of illustration—it takes drive and passion, a drive that keeps you at it all the time (even in your sleep). It takes commitment to yourself to be the best you can be. You never reach the “top” and relax. It’s like climbing a mountain, with only an illusion that there is any top where you can rest at the high lakes. You never reach the top.

Last year, I won the Hugo award for the “Best Professional Artist” in the SF field. I could be on a high horse about it, but I’m not. No matter how long you work at it, and no matter how successful you become in your art, you will always have people who dismiss what you do as “that hobby of yours.”

Remember, when marketing your work, be professional. Put the artsy attitudes aside and approach the clients with the idea that you have something to offer them, not the other way around. No matter how crowded a field is, people are always looking for good work.

In your presentation, be brief but informative. Do not inundate your client with too much of the same material. At that same time, try to stick to one artistic medium. And above all, research your client’s product. That is, if you want to paint book covers, go to bookstores and look at the covers. Analyze why you like the ones you do, decide what makes them successful. Then, armed with such knowledge, you can show your work to art directors with the added bonus of knowing something about the product.

Be prepared to drop off work with art directors—but you need not send or leave original art. Instead, give them slides (good 35mm ones work best). Slides are easy to send, won’t cost you much, don’t risk your work, and are convenient for the art director to handle. He or she can keep them or send them back easily.

And when you do show your work to an art director, make sure that you let them know how and where to get back in touch with you. Art directors hate people who drop off a bunch of huge, heavy paintings, leaving not even a clue as to how to get back to them.

In my experience, the best way to break into illustration is by doing magazine covers. Since magazines usually pay lower, they are always looking for new talent. Semi-pro magazines are always good places to break in. The editing and fiction inside the magazines are almost always professional, but since the magazines run under 10,000 copies, they often can’t pay as well. But what you do get by doing these covers is exposure, which will lead you to the higher-paying jobs in the long run.

On illustrating covers, I have a few words to the wise: Remember that the purpose of your illustration is to help sell the book or magazine you’re illustrating. The idea of actually illustrating scenes from the book comes in only as a close second.

And never plagiarize the work of another artist in the hopes that it won’t be recognized. It will.

On Selling Work to the Comics

Should you desire to enter this arena, beware that it is an entirely different field from traditional SF. Despite the similar subject matter, comic and SF illustrators rarely cross lines.

Comic book art is far more strenuous. Breaking into it can be like trying to open a safe without knowing the combination—you just have to keep trying until something clicks.
The criticism that you receive for comics-related work will be far more severe than what you will receive in the SF field. Comics are also, and I use this word cautiously, quite “political.”

Usually, comics artists work under a contract that has terse, legal wording, for a small advance (depending on the company you’re working for), under some killer deadlines. It’s not uncommon for an inker to be required to do three pages a day (I got bleary-eyed after doing one page) for seven days a week. However, unlike SF work, comic books often pay you royalties based on sales—which is where you can make some good money.

The pressure never lets up once you get off and running. Trust me, I know. The mountains get steeper and steeper. But you climb them because your vision and ambition tell you to do it. When you become that dedicated to your work, the moral support of your spouse or significant other is essential. To them, your work will always seem like that “other” man or woman.

When I am alone, working on my art, the work may be going well—or it may not, but my obsession with it takes me back to that illustrator of 20,000 years ago, telling pictures in stories.

This article was originally published in L. Ron Hubbard Presents Writers of the Future Volume XI

If one merely looks at the biographical sketch, one sees that Bob Eggleton was born in Concord, MA, in 1960 and became interested in science fiction art at an early age. He is a prolific illustrator in science fiction, whose work can be seen in many of today’s most popular magazines and on many book covers. He has received numerous awards, including several Chesleys along with 8 Hugo Awards for Best Professional Artist. But the cold biographical data doesn’t fully describe Bob Eggleton. For it can’t completely convey how Bob, who has helped judge the Illustrators of The Future Contest since its inception, gets excited about his art. The biographical data doesn’t express the enthusiasm, the almost manic joy that sweeps across his face when he talks about his work. His driving passion has led him to become an artist whose name is now recognized by those who have even the most modest acquaintance with the science fiction field.

The Problem of the “Told” Story