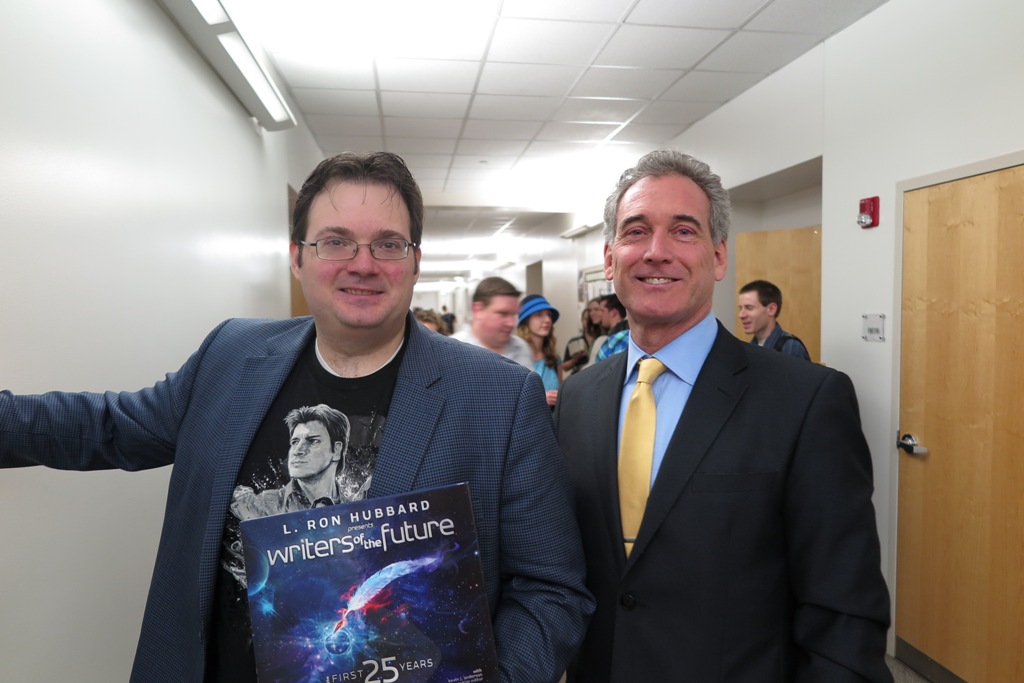 Provo, UT – International best selling fantasy author, Brandon Sanderson, best known for his “Mistborn” series and his work in finishing Robert Jordan’s epic fantasy series The Wheel of Time, has now become a judge for the Writers of the Future contest it was announced by John Goodwin, President Galaxy Press.   Goodwin was on hand making the presentation of the Writers of the Future creative writing unit plan to Sanderson and his class of approximately 100 students at Brigham Young University while already in Salt Lake City for the FanX Convention this past weekend.

The creative writing class was then briefed on the history of the Writers of the Future Contest, which was created by bestselling author L. Ron Hubbard in 1983 as a continuing effort on his part to help keep the genres of science fiction and fantasy alive by providing a means for aspiring writers to have a chance for their creative efforts to be seen and acknowledged.  The success of the merit based competition was easily described to the class by naming just a few of the scores of successful professionals who embrace the Contest, from Orson Scott Card (Ender’s Game) and Dave Wolverton  aka David Farland – (Runelords) who won the Contest in its 3rd year, to World Fantasy Award winner Tim Powers (On Stranger Tides) and multiple Hugo award winner Larry Niven (Ringworld), and to winners Patrick Rothfuss (Name of the Wind) and Nnedi Okorafor (Who Fears Death).  (For a complete listing of the names of Contest judges, go to www.writersofthefuture.com/writer-judges and Writer Contest winners go to www.writersofthefuture.com/writer-winners.)

It was at this presentation that Sanderson indicated that he had entered the Writers of the Future Contest as a novice having submitted one of three short stories he had ever written and impressively coming away as a Finalist on his first submission.

Following this class, Sanderson agreed to be a judge for the Contest as he was in full agreement with the Contest’s purpose.

Upon hearing the news, long time friend and long-time Writers of the Future Judge Orson Scott Card noted, “Brandon is one of the best writers to emerge in the last ten years. Glad that he’s going to be a judge!”

For more information about Writers of the Future, go to www.writersofthefuture.com.