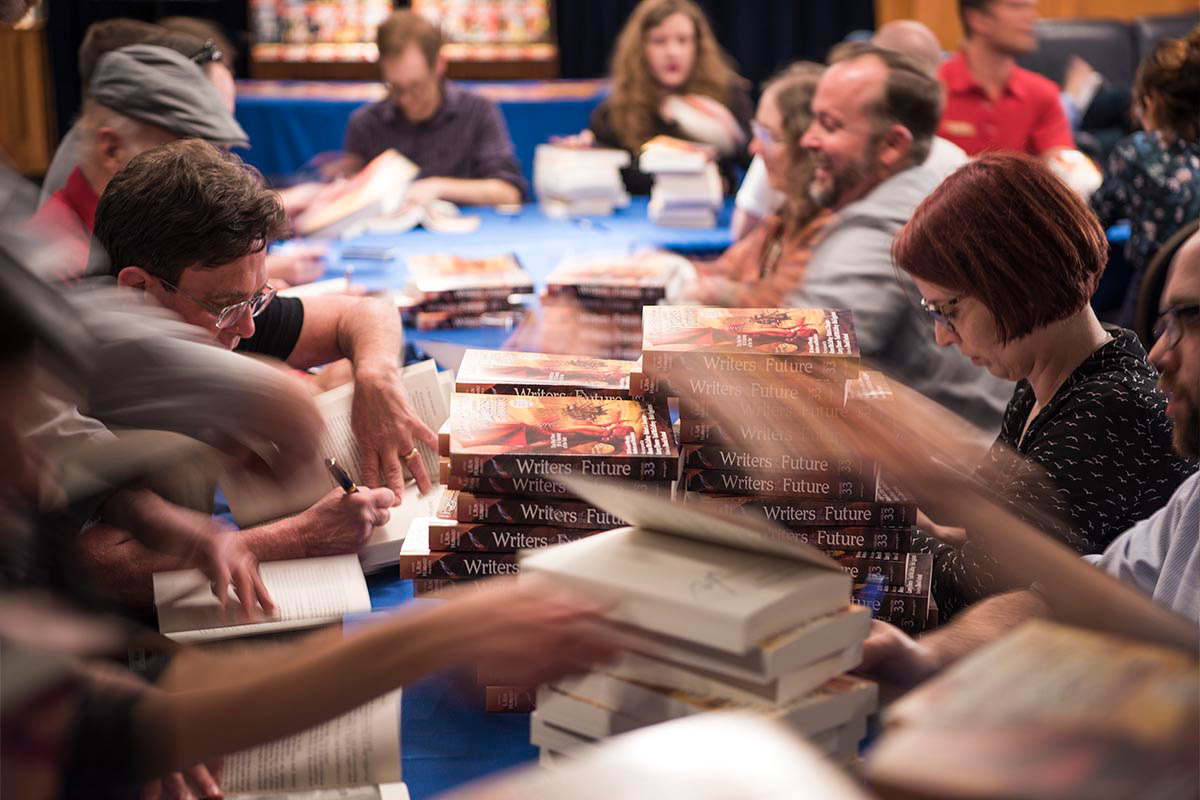 The group is dragging a bit today. If you’ve read yesterday’s blog, you’re not surprised by this. It’s been a couple jam-packed days and late nights in a row. “I think I hit a wall today,” said Ziporah Hildebrandt (2nd place, Q4). Of course, you couldn’t tell it by the way she went about the day. Same thing with David VonAllmen (one of our two published finalists from St. Louis). A few days ago he was commenting that the pace of the week itself isn’t too tough, but today he told me that the information flow is amazing, so amazing. “There’s this steady flow of really smart people telling you things you really want to know,” he says.

That’s kind of the thing here, you know?

The pressure of the moment isn’t bad at all, but the experiences just keep on coming and coming until you feel like you’re trying to catch a river.

Today is Friday, though, which means first up is a workshop session where three of the “24-hour” stories are going to be critiqued. The specific stories are selected at random, or if you believe the legend Dave Farland throws the manuscripts down a set of stairs and Tim Powers goes and picks up the three that make it the farthest down the way. Sounds like as good of a way of doing it as any, eh?

For each of the manuscripts, each winner gets two minutes to comment on the story. Once they’re finished, Tim Powers and Dave Farland take the floor to provide their thoughts. I love this part because every manuscript has someone who says “I can’t believe this is a first draft written in 24 hours.” Literally, all three manuscripts under discussion had someone comment that they felt it was publishable as is. Much fun. Afterward, some of the winners tell me this critique session was different from others they’ve done. “Two minutes,” said Doug Souza (1st place, Q2) when I asked what was different. He proceeds to talk about trying to structure comments to fit the time, and how suddenly two minutes goes by in a flash. Others talk about the quality of the stories. Some are disappointed their manuscripts weren’t randomly selected, others were happy theirs weren’t. One of the selected stories is titled “[Untitled].” The group has much fun with that.

If anything, I think this session shows exactly how tight this group of winners is becoming. I’m guessing there are several long-term friendships beginning to form this week, and I think that’s pretty cool to watch.

After lunch, Robert J. Sawyer spent an hour talking about focusing your efforts on a theme, on research, and on how to think about doing what I’ll call “big books.” This was a fantastic talk, using some of the greatest works in Science Fiction’s history to cement his concepts.

Then Mike Resnick discussed contracting, business, science fiction fandom, selling to Hollywood, and (of course) Lara Croft. Seriously. You had to be there. [aside: all right, sorry to be that guy who does the in-talk, but when the winners get around to reading this, they’ll like it … sorry about that].

Nancy Kress finished the afternoon with a fantastic conversation wherein she discussed three personal breakthroughs her career has been formed by, giving some advice on how to fit a writer’s life into a personal life (copious notes were taken by many winners there), and her one soapbox topic—making science really work.

Each of the three had great Q&A sessions that could have gone on longer if Tim Powers hadn’t put his foot down and moved the group along.

Picture about 15 full-sized work tables lined on both sides by maybe 40 writer winners, illustrator winners, and judges. Picture a palate of over 300 trade paperback. Picture maybe ten helpers turning pages to help the flow of those 300+ books go from one end of the tables to the next in roughly an hour. Imagine all those winners in need of hand massages at the end of the process. I spent a chunk of my time taking books from Molly Elizabeth Atkins (another St. Louis published finalist), finding page 362, and passing them to artist Joshua Meehan so he could sign the illustration he did for Robert J. Sawyer’s “Gator.” Along the way, Molly kept a running conversation going about how her signature was going (“Oh, that’s a good one!” or “Oh, no!”). Similar conversations came from others. Ville Meriläinen (2nd place, Q3) and Sean Hazlett (2nd place, Q1) sat next to each other and occasionally augmented their signatures with an extra little surprise for a few lucky folks.

The whole event is raucous and loud. Across the way judges Mike Resnick and Jerry Pournell are trading stories. Jerry says he wants a shorter signature, and someone says just to use “JP.” He just sticks with “Jerry Pournell,” which seems to make a whole lot of sense. I mean, if I was Jerry Pournell, I think that’s how I would sign my books. [grin] Judge Kevin J. Anderson is at the far end of the room, cracking jokes. Rumor says he had the record for biggest book signing of all time until some guy named Dave Farland overtook him. Hmmm … wonder where he is these days? Oh, right. He’s at the other end of the table.

At one point, I step back and look at this with a little detachment. When you think about this, it dawns on you that these winners are sitting in a room, signing books with some of the biggest names in the industry.

Bottom line: The whole event is raucous and loud. A considerable amount of fun.

When that’s done, the group goes upstairs for dinner on the roof. It’s a casual event, burgers and hotdogs and sausage and chips and potato salad and dessert and … fantastic conversation that ranges from writing topics to dogs to kids to rock music and bagpipes played in empty cemeteries. Yes, you read that right.

When that’s done, the gang slowly disburses back to the hotel where they will undergo a final fitting for dresses and tuxes.

The whole thing comes to a close at 10:00. All total, it’s just another day of catching rivers at the Writers of the Future Workshop.

Tomorrow, of course, starts at 9:30 AM sharp. Here’s the link to the photos for the day.

Illustrators of the Future Workshop 2017 – Day 4
Scroll to top