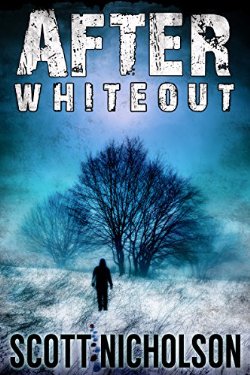 “After: Whiteout” by Scott Nicholson

Scott Nicholson, grand prize winner in the 1999 Writers of the Future Contest and published in L. Ron Hubbard Presents Writers of the Future Volume XV, releases “After: Whiteout”. After seeing his winning story, “The Vampire Shortstop” published in the annual anthology. Scott has been routinely releasing stories since his win so many years ago.
Nicholson’s latest novel, “After: Whiteout” is the fourth book in the bestselling thriller series. In the harsh winter of a post-apocalyptic landscape, Rachel Wheeler and her companions hole up in an Appalachian compound established by her notorious grandfather.
A rogue military platoon plans to seize the compound and control the small band of survivors. At the same time, violent mutants organize into a tribe that threatens to wipe out the human race. Rachel is caught in the middle as she undergoes mutations herself, driven by an urge to kill those around her while drawn to the mysterious Zapheads.
Fleeing the compound in a snowstorm, she discovers the mutants are more than they appear to be. But will she remain human long enough to use their secrets against them?
Look for the other After books, First Light (After #0), The Shock (After #1), The Echo (After #2), and Milepost 291 (After #3). Also look for the spinoff series, ZAPHEADS, written with Joshua Simcox.