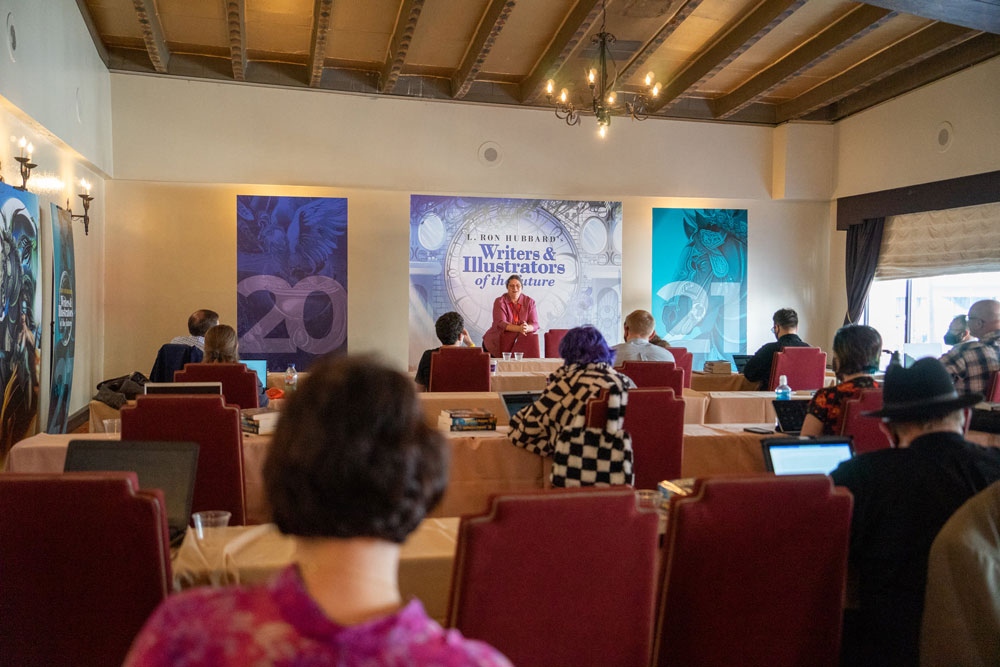 The morning launched with John Goodwin, president of Galaxy Press, reminding the writers why L. Ron Hubbard founded the Contest. He was passionate about storytelling and wrote fiction in all genres. Goodwin opened the book L. Ron Hubbard: The Shaping of Popular Fiction and unfolded its four-page interior spread showing all the pulp magazines that contained L Ron Hubbard’s stories during the Pulp Fiction Era. Magazine covers include Astounding Science Fiction, Western Story, Argosy, and Detective Fiction Weekly. He published over two hundred short stories between 1929–1951.

The morning program shifted to hour-long presentations by the Contest judges and guest speakers. Jody Lynn Nye (Mythology series) talked about brand. “Your brand is you.” She looked out over the room. “Wulf Moon is your brand. Nina Kiriki Hoffman is your brand. Tim Powers is your brand. These are all good brands.”

Nina Kiriki Hoffman (The Thread That Binds the Bones) followed by handing each in the group the gift of a 20-sided die and a set of worksheets. It wasn’t D&D. Hoffman proved to be a different kind of dungeon master, but monsters (and more!) were still created through her worksheets and rolls of the die.

Next was Lezli Robyn, editor of Galaxy’s Edge magazine. She stated that she owed her career to being mentored by Mike Resnick (Kirinyaga), a late judge of this Contest, and how she mentors others as an editor. I am certain the winners were happy to hear Lezli say they had an open door to submit to Galaxy’s Edge magazine.

Nancy Kress (Beggars in Spain) spoke on the subject “Things I Wish I had Known 45 Years Ago.” She advised to do worldbuilding before writing and recalled strong counsel from a writer friend on one of her works. He said, “It doesn’t hang together for me because it doesn’t have economic underpinnings.” After licking her wounds for a few weeks, Kress said she agreed he was right and wrote her next book, Beggars in Spain.

S.M. Stirling (Draka series) said talent is relatively cheap, and that persistence is key to a publishing career. Stirling warned of the danger of many writing groups when they don’t include professionally published writers.

Eric Flint (Ring of Fire) echoed those words. “Writers’ groups—most writers’ groups—have people in them that have never actually published anything, and yet they’re telling you what you’re doing wrong.”

Toni Weisskopf, publisher of Baen Books, did a Q&A session. The writers asked questions about how the submission process works and the type of novels she buys. However, my favorite question was from John Goodwin: “Why did you choose to be the guest speaker at our gala?” Weisskopf listed two reasons. “First, because my friend, A.J. Budrys, was a founding judge. I got to see this Contest happen when it was just a gleam in L. Ron Hubbard’s eyes, and he got AJ involved. Second, I’ve published a lot of your writers, and I get to meet them while being here. We also work with a lot of your judges and Contest coaches.”

The workshop ended with a Q&A session with former winners Eric James Stone, Darci Stone, Martin Shoemaker, Kary English, Steve Pantazis, and myself. It was interesting to see how many different directions each had gone, from traditional publishing, indie publishing, hybrid, voice-over work, nonfiction books on writing, teaching writing workshops, and more. We were asked for advice on how the winners could best leverage their win at Writers of the Future to advance their careers. The Stones talked about selling movie rights; English shared the value of selling stories on Amazon after the initial sale; Shoemaker advised that all take advantage of “bar con” to get to know the judges; Pantazis spoke on book bundles and rapid release of novels; and I advised them on how to sell books at book signings. We closed by wishing them Godspeed on their careers.

Winners were dismissed for dinner and then whisked away to the Taglyan Center’s grand ballroom for award ceremony rehearsals. The ballroom and its stage rival the grandeur of the Oscars, and there’s a reason for that. If any doubted their accomplishment before this event, none will now. The winners are indeed worthy of celebration and honor.

We invite all to celebrate with them by watching the live-streamed event Friday, October 22, 2021, at 7 p.m. (PDT), right here at WritersoftheFuture.com!

The workshop’s goal is to give the illustrators the skills they need to thrive in the world of professional illustration, and that means knowing how to curate a portfolio and present it to a client. With Echo and Lazarus Chernik playing the role of the clients, the illustrators started their day with mock interviews. Each illustrator presented their work and received coaching not only on their artwork but also on their interview and presentation skills.

The mock interviews became immediately useful once Toni Weisskopf, publisher and art director for Baen Books, arrived. Weisskopf believes that art is integral to speculative fiction. “It’s a necessary part of presenting the literature,” she said. A book cover must make the reader think, “Wow, that looks like fun. I want to read that!” Her job as publisher and art director is to facilitate that process because the cover forms the primary sales piece for the book.

Weisskopf showed the illustrators several slides of cover art with and without type. She commented on things like color harmony, tone, and text placement. After reviewing what Baen looks for in covers and cover artists, Weisskopf sat for portfolio reviews with every illustrator interested in doing cover art.

The artists returned from lunch for a video of contest judge Rob Prior. Prior used to be a photorealist, but burned on the hyper-realistic style. Now his work is loose, vibrant, and immediate, using mixed media, inks, airbrush, Windex, and splatter techniques to pull evocative, realistic faces out of abstract backgrounds.

Prior, who paints with both hands at the same time, painted characters from Star Wars, Game of Thrones as well as several big-name hip-hop artists, and frequently paints live, on-stage with the rapper Tech N9ne.

Illustrator Brian C. Hailes (Contest winner from 2002) has been writing and illustrating for 20 years. A graduate of the Academy of Art in San Francisco, Hailes believes that his education was a means to an end. “I wasn’t taking art classes to get a grade. I was taking art classes to get published.” He told the illustrators to “do your own thing. With the art world, you need a name, and you get the name by doing your own thing.”

Hailes also recommended that the illustrators learn graphic design. Graphic design work can lead to a good living, but the principles of design also contribute to stronger illustrations.

Dan dos Santos gave a master class in composing with color and light. For Dos Santos, the heart of composition comes down to contrast, to discrepancies between different elements of the illustration. Bigger vs. smaller, blacker vs. grayer, warm colors vs. cool colors—the mind is constantly making comparisons and measurements, so discrepancies attract attention.

Dos Santos started his presentation with the concept of value contrast, how light or dark something is. He used simple slides, followed by finished artworks, to demonstrate how manipulation of relative lights and darks can move elements into the foreground, push them into the background, or create a focal point.

Dos Santos says that when a piece isn’t working for him, he stops and looks at the piece in black and white. If the values don’t work, the piece doesn’t work. Most of the time, that alone solves the problem.

Wulf Moon wrote his first science fiction story when he was fifteen. It won the national Scholastic Art & Writing Awards and led to his first professional sale in Science World.

Moon is podcast director at Future Science Fiction Digest. Discover his work at: amazon.com/author/wulfmoon. Find him on Facebook or visit his website and join the Wulf Pack at driftweave.com.

Winners Announced for L. Ron Hubbard Achievement Awards for Writers of the Future...