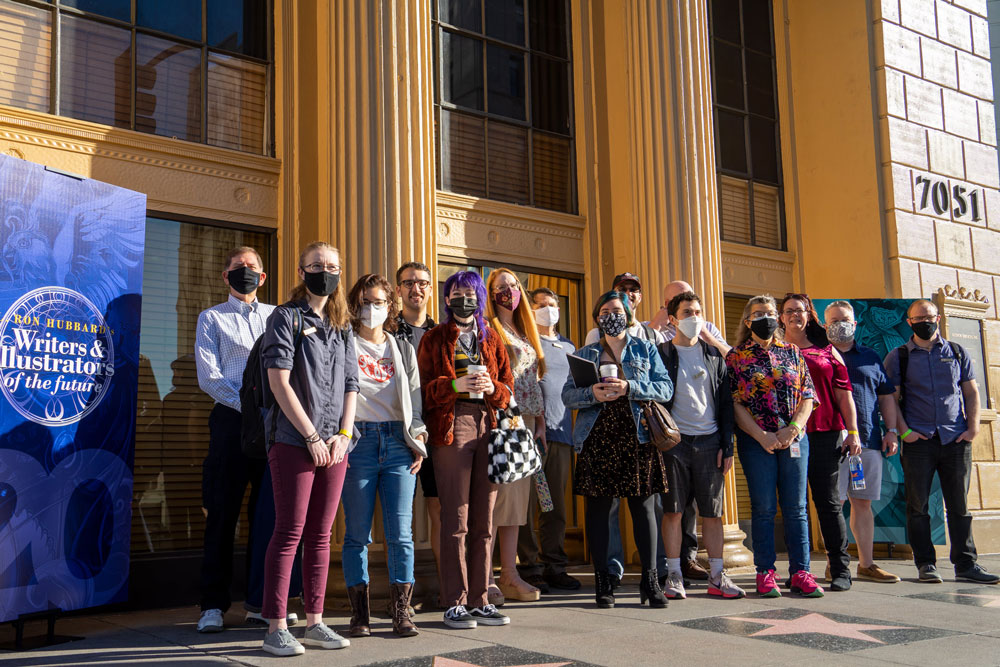 Day Two of the Writers of the Future Workshop began with brilliant California sunshine lighting up the Hollywood Roosevelt Hotel. Contest coordinator Joni Labaqui led the winners on a brief walk down the Hollywood Walk of Fame for a group photo in front of the pillars of the Author Services building. Headquarters for the Contest is on the fourth floor, where winners were greeted with “bonjour” in a lovely French accent by receptionist Sophie Bartczak. Even wearing a mask, you could see by the sparkle in her eyes that she was smiling. “I’m so happy to see everybody,” she said. At long last, the workshop with its writers had returned.

Joni Labaqui led the winners into the L. Ron Hubbard Library, and Executive Director Gunhild Jacobs gave a warm welcoming speech. Joni followed with a tour of posters, displays, and awards won through the prolific writing history of the Contest’s founder.

The tour continued into the paneled Writers of the Future library itself, bookcases brimming with the published works of Contest winners and judges. Joni encouraged winners to send her any future publications for display in the library.

A wall displaying the images of past and present Contest judges was presented by Joni including photos of writer icons like Larry Niven, Jerry Pournelle, Anne McCaffrey, Patrick Rothfuss, Kevin J. Anderson, and Brandon Sanderson.

Another wall displayed moments from the Contest’s thirty-seven-year history, including a photo of the first awardee to walk across the Contest’s stage: Dean Wesley Smith, now a bestselling author and Contest judge himself! Joni pointed to another photo of a shuttle launch and related that she attended the event along with Contest judges and that year’s winners. After the rocket liftoff, Jack Williamson leaned over and said: “Joni, I’ve been writing about this all my life, but I’ve never imagined it like this.” After discussing photos from various Contest events featuring writers like Isaac Asimov and Ray Bradbury, Joni pointed to one with Mark Hamill and said: “Even Luke Skywalker himself has been to this event!”

The morning concluded with a video presentation in the L. Ron Hubbard Theater. The production featured recordings of Mr. Hubbard’s lectures on writing with period reenactments and photos from his travels. He said in his day, many professional writers were shunned by the literary world because they didn’t just talk about writing, they actually wrote. “It never occurred to professors that writers write,” Hubbard said. He stated that if you sold your stories, you were considered a pariah. He never let that atmosphere stop him, writing a phenomenal 100,000 words per month. The message of the presentation? Professional writers write.

As the bright-eyed writers returned to the Roosevelt, Author Services PR representative Claude Sandoz stated: “It’s always very inspiring. It’s beautiful to see the next crop of writers discovered by this Contest. They all come here with the desire to learn what’s next, and we want to help them. These are the writers that will create the future. They don’t know it yet, but their works will influence our society and its development.”

The afternoon workshop began in the hotel’s Academy Room with instructors David Farland (Runelords) and Tim Powers (On Stranger Tides) on a discussion of storytelling prompts for the upcoming 24-hour story exercise. David Farland stated that for a professional writer, writing on demand is part of the job. He related that most hobby writers wait for the muse to strike before they go to work on a story. In contrast, working writers go to work, knowing inspiration will come. He cited his own example where Dean Wesley Smith (Poker Boy series) called needing a story written overnight for one of his publications. David agreed. Dean said it’s an anthology about unicorns, so he needed a unicorn story. David said okay. It had to be SF. David said okay. Maybe cyberpunk. David said okay. With the theme of immortality. David said okay, and with no further stipulations (whew!), he went to work, turning in the story the next day as promised. Dean said, “Wow, this is amazing. You did this overnight?” Even Dean Wesley Smith was surprised, but as David said, writing on demand is part of the job.

• Discuss the idea with your assigned writing buddy during the workshop.

• They must use a physical object he would provide as their story prompt.

At that point, he drew items from a bag for each writer, including a matchbook, a token awarded for a period of sobriety, another item he said could have belonged to Phillip K. Dick (they were good friends), and other small items handed to each that might seem inconsequential, but were to be woven into the story.

Writers were told not to view this as a throw-away exercise—many winners from past workshops had sold their 24-hour stories.

The rest of the afternoon focused on a variety of writing advice, such as plotting stories, and basic story elements writers should be cognizant of as they write, including knowledge of “the hero’s journey.” Tim Powers advised writing a biography page for each character in a story. He said to ask them any trivial question one could think of, such as why the character is a vegetarian. Write down the answer, but he said the first answer is never the true answer. He said go back and ask, “No, why really?” Oftentimes, the pay dirt is there.

David Farland followed with one of the most important questions a writer needs to answer about their hero. “What does the hero care about so deeply that they would give their life for it?”

David ended the afternoon session with a quote by Algis Budrys (Rogue Moon), the Contest’s first Coordinating Judge. Algis recommended writing about characters confronted with problems, but that writers shouldn’t set out to feature a theme. David said it’s not a rule, but a prejudice of his, that writers shouldn’t blatantly create a story because “they have something to say.” Tim Powers agreed, adding: “If I see it developing on its own, great, it means it’s happening on its own organically.”

Stay tuned for writing lessons learned tomorrow before writers are launched to write their 24-hour stories!

Houston, we have lift-off!

Aspiring illustrators from around the world arrived in Hollywood today for the annual L. Ron Hubbard Illustrators of the Future workshop. Each illustrator is a quarterly winner in the world’s largest contest for aspiring artists. They’ve already won a cash prize, a week-long workshop, and a spot in an awards ceremony that rivals the Oscars, but they’re not finished yet. There’s one prize left to win, and that’s the Golden Brush Award, which comes with a cash prize of $5,000.

Now in its 32nd year, Illustrators of the Future workshop offers a combination of craft, business, and marketing skills aimed at taking the illustrators’ careers to the next level. Sample topics include color harmony, composition, professionalism, social media marketing, interview techniques, and how to think like an illustrator.

We’ll catch up with the illustrator workshop tomorrow for Day 2.

Wulf Moon wrote his first science fiction story when he was fifteen. It won the national Scholastic Art & Writing Awards and led to his first professional sale in Science World.

Moon is podcast director at Future Science Fiction Digest. Discover his work at: amazon.com/author/wulfmoon. Find him on Facebook or visit his website and join the Wulf Pack at driftweave.com.