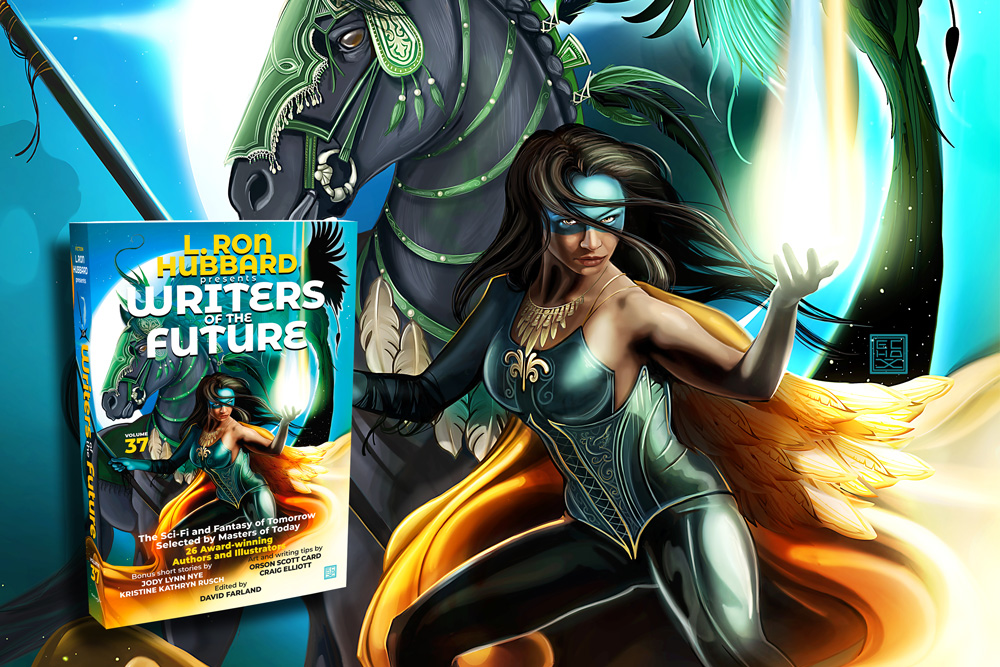 The cover for L. Ron Hubbard Presents Writers of the Future Volume 37 was revealed this weekend in an online event with guests spanning the globe. [Watch the event here.] Echo Chernik, Illustrators of the Future Coordinating Judge, and the cover’s artist, Jody Lynn Nye, Contest judge and author of “Phoenixes War,” a short story inspired by the cover art and included in the upcoming volume, made the presentation. John Goodwin, president of Galaxy Press, publisher of the fiction works of L. Ron Hubbard, and the Writers of the Future series, hosted the event.

The presentation of the new cover took on special significance this year. Winners of Writers of the Future Volume 36 were unable to attend the annual workshop and gala awards ceremony in Hollywood last year due to the pandemic. As a result, this year would see a combined awards event for Volumes 36 and 37, the first time in the history of the Contests. So Echo used the same cover elements for both covers in recognition of this unique occurrence.

Jody Lynn Nye, known for her epic fantasy series The Dreamland, discussed the inspiration of Echo’s art for both Volumes 36 and 37 and the writing of the short stories they inspired, stated in the reveal event, “As a judge, I get to see stories that are submitted by people from all over the world, over 150 countries, and the quality of the stories I get is surprisingly high, surprisingly delightful.” She continued, “I wanted to have a crack at writing something that went with one of Echo’s beautiful pieces of art. And I have been privileged to be included in what’s coming up for Volume 37.” Jody concluded, “I could never have foreseen when I did the story for [Volume] 36 based on that piece that I’d have the chance to follow the characters forward and have such an awesome inspiration.”

The world-renowned cover artist for Volume 37, Echo Chernik, specializing in art nouveau-influenced poster design, advertisements, package design, and book covers spoke of the diversity of talent included in the upcoming anthology. “The best part is the illustrations in the book because the entire obligation of the cover artist is to get people to pick up this book and flip through it and then see the amazing art inside.” She went on, “The work for this year and for [Volume] 36 is just phenomenal. I get to art direct and work with the artists on each of their pieces to try to get them to be the best that they can be. I really believe in inspiring and working with each artist to get their own personal style to be strong and to really strengthen that.”

Attendees of the online event were quick to make known their excitement for the cover art.

M. O. Muriel is one of the very few in 37 years to win both the Writer and Illustrator Contests and the only one to win them back to back. She watched the online event and stated, “Each year, there are several ‘reveals’ associated with the Writers and Illustrators of the Future Contests, as they celebrate the release of their next new anthology full of winners. My favorite set of ‘reveals’ has always been those featuring the Contest artwork—both external cover art for the anthology, as well as the 12 Illustrators of the Future winner’s internal art for the 12 winning stories.”

L. Ron Hubbard initiated the Writers of the Future writing contest in 1983 to provide “a means for new and budding writers to have a chance for their creative efforts to be seen and acknowledged.” Based on its success, its sister contest, Illustrators of the Future, was created five years later to provide that same opportunity for the aspiring artist.

Your Altered World: A “Scientific” Approach to Writing Fantasy

Writers of the Future Volume 37 Cover Reveal
Scroll to top