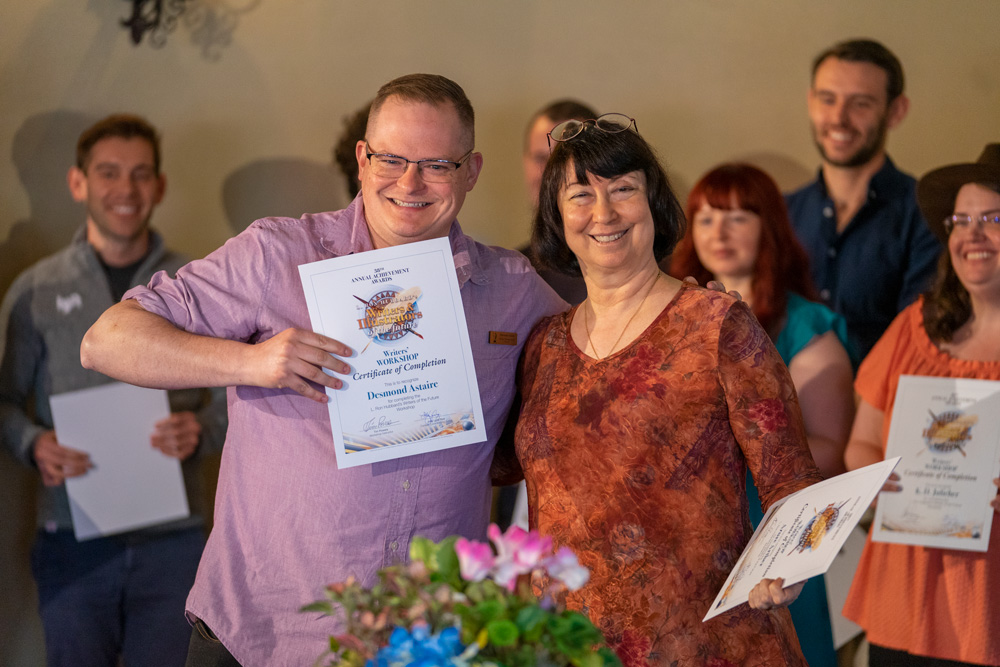 After an amazing gala premier for L. Ron Hubbard Presents Writers of the Future Volume 38, the writer and illustrator winners partied late into the night. So they had the morning off to rest and recuperate. But the celebrations weren’t over! There was a surprise birthday event for this year’s keynote speaker, Lt. General (Ret.) John F. “J.T.” Thompson U.S. Air Force and former Commander of the U.S. Space Force’s Space and Missile Systems Center at Los Angeles Air Force Base. John Goodwin, president of Author Services, Inc., presented the general with an autographed deluxe edition of The Way of Kings by Writers of the Future judge Brandon Sanderson.

John Goodwin on Presenting and Promotion

After lunch, the writer and illustrator winners joined for a final day of lessons on a crucial topic for creators: presenting and promoting yourself and your work. John Goodwin opened with a discussion of public relations, which can be seen as a tool to persuade people to think or behave differently. He explained the three basic kinds of PR:

John then discussed purposeful communication, forming a message that leads from cause to effect. Done well, this will engage the listener in an ongoing conversation. An important early goal is to find the listener’s view on science fiction and fantasy, to learn what interests them about the subject, and then craft your approach to fit that. If you can get on the same page with them, you can hold their attention.

John finished with a discussion on “word of mouth,” which is superior to all other methods of publicity, and is the goal of other methods. You want your message to reach people who will echo and amplify it. Then he turned the class over to Carmen Bartolo from media relations at Galaxy Press, who will arrange media interviews for the winners. He explained the interview process, and how “local artist/writer does good” is an appealing story for local media. He encouraged winners to keep him and the Contests informed on all their writing news, so that Author Services can help promote their successes.

Next, Writers of the Future Contest Coordinating Judge Jody Lynn Nye and Bill Fawcett taught the winners about elevator pitches: how to present and explain yourself and your work in the time of a brief meeting. Then they gave the winners an exercise: writer winners wrote an elevator pitch for their story, and illustrator winners wrote pitches for their art skills and capabilities. Then the judges reviewed and made suggestions.

After the elevator pitches, Blake Casselman, Director of Programming at Fanx Salt Lake Comic Convention, instructed the winners on the Dos and Don’ts of attending conventions as a professional. You need to sell yourself to the show, which includes talking encouragingly about your awards and credits. He gave three tips to being an asset to a convention:

He further advised not to come across as obnoxious. Be responsive, professional, and kind.

Once you’re accepted at a convention, it’s time to be a presenter, either alone or as part of a panel. When you do, let the information that you share sell yourself and your work. Don’t make pitches. And always finish with telling them where to find you and how to learn more.

Next Writers of the Future first reader Kary English, who has been chronicling the writer winners all week, addressed the combined group with final words of encouragement. She was followed by radio interviewer Joe Montaldo, who gave them tips on how to interview.

Go Forth and Conquer!

John Goodwin returned to close out the week. Winners received their certificates of completion for the workshops, marking the end of an amazing week … and the beginning of some amazing careers!