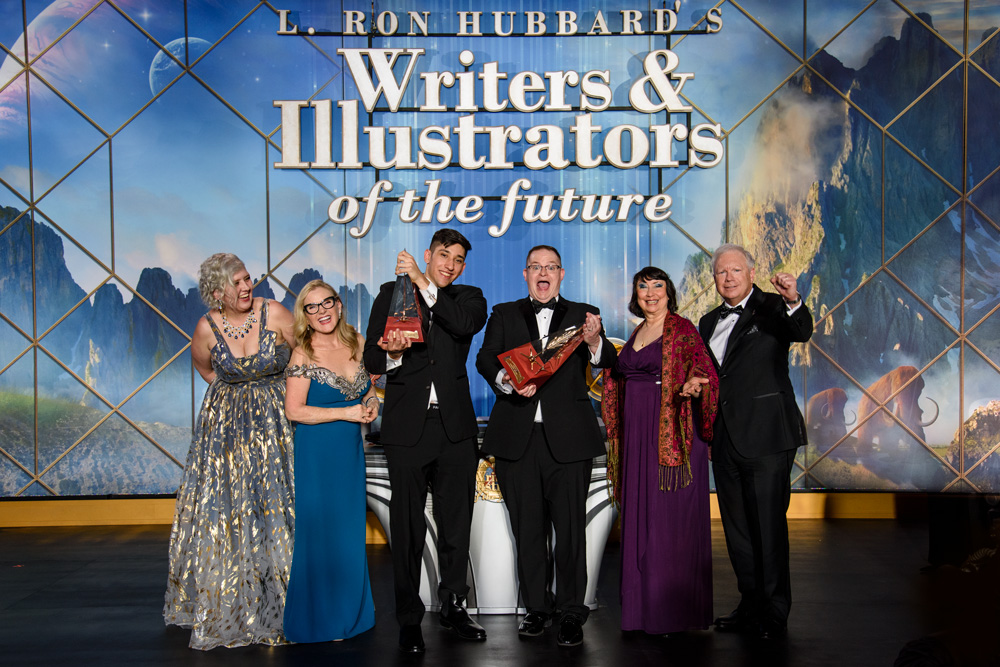 As Gunhild Jacobs, Executive Director of Author Services, Inc. noted, it feels like we were just here—and we were. The 38th annual L. Ron Hubbard’s Writers and Illustrators of the Future Award event took place on April 8, 2022 in the Taglyan Complex in Hollywood, only six months after the combined event for Volumes 36 and 37.

The day began with professional hair and makeup for the winners in preparation for the black-tie gala. Limousines took the winners and judges from the Hollywood Roosevelt Hotel to the Taglyan Complex, where a huge statue of the mammoth that strides across the cover of Volume 38 greeted them on the red carpet. While guests arrived, winners and judges walked the red carpet, giving interviews and getting photos taken.

When the doors to the ballroom opened, all were treated to a view of the gorgeous blue ceiling and the beautiful, carefully crafted stage against the backdrop of the landscape on Volume 38’s cover. Sumptuous dinner and dessert followed.

Every year, the award event is opened by a unique performance. This year, Jesse L. Stevenson lent his voice to a sung rendition of “Men of Reason,” a poem by L. Ron Hubbard. A beautiful memorial to David Farland/Wolverton, the previous Writers Contest Coordinating Judge, was played after the song and an event-opener video. Following the memorial, Jody Lynn Nye was introduced as the new Writers Contest Coordinating Judge, and Dean Wesley Smith was introduced as the new anthology editor.

The winners’ speeches began with the awardees from Volumes 36 and 37 who were unable to attend the previous year’s event and then launched straight into the Volume 38 winners. Each took the stage with great poise and to the delight of the crowd. The speeches bookended a keynote speech by Lieutenant General John F. Thompson of the Air Force who spoke about the influence of science fiction on our future in space. And a visual presentation of L. Ron Hubbard’s poem “Declaration of Peace” added to the evening’s celebration of words and art.

With the gala finished, the winners signed the newly released anthology for guests and attendees, who bought their copies just outside the Taglyan ballroom. All attendees—guests, judges, and winners alike—were brought back to the Hollywood Roosevelt at the tail end of a day of exhilaration, awe, and encouragement that any aspiring writer or illustrator would hope to take part in. 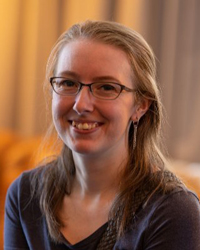 Leah Ning (Writers of the Future Volume 36) is a science fiction and fantasy writer, primarily putting out short stories but hoping to someday publish some novel or other.

She currently live in Virginia with her lovely husband and two cats, a dog, and a pair of sugar gliders. They’re exactly as cute as they sound, and you will not regret Googling pictures of them.

She hangs around on Twitter quite a bit @LeahNing ! She mostly shouts about books and stories, with the occasional pictures of the aforementioned animals.