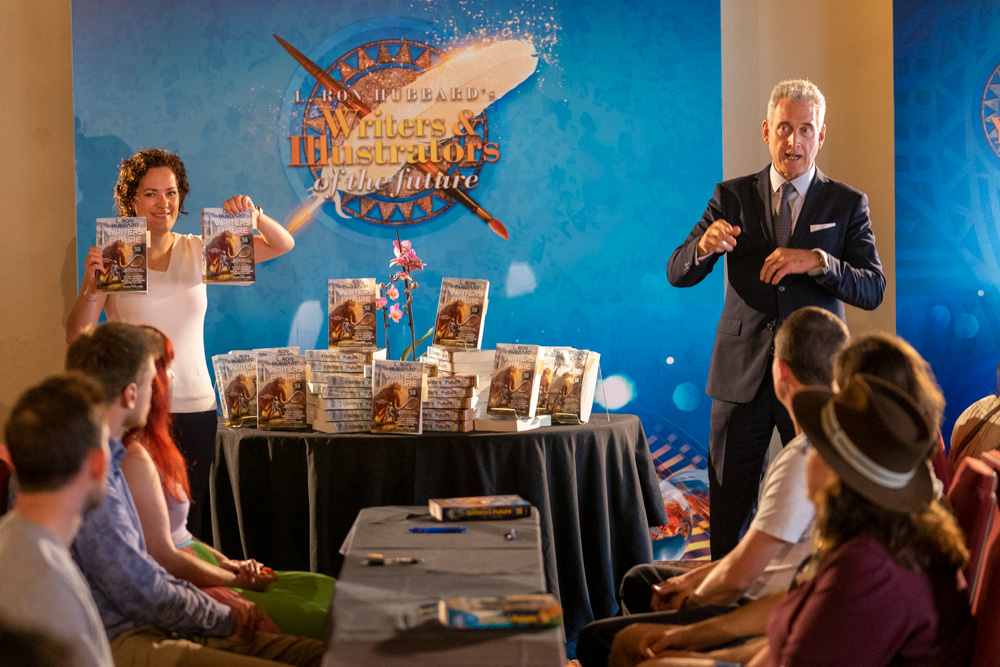 The writers started their morning by giving and receiving feedback on their 24-hour stories. Instructors Jody Lynn Nye and Tim Powers gave a brief introduction to copyright and Tuckerizations.

After lunch, Dean Wesley Smith, a New York Times bestselling author under multiple pen names, discussed the differences between sales and licensing, and gave the writers an overview of New York publishing and book distribution from the 1980s forward.

“In the 1980s, there were 30 or 40 publishers to sell books to,” Smith said. “Now there are four.” In the 80s, novels were 40,000 to 50,000 words, you sell a book across the table at dinner, and agents mostly handled your paperwork. New York publishers faced significant financial challenges in the 90s. Paper was cheap, and publishers learned they could charge more for longer books without increasing their costs by much. Novels went from 40,000 words to 90,000 words.

In 1996, book distribution collapsed. The industry went from 4,500 distributors to 12. By 1998, there were five, and now there are only three. This wiped out midlist authors. With such limited distribution, publishers only wanted bestsellers.

The advent of the eBook in the early 2000s changed the landscape again. The rise of Amazon’s Kindle reader created a vacuum where eBooks were cheap and easy to download, but traditional publishers were slow to transition to eBooks, thus paving the way for the indie publishing revolution.

Smith finished his remarks with a discussion of agents, indie publishing, and promotion.

The writer workshop rounded out the afternoon with a talk by sci-fi great and multi award-winner Larry Niven, author of Ringworld, The Integral Trees, The Mote in God’s Eye, Lucifer’s Hammer, and a great many more. Niven took questions and told stories from his illustrious career. He discussed collaborations, the changing expectations for how much science belongs on the page in hard SF, the atmospheric differences between Titan and Mars and his role in the birth of the 80s era Star Wars missile defense system under Ronald Reagan.

Illustrators of the Future judge Lazarus Chernik opened the morning with a discussion of working with international artists and markets, and then launched into Kickstarter from an artist’s point of view. He started by explaining the basics of a Kickstarter campaign. Then he discussed ways to build a list of potential backers and how to engage them.

Next Bea Jackson returned via Zoom to review some of the pieces resulting from last night’s assignment. She asked the Illustrator winners about their pieces and their process; and she also asked about their backgrounds, getting to know the artists we’ll be watching in the years ahead.

A Conversation with Larry Elmore

After Bea reviewed the works, Contest Coordinating Judge Echo Chernik introduced her hero and inspiration, Illustrator Contest judge Larry Elmore. Larry took the stage to share his experience and his humor, including his time with the pioneering game company, TSR. He described his poor childhood and how his passion for art was a sustaining element throughout. He finished with a long session of student questions. In the course of those, he described a defining lesson from his career has been “Do your best, and guess the rest.” He finished with an emphasis on drawing anatomy and other fundamentals such as perspective and the natural world.

Craig Elliott on a Career in Film Design

After lunch, Illustrator Contest judge Craig Elliott joined via Zoom. He spoke about successes and concerns in his work as a fine artist, a production designer, concept artist, and live-action film animator. He is currently working for Marvel Studios and explained the processes for production design and how illustration ties into film making.

The Journey of a Career with Tom Wood

For the final afternoon session, Illustrator Contest judge Tom Wood discussed the many different career paths of the judges, and then described his own career, starting with a fascination with rock band KISS, through work for major league sports teams, Disney, International Paper, NBA, NFL, MLS, Reebok, and other large clients to becoming the artist for Insane Clown Posse. One of his major messages was “Any time that you’re doing art instead of some other job, you’re getting better.”

After discussing his career, Tom went into detail (including videos) on his techniques he employs in his art projects.

All winners and judges joined to hold the “mammoth tome” for the first time and to sign 175 copies of Writers of the Future Volume 38.

Bonus: “The Professor Was a Thief”

Following the annual barbecue for all winners and judges, everyone adjourned to the Roosevelt Theater for a live radio performance of an L. Ron Hubbard classic, “The Professor Was a Thief.”