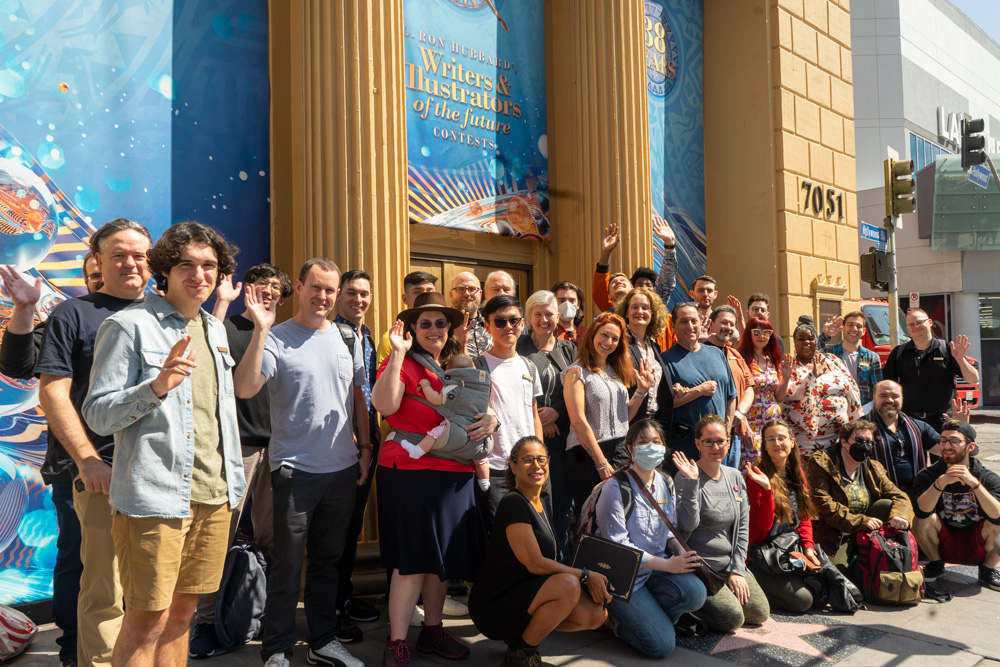 This morning’s workshops opened with the Illustrators and the Writers joining for the short walk to the Author Services building for presentations and a tour. Gunhild Jacobs, Executive Director of Author Services, Inc., introduced and explained the interplay between Author Services (literary agents for the L. Ron Hubbard estate) and Galaxy Press (publishers of Hubbard’s fiction works), and their cooperation on presenting the Writers and Illustrators of the Future Contests, the workshops, and the awards gala.

L. Ron Hubbard in His Own Voice

After that, the winners watched a brief video series on Hubbard as author and lecturer, “L. Ron Hubbard in his Own Voice.” It opened with a biography that explored Hubbard’s birth and youth, including exploring the world and serving in a variety of jobs to learn real-world work and life skills. This all fed into Hubbard’s philosophy that the best way to write authentically was to live and learn authentically, to work alongside people and write from that.

Then the video segued to a series of short audio essays from Hubbard on the practice of writing, highlighting the importance of work ethic, communication, and creativity. He spoke of many bad habits that stop writers from writing, and how simple changes in attitude and practice can turn someone who wants to write into someone who is regularly producing work and engaging readers. Hubbard’s long history of successful works serve as a proof of his philosophy.

A Tour of Author Services

After the videos, the winners took a tour of the ASI offices and saw exhibits of Hubbard’s books and manuscripts, as well as a library of books by Contest judges and past winners. The Reverend Fred Shaw of NAACP Inglewood, himself a science fiction writer and fan, spoke on the importance of writing and art in uplifting a community, and he presented awards from the local NAACP to the Contests and author winners Em Dupre and Azure Arther.

Back in the classroom, workshop instructors Jody Lynn Nye and Tim Powers gave the writers an overview of the publishing industry from the Big 5 to small presses and self-publishing. The writers learned about short story markets, how to write cover and query letters, and about SFWA and other helpful writer groups and agencies.

Tim Powers held a lengthy discussion of agents, covering how to research and approach an agent, situations where a writer definitely needs an agent, and times when a writer is fine without an agent.

Jody Lynn Nye spoke to the writers about conventions, discussing how to present on panels, professional behavior as a convention guest, book signings, networking, and self-promotion. Above all, Nye said, a writer should be on-time and a pleasant guest to fans, fellow authors, and con-runners alike.

With 2:00p.m. fast approaching, Tim Powers checked his watch and took a final few questions about the 24-hour story assignment. When there were no more questions, Jody Lynn Nye dismissed the writers, launching them into their 24-hour stories.

They’ll be back at 2:00p.m. on Tuesday with a finished story to share!

After lunch, Coordinating Judge Echo Chernik introduced her background and her work, discussing how she got started (primarily in advertising) and challenges she faced and resolved along the way. She spoke of how being responsive and professional are as important as talent in making satisfied clients who will bring you more work.

From there, she spoke on art paths and careers, and the breadth of ways to make a living in the arts: commercial design, typography, fashion design, architectural design, animation, industrial design, popular arts and crafts, intellectual property development, and more. She touched on fan art, home décor, gallery art, fine arts—and of course, illustration.

Your Personal Style Can Lead to Work

On the subject of style, Echo stressed that style is largely something that you develop naturally, without having to consciously create it. Over time, people will be able to recognize your work on diverse projects and subjects, and this can lead clients to remember you and your work when the right project arises.

Then she discussed negotiation and payment, as a prelude to more discussions later in the work, and how to balance different clients and needs while never forgetting your finances and rights. This led to discussions on copyrights, licensing, rights, and work-for-hire. From there she walked through the process of creating, approving, and signing a project, and then followed with a discussion of the course of work and communications over the life of the contract.

Next Echo discussed working with artists’ reps, both the benefits and the drawbacks, as well as ways to connect with art directors. That led to a discussion on branding, both in your work and in your personal presentation.

Following was a discussion of the artist’s Creative Brief, a list of details that you should ask and answer before committing to a job. Those form the basis of your contract, essential to all professional work.

Next Echo discussed outlets where you can display samples, and she talked about people you might work with as a client: art directors, creative directors, and owners. She discussed issues of client management and how to protect clients from their own worst instincts.

And a Little Fun!

Echo finished with a demonstration of her 3D virtual gallery on the Oculus system. She let the Illustrators tour the gallery using her headset while she discussed the future potential of this technology for artists.

In a night-time session, Michael Talbot (Illustrator winner from Volume 30) spoke to the winners about his time as a freelance illustrator, particularly books and children’s books. He gave useful guidance on things to consider when composing illustrations for children’s books. Then the Illustrators broke for the night. More exciting lessons will happen tomorrow!