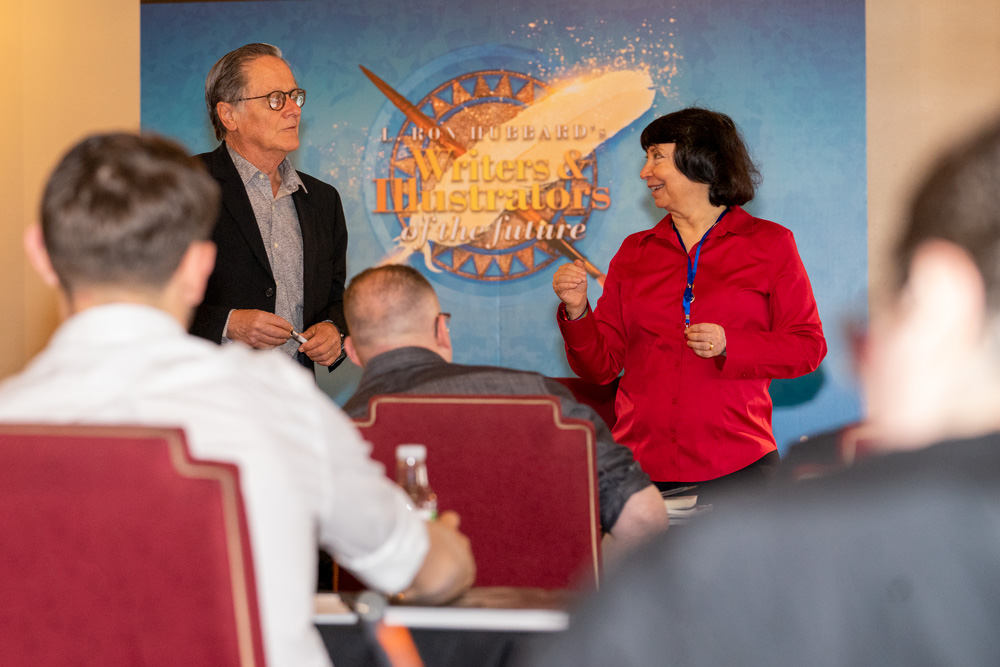 After an evening of homework and socializing, the writer winners returned to the classroom to dig into the elements of story. Starting with the dictionary definition of “suspense”—the growing excitement felt as a story, play, etc., builds to a higher point—workshop instructors Tim Powers and Jody Lynn Nye introduced the writers to tension and narrative hooks.

Narrative hooks and how to write a good opening

“Suspense,” said Powers, “must be incorporated from the beginning.”

Nye explained that a story’s opening should contain certain narrative hooks—questions that can only be answered by reading the rest of the story.

Nye and Powers used the opening line of John Scalzi’s Old Man’s War as an example.

On his 75th birthday John Perry did two things. First, he visited his wife’s grave. Then he joined the army.

This opening intrigues the reader by inviting the question “why would a 75-year old widower join the army?”

Nye and Powers explained the most manuscripts are rejected on the first page, so perfecting your hooks is a good way to keep editors and readers engaged in the story.

How to manage tension in your story

Once you’ve hooked the reader, keeping them means managing tension through the middle of the story. The main character needs a clear goal, something she wants or needs and will do almost anything to get. If the character achieves her goal without any obstacles, Nye explained, you don’t have a story; you have a vignette.

Tension requires conflict, and conflict requires obstacles. The more obstacles your character faces, and the more important the goal becomes, the higher the tension will be. Giving the reader a small breather gives you the chance to build and rebuild tension as your plot progresses.

After a short break, Powers and Nye gave each writer a random object drawn from hat—an empty bullet casing, a compass shaped like a turtle, a tiny cloth doll attached to a keychain. The objects act as prompts for the 24-hour story assignment as inspired by L. Ron Hubbard’s article “Magic Out of a Hat.”

After receiving their objects, Nye and Powers divided the writers into pairs. Then, as inspired by the L. Ron Hubbard article “Circulate,” each writer interviewed another, looking for details that might help them form characters or spark the plot or setting for their 24-hour story.

How to create characters for your story

One of the keys to creating interesting characters is to make them vulnerable. If a character can do anything, if nothing can hurt them, the character becomes boring. Vulnerability is Superman with kryptonite and Lois Lane. One makes him physically vulnerable, while the other makes him emotionally vulnerable.

Another key to interesting characters is to know them well. The better you know your characters, hero and villain alike, the more real they’ll feel on the page.

The writers will return tomorrow for a tour of the Author Services building, more on story construction, and then they’ll begin their 24-hour story!

Winning artists from England, India, Spain, and the USA flew into Los Angeles for an expense-paid week of instruction at the premiere science fiction and fantasy illustration contest, now in its 33rd year.

Behind the Illustrators of the Future Contest

John Goodwin, president of Author Services, Inc., welcomed the winners to their initial meet-up and gave them an overview of the week, which will start with lectures and hands-on exercises, proceed through portfolio reviews and one-on-one critiques from the Contest judges, and finish with a gala dinner and award ceremony where they will receive their trophies and the grand prize illustrator for Writers of the Future Volume 38 will be announced.

The Writers & Illustrators of the Future Contests were started by prolific writer, artist, photographer, musician, philosopher, and educator L. Ron Hubbard as his way to find and encourage new and talented creators of speculative fiction; and all of the judges and Contest staff are committed to continuing that vision. Mr. Hubbard’s philosophy of art, as quoted in his article entitled “Art,” is “Art is a word which summarizes the quality of communication.” In the upcoming week, these new illustrators will learn both the craft and this business of Art.

Mr. Goodwin introduced Contest Director Joni Labaqui who invited the illustrators to introduce themselves. Our youngest winner this year was 17 and the oldest was 73—with diverse experience ranging from science to cover design.

Then Contest Coordinating Judge Echo Chernik congratulated the winners, and appealed to them to bring any question to the staff and the judges. This is a chance for them to get answers; but more important, it’s a chance for them to make connections with other illustrators who will support and encourage them throughout their careers.

In addition to Echo Chernik, the Illustrators of the Future Contest Workshop will be taught by bestselling artists including Craig Elliott, Larry Elmore, Bob Eggleton, Bea Jackson, Tom Wood, and Michael Talbot.