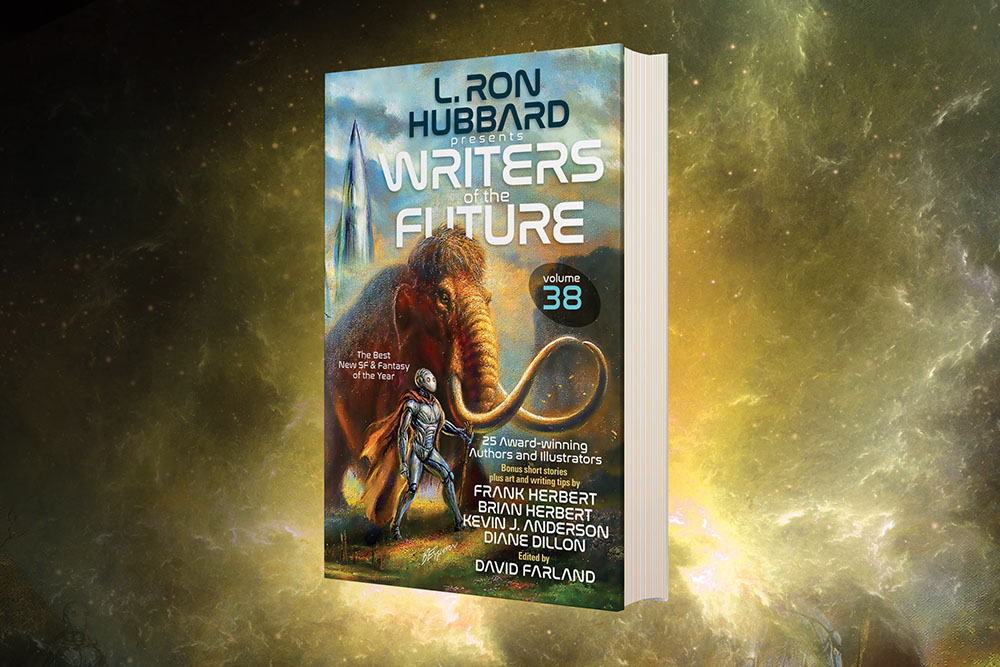 The L. Ron Hubbard Achievement Awards will celebrate its 38th anniversary of the internationally-acclaimed Writers and Illustrators of the Future Contests in a private event at the Taglyan Complex in Hollywood on April 8, 2022. The event is being broadcast live from www.writersofthefuture.com beginning at 7:00 p.m. Pacific Standard Time so anyone can watch.

John Goodwin, President of Galaxy Press, stated, “We are very proud of the diversity these Contests now exhibit. For the first time in the Contests’ 38 years, we have winners from 10 countries: Australia, China, England, India, Iran, Jamaica, Singapore, Spain, Sweden, and the USA.”

Goodwin continued, “Our show will open with a performance by accomplished singer and songwriter Jesse L. Stevenson, who will perform the song, “Men of Reason,” originally a poem written by L. Ron Hubbard, followed by an In Memoriam Tribute to David Farland, a beloved longtime Writer Contest Judge and Book Editor who passed away suddenly earlier this year. Then we will reveal a recently uncovered video interview of the legendary Fantasy Artist, the late Frank Frazetta. Our Keynote Speaker will be John F. “J.T.” Thompson, recently retired U.S. Air Force Lieutenant General and former Commander of the U.S. Space Force’s Space and Missile Systems Center.”

The cover art, “The Mammoth Leaders,” was created by Illustrator Contest Judge and nine-time Hugo and twelve-time Chesley award-winning artist Bob Eggleton. A companion story inspired by the art was written by Writing Contest Coordinating Judge David Farland and called “A Word of Power.” Farland unexpectedly passed away shortly after completing his edit of the volume.

The anthology contains thirteen short science fiction and fantasy stories from the winners along with illustrations created by the winning artists with three stories from seasoned professionals:

In a world where monster killing and trapping is big business, one girl from a Hunter family decides she won’t kill monsters. As a  matter of fact, her best friend is one. . . .
—“Agatha’s Monster” by Azure Arther

A “book wizard” wants to help a pair of young orphaned brothers repair their relationship. But a powerful new magic book with problematic spellwork stands in the way.
—“The Magic Book of Accidental City Destruction: A Book Wizard’s Guide” by Z. T. Bright

The daughter of Neptune Station’s greatest hero is about to face her most daunting mission yet: elementary school on Earth.
—“The Squid Is My Brother” by Mike Jack Stoumbos

A bartender with a vendetta against the future must determine if his customer is a time-traveling tourist.
—“Gallows” by Desmond Astaire

A disgraced Lark is forced to take the job nobody wants. His songs can sway minds, but there’s no margin for mistakes in the frozen north.
—“Lilt of a Lark” by Michael Panter

When a lieutenant with a mysterious past discovers an exotic creature held captive by a traveling farrago, they must decide how far they will go to save what matters most. . . .
—“The Mystical Farrago” by N. V. Haskell

Alone but for her grandchild and a fox spirit, Emily braves Russia’s winter and Napoleon’s army to keep her family alive and together.
—“Tsuu, Tsuu, Kasva Suuremasse” by Rebecca E. Treasure

An abused boy finds an alien artifact that gives him the strength to reshape his life and stand up to his violent step-father.
—“The Daddy Box” by Frank Herbert

A son must decide whether to follow his father’s footsteps and accept a responsibility he doesn’t understand.
—“The Island on the Lake” by John Coming

When a desperate bid to recover stolen memories goes wrong, Alice must decide how far she’s willing to go to protect her best friend.
—“The Phantom Carnival” by M. Elizabeth Ticknor

A botanist must cure a dying planet before an evacuation when she will be forced to leave her young daughter behind.
—“The Last Dying Season” by Brittany Rainsdon

When Fava, a Neanderthal shaman, discovers the men of metal driving away her mammoths, she must find magic powerful enough to save the herd.
—“A Word of Power” by David Farland

Technology suppresses crime on the generation ship Eudoxus until a body is discovered, threatening the years of peace.
—“The Greater Good” by Em Dupre

A genetically engineered assassin, concubine, and bodyguard has to unravel the entirety of her being to save her son. . . .
—“For the Federation” by J. A. Becker

Tyson doesn’t need to be psychic to know the invitation is a trap, but he can’t refuse a poker tournament with the highest stakes imaginable.
— “Psychic Poker” by Lazarus Black

L. Ron Hubbard initiated the Writers of the Future Writing Contest in 1983 to provide “a means for new and budding writers to have a chance for their creative efforts to be seen and acknowledged.” Based on its success, its sister contest, Illustrators of the Future, was created five years later to provide that same opportunity for the aspiring artist.

The intensive mentoring process has proven very successful. The over 500 past winners and published finalists of the Writing Contest have published over 1,900 novels and nearly 6,200 short stories. In addition, they have produced 36 New York Times bestsellers, and their works have sold over 60 million copies.

The 370 past winners of the Illustrating Contest have produced over 6,200 illustrations, 390 comic books, graced 624 books and albums with their art, and visually contributed to 68 T.V. shows and 40 major movies.

For more information on the writing contest and illustration contest and to see the annual awards gala, go to www.writersofthefuture.com.

L. Ron Hubbard Honored as One of America’s Most Acclaimed Authors of the 20th...