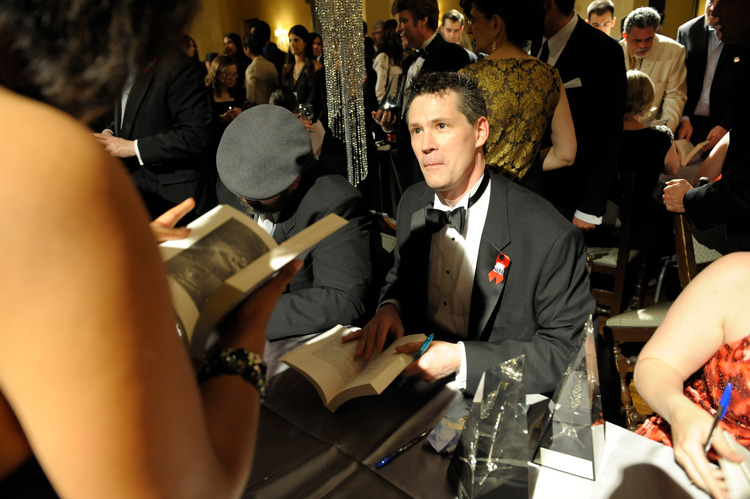 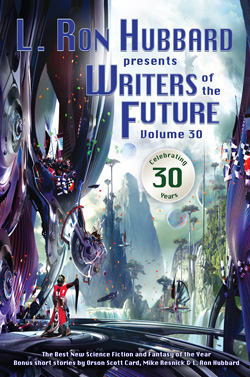 Hands down, the best and most useful part of winning the Writers of the Future contest and being published in L. Ron Hubbard Presents Writers of the Future Volume 30 was the people. I’ve often compared it to reaching the end of the Yellow Brick Road and instead of yelling, “Ignore the man behind the curtain,” the wizard reaches out a hand and says, “Here, let me help you.” The workshop to which winners are treated is full of wizards, from childhood heroes of literature and art to instructors and invited guests who all give generously of their time and experience to help the next generation and the genre.

One such wizard is Kevin J. Anderson, who when time allows, gives what he calls “the popcorn speech.” It’s nothing revolutionary—just the idea that success comes from consistent effort, not a single shining moment of razor-honed brilliance. You can make yourself crazy trying to pop that one perfect kernel or you can relax and make some popcorn, leaving the duds in the bottom of the bag. Writing, he says, is like that: put enough work out there, and if you’ve any talent at all, something will stick.

The Nuclear Reactor Theory of Success

There is a closely-related idea that I call the Nuclear Reactor Theory of Success. This isn’t revolutionary either. It starts with networking 101: you meet someone and they introduce you to someone and so on. Eventually, the growing chain of introductions leads to an opportunity, and that leads to a slew of new introductions and the cycle repeats. Pretty soon you have a burgeoning network of contacts and opportunities, compounding like neutrons in a nuclear chain reaction.

And that’s where the magic happens. As the popcorn flies and your chain reaction grows, it starts to radiate its own luck.

Yeah……..no. It doesn’t work that way. In fact with rare exception, it has never worked that way, not even for Tolstoy or Rolling.

This mentality ignores the cold reality that writing is a business, and businesses take time and capital to develop their brand, whatever else they may get right. It’s a myth and a prescription for misery to count on one unlikely shortcut to bypass that reality. Those who believe it are apt to hold back, waiting for the big break or big win that may never come. Or they may labor forever, polishing the life out of their One Great Creation instead of getting their work and their name out into the world, soliciting feedback, and growing as artists and people. And then when a break does finally come their way, they are likely to hang on it, Madam Bovary style, instead of sticking the feather in their cap and moving on, taking the next (sometimes frightening) step down their personal road. Worse, when the untrod path grows moss, they may grow cynical, blaming “gatekeepers” for their lack of professional attainment while driving away the very people and institutions who might have helped them.

When I won Writers of the Future, I knew exactly one writer (me) and I had maybe a dozen posts on my nascent blog, so I decided to interview my fellow winners—mostly just to scare up some content. Since then it’s become a tradition, and I’ve made friends and contacts in each subsequent WotF class. During the workshop, I camped out at the bar, listening to Mike Resnick and Eric Flint triple and quintuple my knowledge by the minute, sharing their advice and a career’s worth of hard knocks.

Mike gave me hell for not belonging to my local writers′ guild, so when I got home, I joined. That led to a bunch of appearance opportunities—but more importantly, to friendships that have paid unexpected dividends—from sharing the costs at local cons to getting a hug from “The Trouble with Tribbles” author, David Gerrold. It also led to my first gig as editor, helping with a locally-produced anthology.

With my fellow WotF winners and local guilders, I now had a posse to run with at conventions, so I could leave my inner wallflower at home and hang with the cool kids. But more than that, I had colleagues—colleagues who share tips and opportunities, make introductions, collaborate, critique each other’s work, and prod each other onward and upward.

That’s how I heard the popcorn speech—another WotF alum and I found Kevin in the hotel bar at WorldCon and he and Todd McCaffrey strong-armed—I mean persuaded me—to attend his Superstars workshop. I heard Kevin′s talk there, but I also met a whole new group of colleagues. This included the impressively mohawked Quincy J. Allen, who introduced me to a publishing tool that I now use to produce custom signed ebooks. Those help entice new subscribers onto my newsletter mailing list and let me give readers I may never get a chance to meet in person just a little something extra.

This is also how I learned about Taos Toolbox, a writing workshop taught by Walter Jon Williams and another WotF wizard, Nancy Kress. Since my WotF win, I′ve continued to hone my craft and was looking for a quality workshop to help up my novel-writing game. At Taos, I met a family of prairie dogs, George R.R. Martin, and Avatar scriptwriter, Steven Gould. I also made friends with a whole new group of awesome up and comers to share and grow together with.

Another writer friend told me about the Jim Baen Memorial Award—a competition focused on near future space sci-fi and tailor-made for my literary tastes. My first entry made the finals. Then it sold to Analog Science Fiction & Fact—a dream of mine since I was eight! I went on to final twice more before placing, and now I’m going to the International Space Development Conference to be honored alongside Amazon and Blue Origin founder, Jeff Bezos! More important, I’ll meet a whole new group of contacts—aerospace geeks, engineers, entrepreneurs and space exploration advocates. Who knows where that might lead? 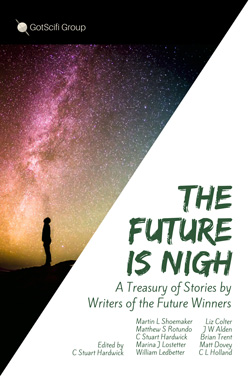 Last year, I hit up a few of my WotF friends to put together an anthology; nothing big, just an ebook for cross promotion and lead generation for our respective newsletters. It was a smash success—so much so we decided to take it to the next level. By the time you read this, “The Future is Nigh—A Treasury of Short Fiction by Award-Winning Authors” will be available in print and on Kindle.

So here I am, four years on, an Analog regular, a multi-award winning author, and now a publisher! My stories have gotten Hugo and Nebula buzz. I just found out I took first place in the annual Analab reader poll for my story, “For All Mankind” about two women who save the world in an Apollo-era spacecraft! I’ve gotten a back-stage tour of the Kansas Cosmosphere with a group of writer friends, been invited inside the Orion space capsule, and received an email from Spider Robinson saying “Go Cat, Go!”

What’s next? I’m working on a novel…and a few other things… We’ll see.

None of this might have happened without the Writers of the Future win, but none of it happened because of that win. It happened because I viewed the win not as a finish line but as a rung up life’s ladder. Because together with allies made at the WotF workshop and since, I keep climbing those rungs wherever they lead. Of course, I’m no networking mercenary and you shouldn′t be either. These are wonderful people, and knowing them is its own reward. But if my Reactor Theory can nudge you beyond the introversion so common among writers, then put the spurs to ′er. 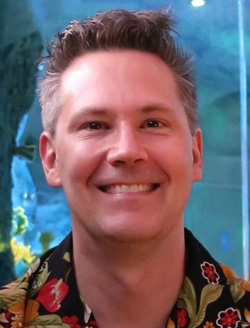 In addition to winning the Writers of the Future contest, C Stuart Hardwick is a Jim Baen Award winner, a James White Semifinalist, and an Analog Analab Reader Poll winner. His work has appeared in Analog, Galaxy’s Edge, Andromeda Spaceways Inflight Magazine, Forbes.com and Mental Floss, among others. A southerner from South Dakota, he grew up writing radio plays and has been known to wear a cape.

A Little Light in a World of Darkness

Humanity vs. Monstrosity
Scroll to top