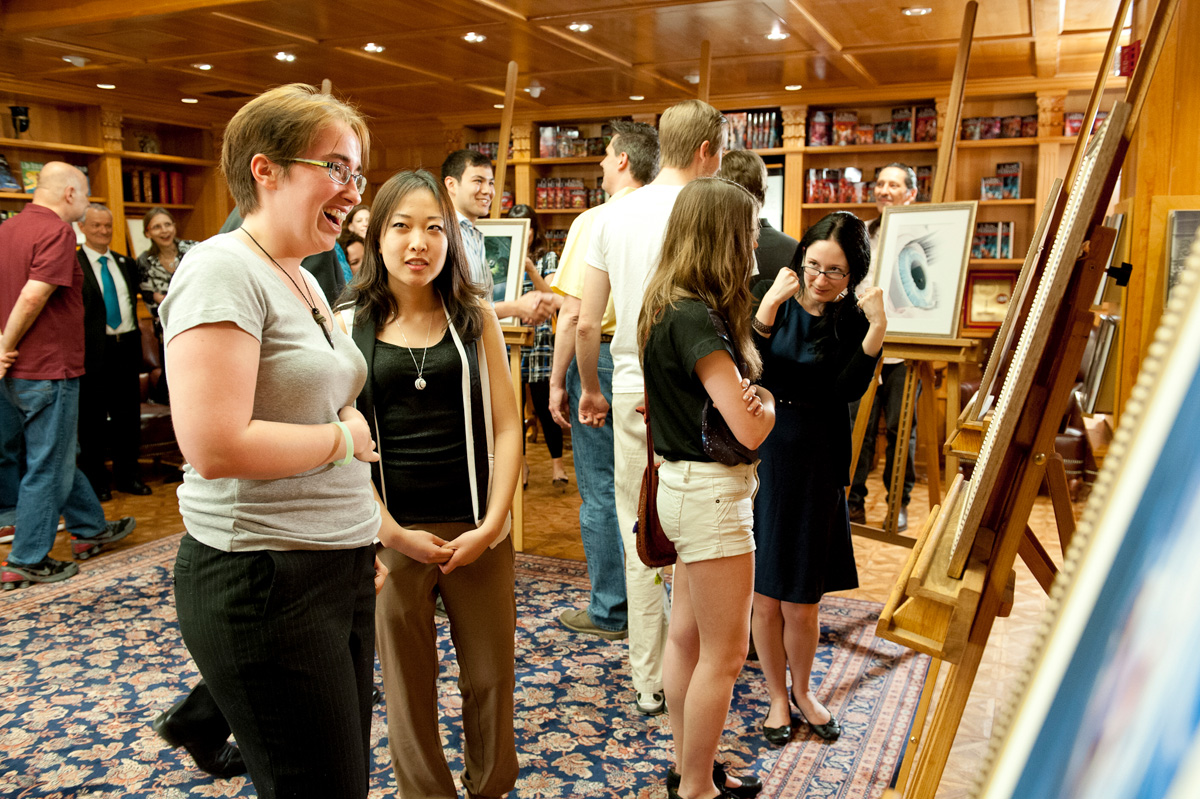 The second day of the 24-hour short story challenge saw the writer winners mostly holed up at the Loews hotel. Some of them were working feverishly to finish what they’d started the night before, others worked at a leisurely pace to polish prose which had been begun much earlier in the morning. There was no length specification. Merely the requirement that each story be whole and complete, ready to be turned in to judges and workshop instructors Tim Powers and Dave Wolverton at the end of the afternoon.

Come 4:00 PM, the writers regrouped at Author Services where they triumphantly reentered the room with their completed stories in hand. Both Tim Powers and Dave Wolverton ceremoniously collected all of the manuscripts from the participating writers and figuratively hurled them down a flight of stairs, to determine which three among the manuscripts would be selected for eventual round-robin critique by judges and winners alike during the following workshop day. Meanwhile, the authors were shuffled out of the 4th floor library while ASI staff brought in and set up easels for displaying the full-color prints of the illustration artwork done for each of the 13 stories contained in the L. Ron Hubbard Presents Writers and Illustrators of the Future Volume 30, after which the writer winners were invited back in to guess which illustration (and its accompanying illustrator) fit with each story. Emotions and excitement were high as both writers and artists spent the next hour reviewing the artwork, discussing which concepts and themes in which stories had inspired which elements in each artistic piece, and generally reveling in the moment (see the overview below in the illustrator section.)

Following the big reveal, the artist winners departed for “Salon Night” (see below) while the writer winners went to eat dinner, and thereupon returned to ASI to receive one final block of instruction from visiting guest lecturers and long-time judges Kevin J. Anderson and his wife Rebecca Moesta. Both of whom have been fixtures at the Contest for the majority of its history, and who give an in-depth presentation they colloquially term “How to be a professional writer.” Both the presentation and question-and-answer period went to almost 9:00 PM, at which time the whole of the group adjourned to the lobby of the Loews where Kevin and Rebecca met with many of the new winners to continue talking both business and craft well into the later evening.

Day 4 for the illustrators:

With Starbucks and donuts in-hand and completed assignments tucked under-arm, the illustrator winners wound their way over to Author Services, Inc. at 9:00 AM. A movie premiere had Hollywood Boulevard blocked off for several streets, so Joni took the winners on a “back secret route” to the Author Services, Inc. building. (This is typical Hollywood Blvd., where movie premieres are an almost weekly occurrence.)

Even with the illustrator winners having worked elbow-to-elbow in the Loews lobby the night prior–exchanging ideas, sharing work, brainstorming, and engaging in jovial sparring matches, like what occurred between Bernardo Mota and Andrew Sonea over which of their master artist influences informs their illustrations better–everyone came up with completely different concepts for the L. Ron Hubbard cover art homework.

Which was the idea. Judges Ron and Val Lindahn, Stephen Hickman, and Cliff Nielsen weighed in on each of the winners’ thumbnail sketches. They stressed that everyone has their own unique vision. It’s all about getting the concept down, first.

Next, the winners whipped out their portfolios.

“It’s not personal; it’s business,” Ron told the group as they spread out their illustrations. “Art directors have to solve the problem; you are the solution.” 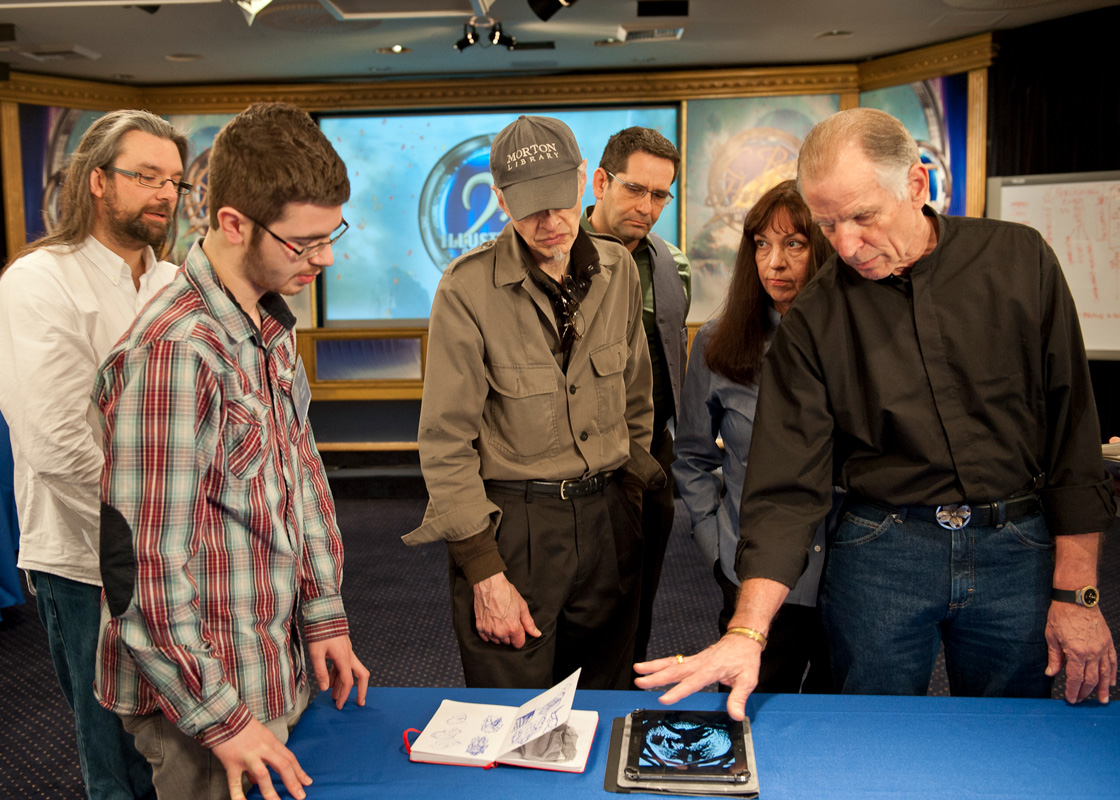 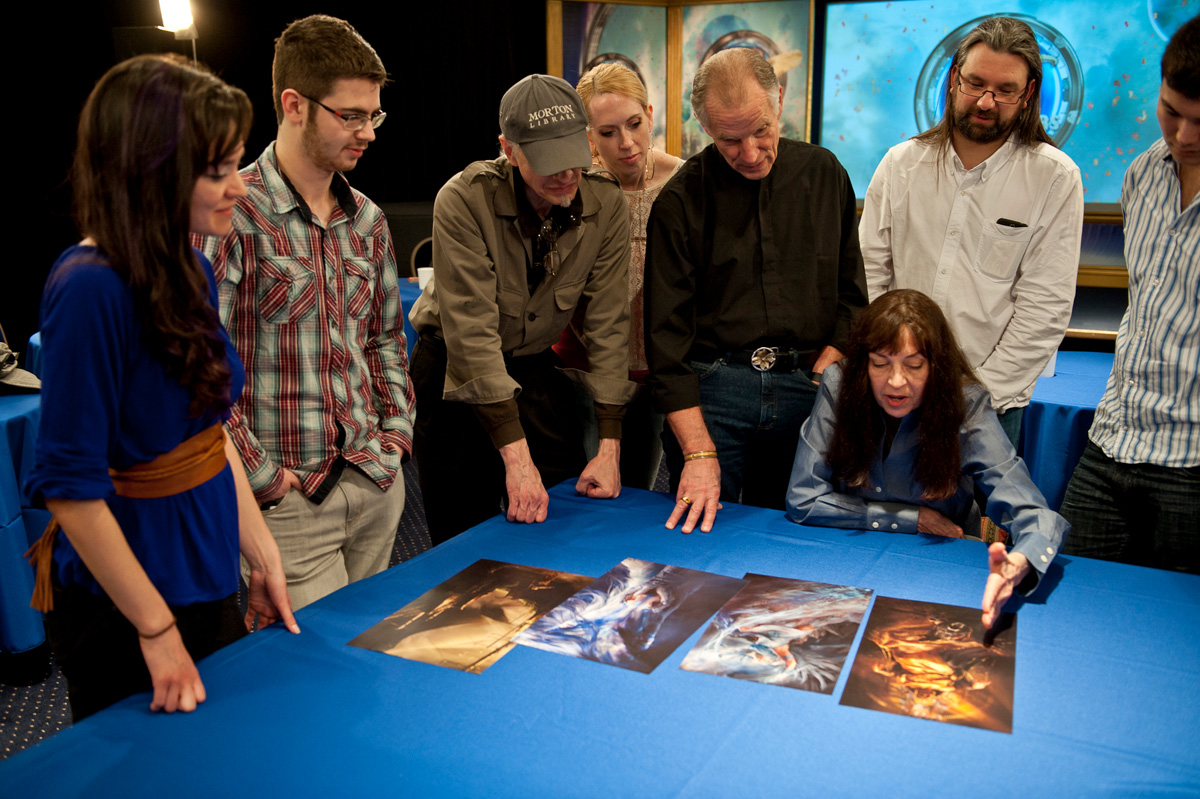 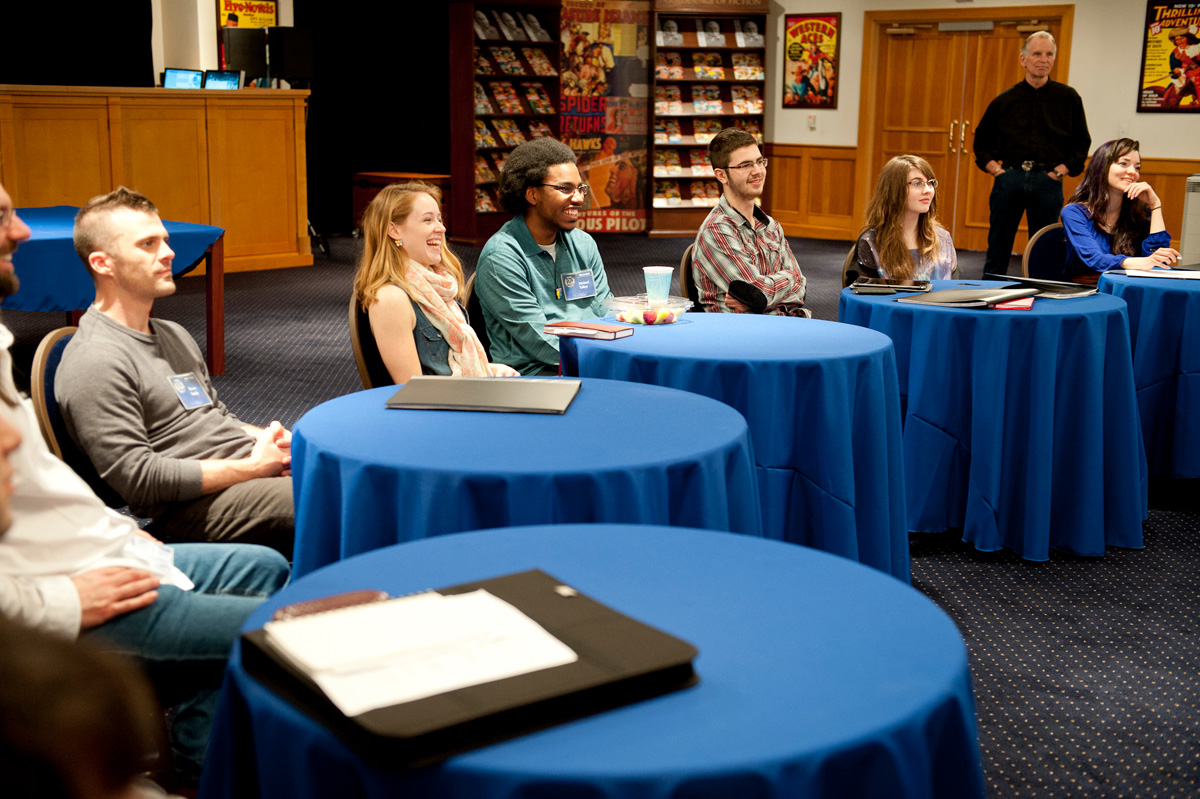 Every year the winners’ art is amazing. With ever-changing media, there were differences between the portfolio presentations themselves, too. For instance, Bernardo Mota presented his digital portfolio, whereas Cassy Bolan brought her traditional prints. Some, like Sarah Webb, had both, and after reviewing her whimsical Young Adult illustrations, Val exclaimed, “Why aren’t you out there selling already, lady!?”

During the portfolio review, the winners received another surprise. Former Illustrator winner Kenneth Scott popped by to say “hello.” Kenneth is a living success story; a huge inspiration for new and former winners alike. Kenneth was the senior art director for 4 years at 343 Industries, working on video game titles such as Halo 4. He is also the art director for Doom 3 at Id Software.

After lunch, guest speaker Jim Meskimen bugle-called the illustrator workshop to attention. Jim is an accomplished actor, improviser, voice artist, celebrity impressionist–and, yes, a professional artist, who designed dozens of characters, weapons, and vehicles for the original Thundercats cartoon series. Jim has even provided voices for a number of characters on the new Thundercats 2011 TV series, including Ponzi and Aburn. Jim spoke about fundamentals (in voices), communication through art, and what makes a professional.

The late afternoon saw tuxedo fittings for the men on the 4th floor of Author Services. 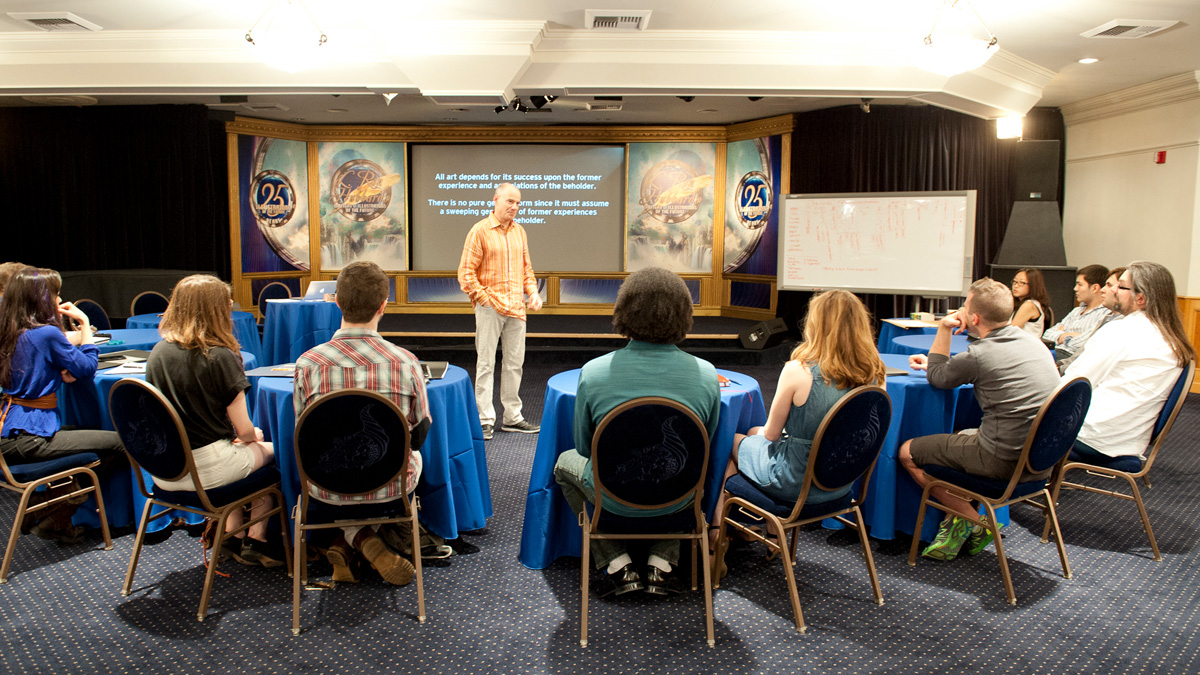 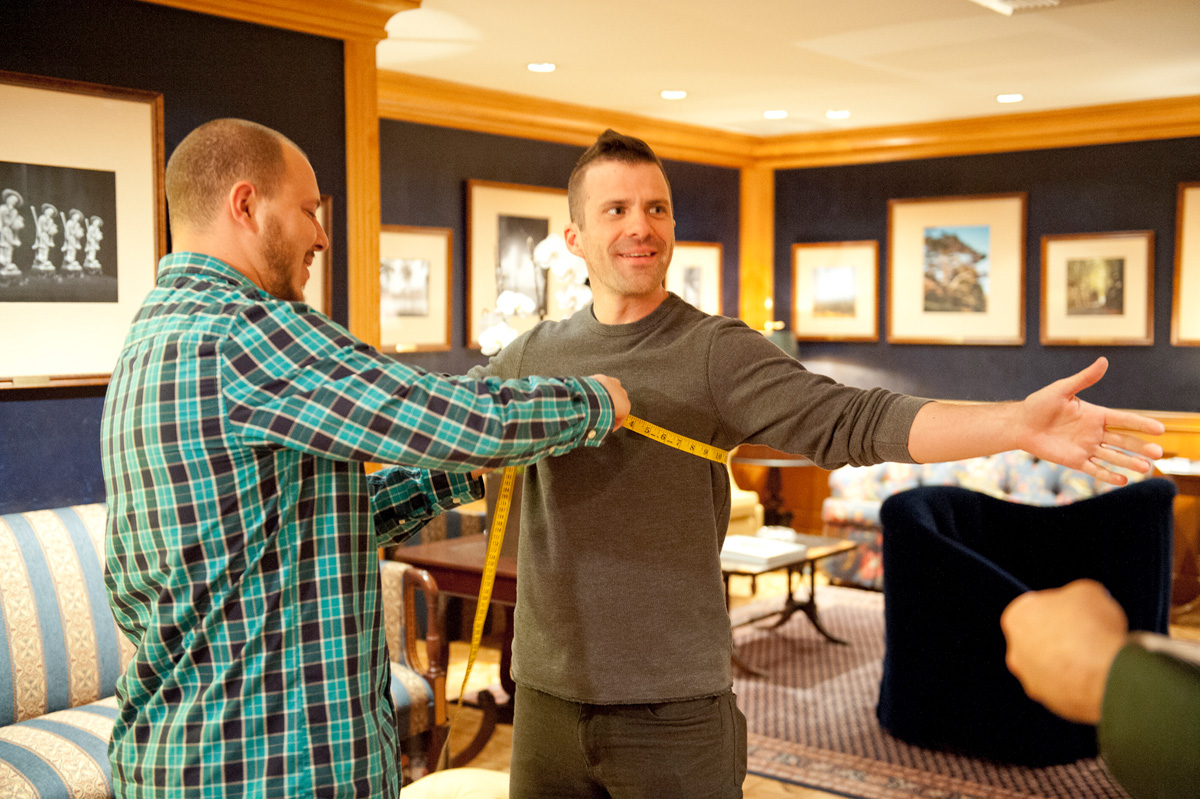 And then the moment of truth: Inside the Hubbard Library, the illustrators gathered around the illustrations they did for each story in the L. Ron Hubbard Presents Writers of the Future Vol. 30 anthology, in preparation for “the big reveal.” This is one of the signature moments of the Contest. Without ever having seen the illustrations, and not having being told which artist was assigned to illustrate which story, the writers were ushered in to witness the full-color pieces arrayed on easels around the room. For some, it took a bit of examination. For others, it was instant recognition. But to see their stories rendered in illustration, it’s almost invariably an emotional moment for writer and artist alike. 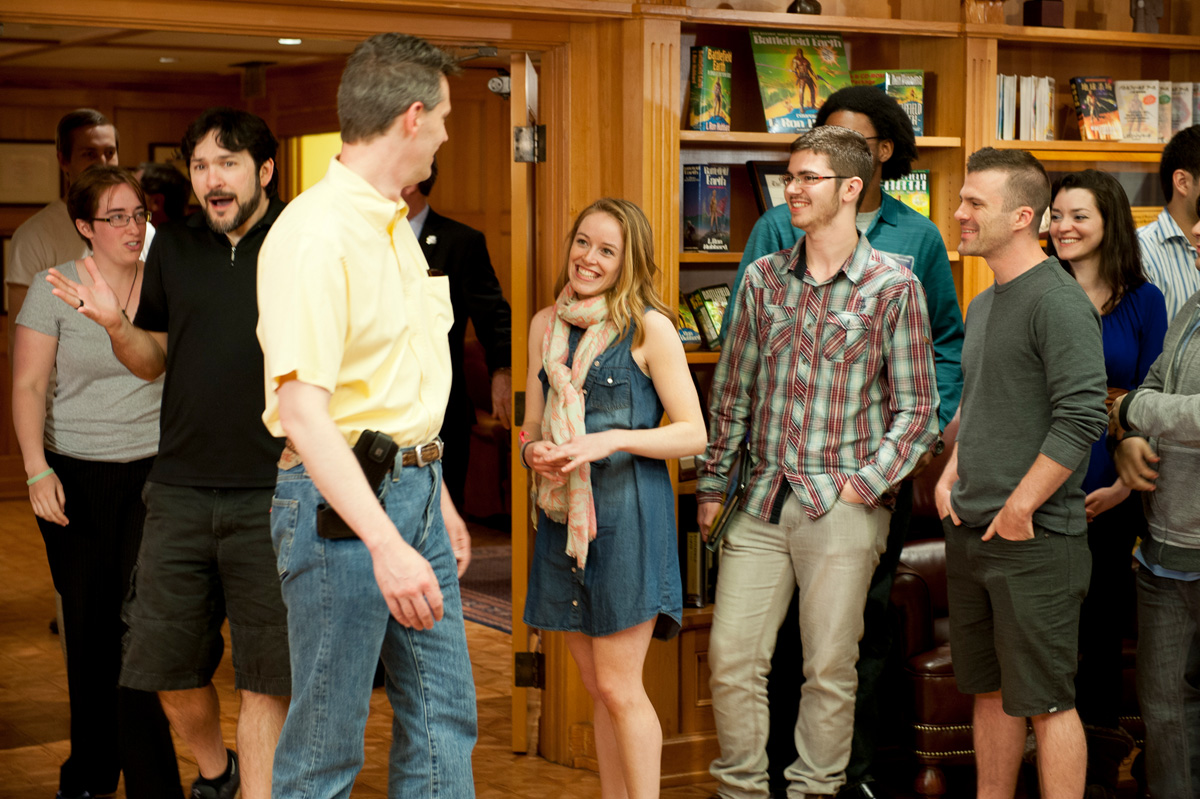 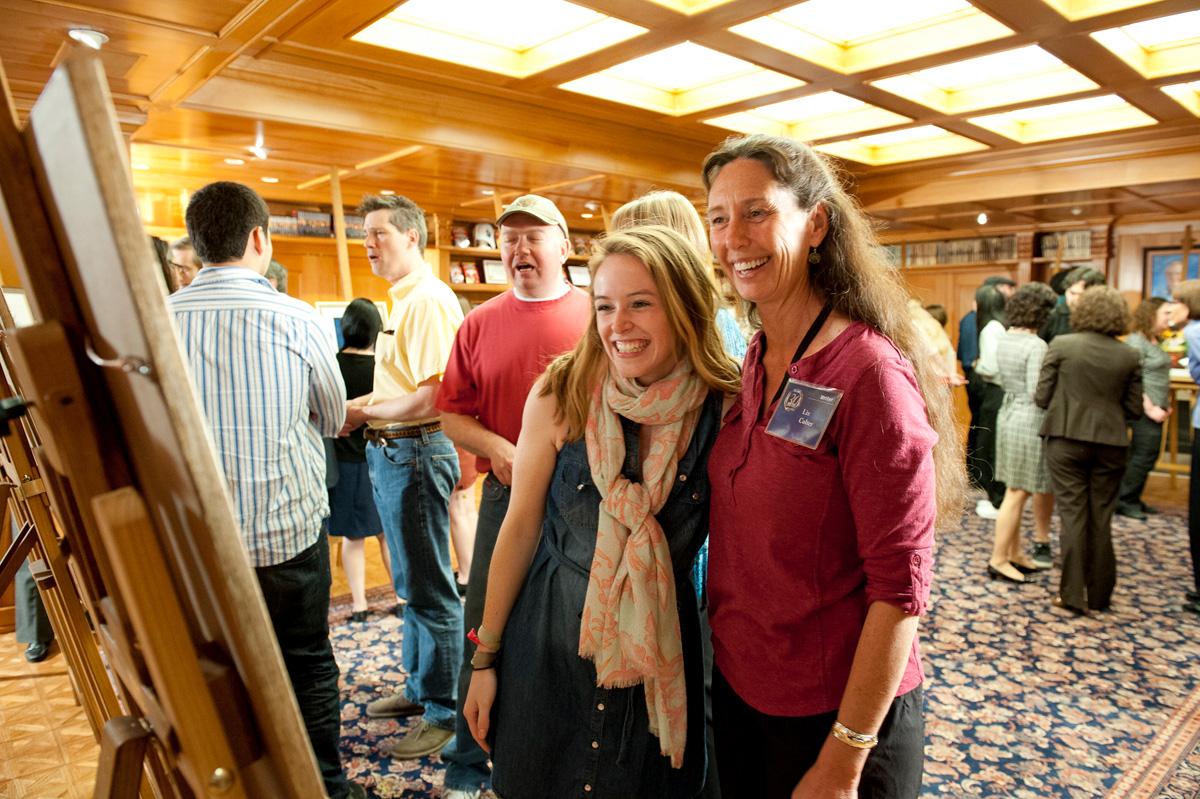 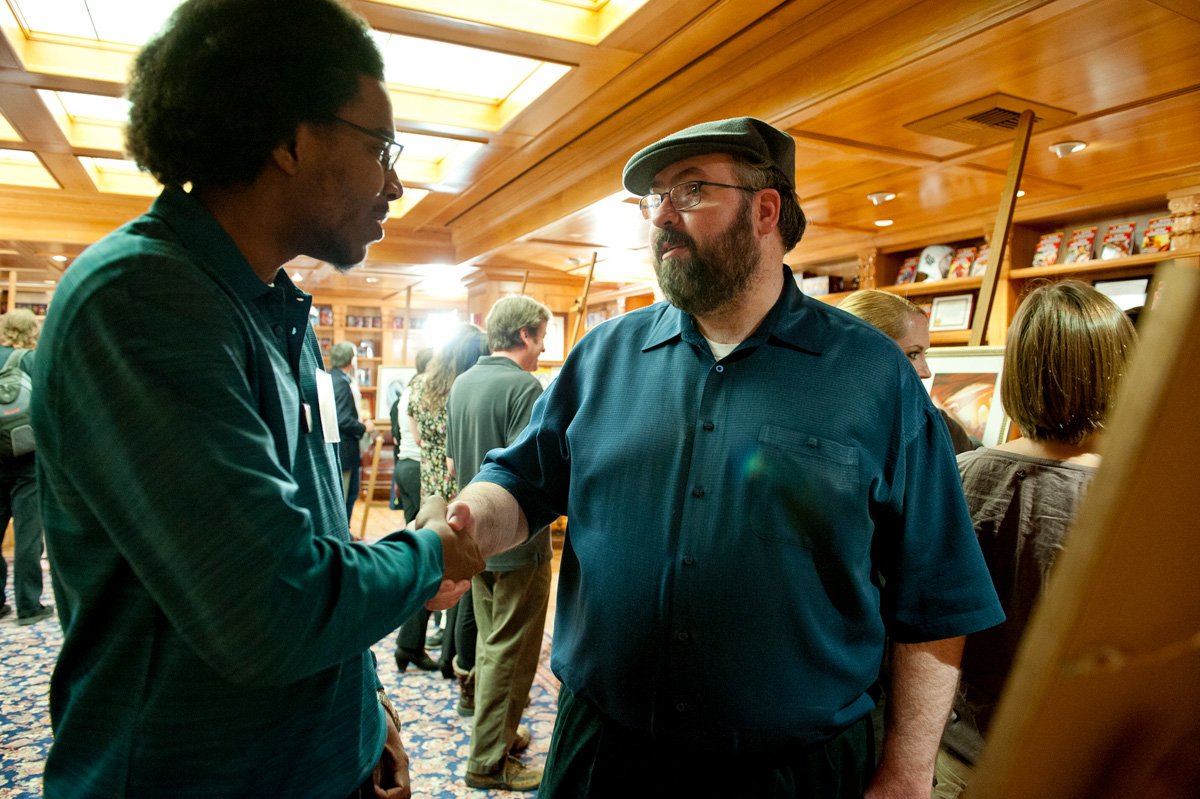 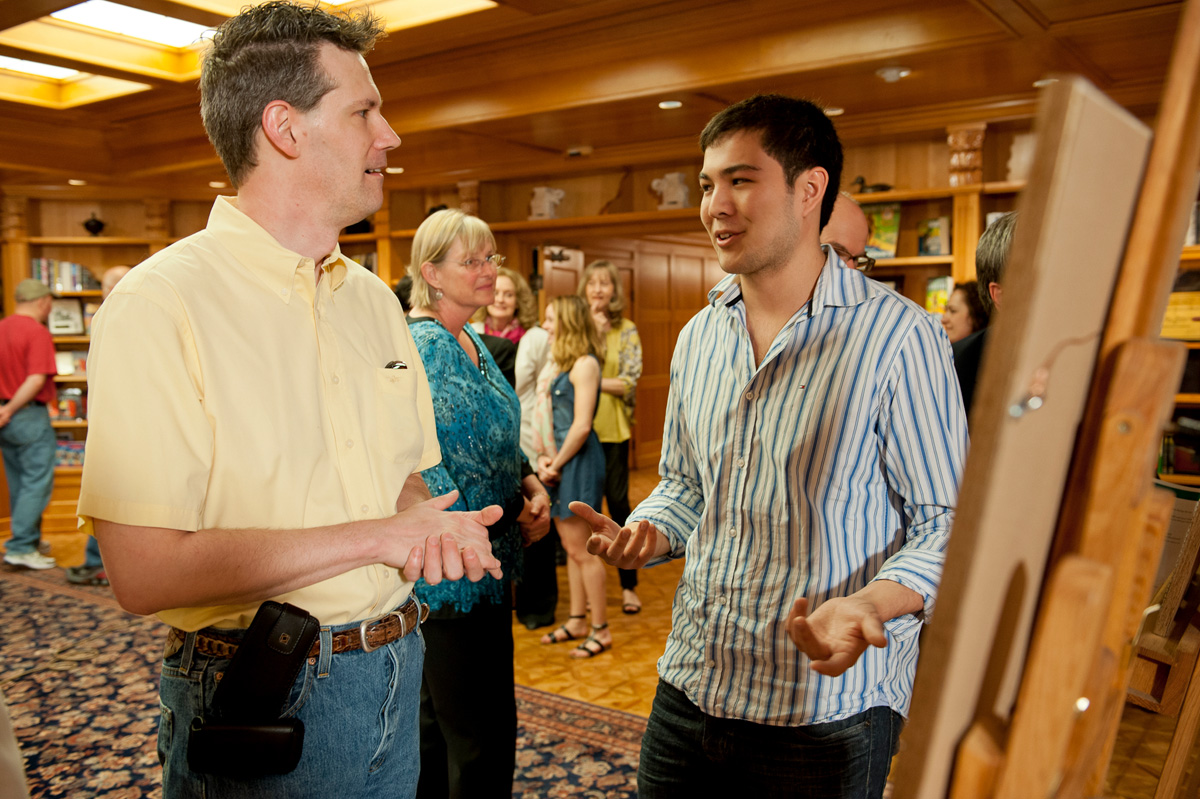 Given the excitement of the reveal, dinner got bumped up, so the illustrators were almost late getting into the vans which chauffeured them across town to Illustrator Coordinating judge Cliff Neilsen’s house for what is termed “Salon Night.” Cliff’s home is a former brewery that began life as a plant run by Edison Electric. Inside, one can find thirty-foot ceilings, spiral staircases, subway lockers along one wall, a ramp leading to the kitchen area, and underground tunnels that no one has fully mapped.

On a stage Cliff built in his studio, three live models posed in costume, with props. This year, the theme was Steam Punk. The models did ten-minute poses. Judge Stephen Hickman sketched the same images from several different perspectives, while the illustrator winners clustered round.

Winner Adam Brewster was ecstatic to be sketching with his peers. Judge Robert Castillo and past writer/illustrator winner Meghan Muriel got in on the action, too, doing collaborative sketch-doodles. Meanwhile they all sampled dishes from a food spread catered by the Nielsens.

The illustrator winners eventually arrived back at the hotel at 10:30 PM, sleepy and satisfied, though some, like Bernardo, were still sketching from memory.

Welcome to Day 3 Behind-the-Scenes of the Writers and Illustrators of the Future...

Welcome to Day 5 Behind-the-Scenes of the Writers and Illustrators of the Future...
Scroll to top