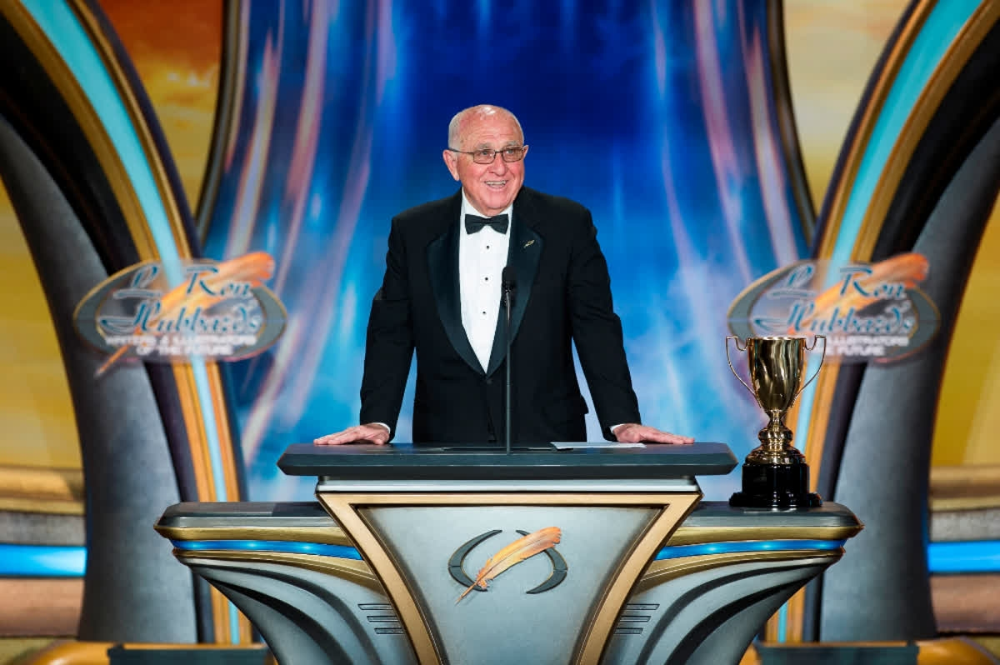 Tom Doherty, president and publisher of Tor Books, was announced as the keynote speaker for the L. Ron Hubbard 36th Annual Achievement Awards and the release of Writers of the Future Volume 36 taking place Friday, April 3, at the Taglyan Complex in Hollywood, by John Goodwin, president Galaxy Press, publisher of the anthology series.

Few casual readers may know of Tor Books, but almost anyone who has ever read a science fiction or fantasy book will have held one of Tor’s innumerable novels, which have been published since its inception in 1980. It was Tom Doherty who founded Tor Books which has become one of the most impressive powerhouses of speculative fiction in the modern world.

Doherty has deep roots when it comes to books, having been a book salesman through the 1950s and 60s until he became the publisher at Tempo Books in 1972. A few years later, he also joined Grosset & Dunlap as the publisher of their science fiction imprint, Ace Books. After all that time in the trenches of the publishing industry, Tom launched out on his own to create Tor Books and realize his vision for science fiction and fantasy stories that would go on to inspire countless millions.

He is both president and publisher of Tom Doherty Associates, LLC, which is associated with the Tor, Forge, Orb, Starscape, and Tor Teen imprints. His dedication to the industry has certainly shone through with the quality of the tales these imprints tell and the amazing authors they bring to the world.

Doherty has been long lauded for his contributions to publishing and speculative fiction. In 2005, he received the Lifetime Achievement World Fantasy Award at the World Fantasy Convention. In 2015, while attending the Writers of the Future award ceremony he was presented the L. Ron Hubbard Lifetime Achievement Award for Outstanding Contributions to the Arts, where he stated, “Thank you again to the Writers of the Future and its late founder, L. Ron Hubbard for having the vision and the foresight to make dreams come true. Together we build new tomorrows.”

Writers of the Future is a contest initiated by L. Ron Hubbard in 1984 as a means of providing a helping hand to aspiring writers on how to become an author. Due to the immense success of the writing contest, a sister competition, Illustrators of the Future, was created.

The annual Contests draw entrants from around the globe and are free to enter. Winners retain full rights to their work and each is given cash awards. Grand prize winners receive an additional $5,000. The Contest flies out all winners to Los Angeles for an expense-paid, week-long workshop of writing tips and how-to advice given by Contest judges and culminates in a black-tie gala awards event.

Illustrators of the Future Contests Boast Winners from Turkey and Iran