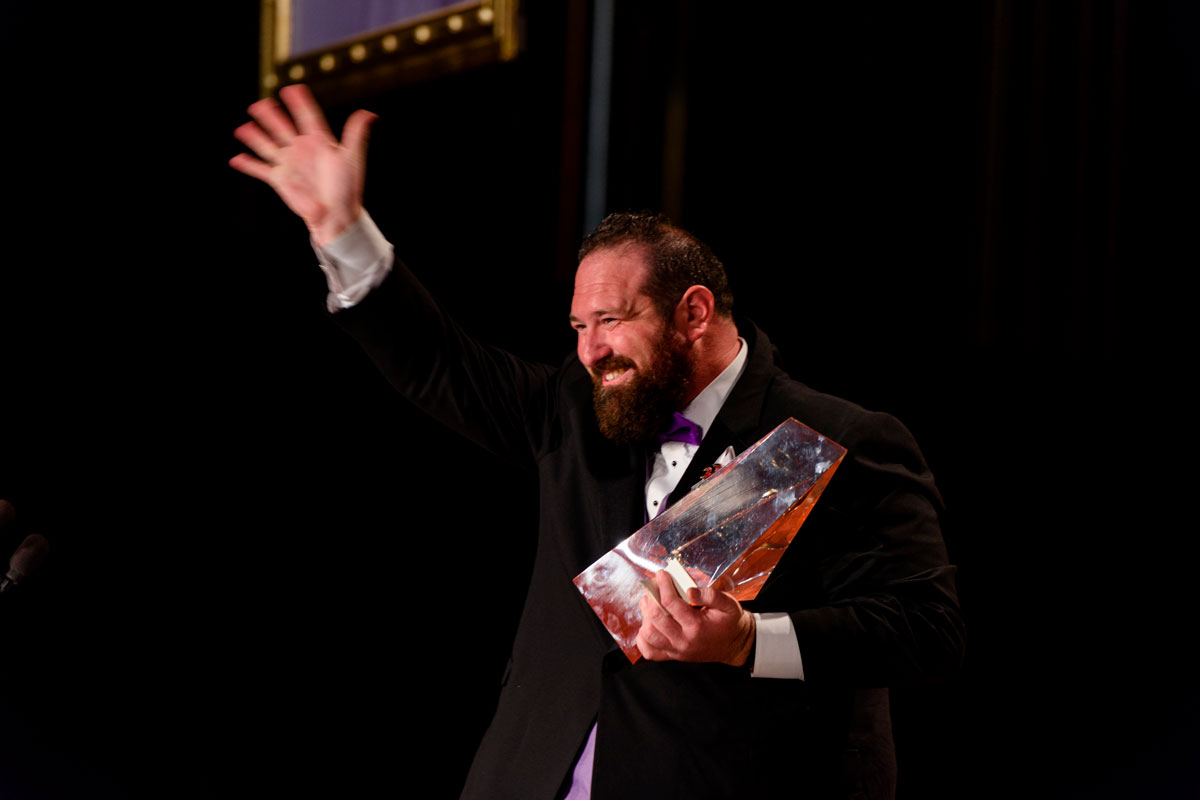 I can admit that when I first heard about the Writers and Illustrators of the Future contest, I was skeptical. On the surface it seemed too good to be true. It’s a free contest, open to international authors who are still looking to break into the industry. There’s prize money, there’s the promise of publication in an annual anthology, and there’s the absolutely surreal experience of a trip to Hollywood where you can participate in a weeklong writer workshop with bestselling authors, stay in a swanky hotel, and celebrate your win in a black-tie awards ceremony where you’ll stand up in front of an audience of people who are only there to support new authors and illustrators and give a speech, usually thanking your spouse, your writer friends, and maybe all of the darlings you had to kill to get where you are.

Yeah—surreal is absolutely the right word.

Skepticism aside, the more I researched the contest, the more legit it seemed to be. I read widely inside and outside the horror genre, so I recognized a surprising number of names who were mentioned in the same context as the contest. The judges are bestsellers, and many of the winners used their publication with Writers of the Future to springboard into careers in publishing. There was a sense of community among the participants. A camaraderie that was as attractive as the elusive publishing credit that I was seeking at the time.

I decided to enter. The contest is for fantasy and science fiction–which I saw as strangely limiting in my first attempts–but I only needed to read one of the latest volumes of the anthology to see how broad a category that covered. Steampunk, dark fantasy, hard sci-fi, sword and sorcery–there was something for everyone, and all of the stories were by new authors, just getting their first break.

I tried a little of this, a little of that. The contest is quarterly, so there are first-, second-, and third-place winners four times a year. Plenty of opportunities for experimentation. What kind of story did I want to tell? How could I make it better? The twelve winners are published together, usually with another finalist or two, and their stories make up the bulk of the anthology.

Last year, I became a Patreon supporter to the This Is Horror Podcast so I could ask questions of authors I admired and Michael would pass it along in the interview. When he says, ‘We’ve got a question from Jake Marley,’ he’s talking about me. I wanted to learn as much as possible from as many sources because I wanted to make my writing stronger.

I wanted to win Writers of the Future.

I submitted for years, but when you keep writing, you keep getting better. I stopped writing stories to try to win the contest, and wrote a story just for myself. Quite a few guests on This Is Horror talked about writing for themselves, or writing stories they wished were already out in the world. I thought about it, about what I’d love to read that isn’t out there, and I gave it a whirl.

My ghost story, ‘Acquisition’, took first place in the 3rd quarter of the contest. I received the prize money just before Christmas 2016, and signed the publishing contract soon after. I was going to be a published author!

The money was good. Promise of publication was better. I had no idea how enriching and inspiring the workshop would be, though, and honestly, after everything, it still seems like the grand prize the contest has to offer. 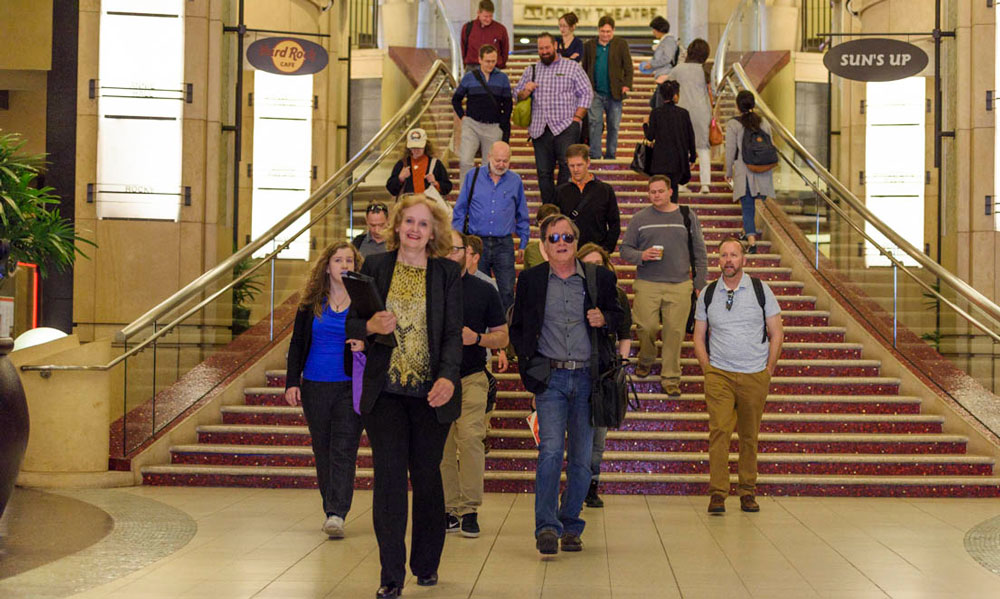 Writer winners and instructors walking to the workshop.

I went to Hollywood for the weeklong workshop. The other winners were flown in from around the world, but I drove because I only live about an hour south of there. They put us up in a hotel and after introductions that first night we became fast friends. Writers are funny–we all work quietly, alone and in our heads, so when you get a group of us together in a room we all have something in common. Something to build friendships on.

On the first day of the writer workshop one of our instructors, Tim Powers (The Anubis Gates, Medusa’s Web, Last Call) found out who I was and what story I’d written. He leaned in close and said, ‘You know, there’s a scene in that story I enjoyed so much it makes me want to steal it for one of my books.’ I was flattered. Delighted. No, those are too mild of words. Man, I was so overjoyed I don’t think I stopped grinning that whole day.

David Farland, editor of the anthology and best-selling author of the Runelords series, and Tim took a few days and shared their knowledge about writing and publishing with us. They were succinct, candid, and absolutely encouraging.

Armed with their words and instruction, they prepped us for the most notorious part of the Writers of the Future workshop: the 24-hour story. From 4 pm on Wednesday to 4 pm on Thursday we were to write a complete story. Only 24 hours for an entire short story. But you know what? We all did it.

We did interviews, took headshots, and learned from genre legends. At the end of the week, we celebrated our contest win with a black-tie awards show. You can see it on YouTube in its entirety. It’s an incredible event, and when they announced ‘Acquisition’ I went onstage and stuttered over my thank-yous to my wife and daughter. To my family. To my writer friends.

The four 1st place winners were all up for a Grand Prize, too. The Golden Pen Award. It’s the big deal prize, because it’s voted on by all of the judges that year, not just the handful that pick the quarterly prizes. And it comes with a giant award, and a $5,000 prize. The winner is announced at the very end of the ceremony as the grand finale. 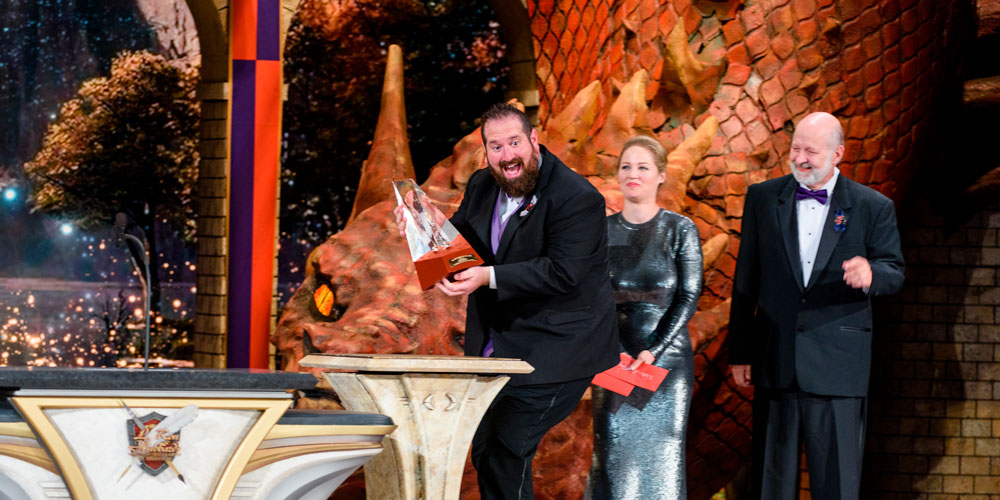 Jake Marley on stage with Erika Christensen and Dave Farland

I’m not ashamed to say that when they announced my story as the winner I kind of lost my shit. It’s a blur now, but I’ve seen the footage (remember I said it’s on YouTube? Go watch the last 11 minutes of the show. It was madness–and YouTube is forever, my friends.) I was laughing and high-fiving the other contest winners and total strangers and I started shaking hands and I hugged actress Erika Christensen who presented the award and I hugged David Farland who I’d once told, a few years before, that I was going to come back and win his contest. (He mentioned this before I got to my second thank-you speech. Again, it’s on YouTube.) My wife was crying and my daughter was crying and if I wasn’t crying then I sure was later, because I’ve been writing in secret for 20 years, and that’s a very long time to try to get good at something.

You know what else the contest taught me? I can still get better. When I came home I started applying the tools and tips all of the incredible instructors gave me. They work. I’m filled with a crazy confidence, and every day I sit down to write is a joy. Our anthology, L. Ron Hubbard presents Writers of the Future Volume 33, became a National Bestseller here in the States, and while my story hasn’t hit the mark with every reviewer, it has connected with quite a few of them.

If you’re an unpublished writer, enter the contest. If you have a credit or two and are interested, go to the Contest Rules page on their website and find out if you’re still eligible. You just might be, in which case you should really enter the contest.

Write the story only you can write. Write something you wish was out in the world, and write it as well as you can. Don’t be afraid to submit, and don’t be afraid of rejection–after all, if you miss out one quarter another one is just around the corner. Even if every story you write gets sent back, it’s okay–because very quickly you’ll have a pretty large body of work you can edit and revise and submit elsewhere! If you keep it up, selling stories as you go, you might just ‘pro out’ (too many professional sales will make you ineligible) which, honestly, would be a pretty cool thing too.

The Writers of the Future Contest has been going strong for 33 years, and any day now the 1st quarter winners for Volume 34 will be announced. There’s still plenty of time this year to submit, and to see if you can get your story in next year’s anthology.

This article by Jake Marley originally appeared on ThisIsHorror.co.uk.

What Makes a Story Great?
Scroll to top