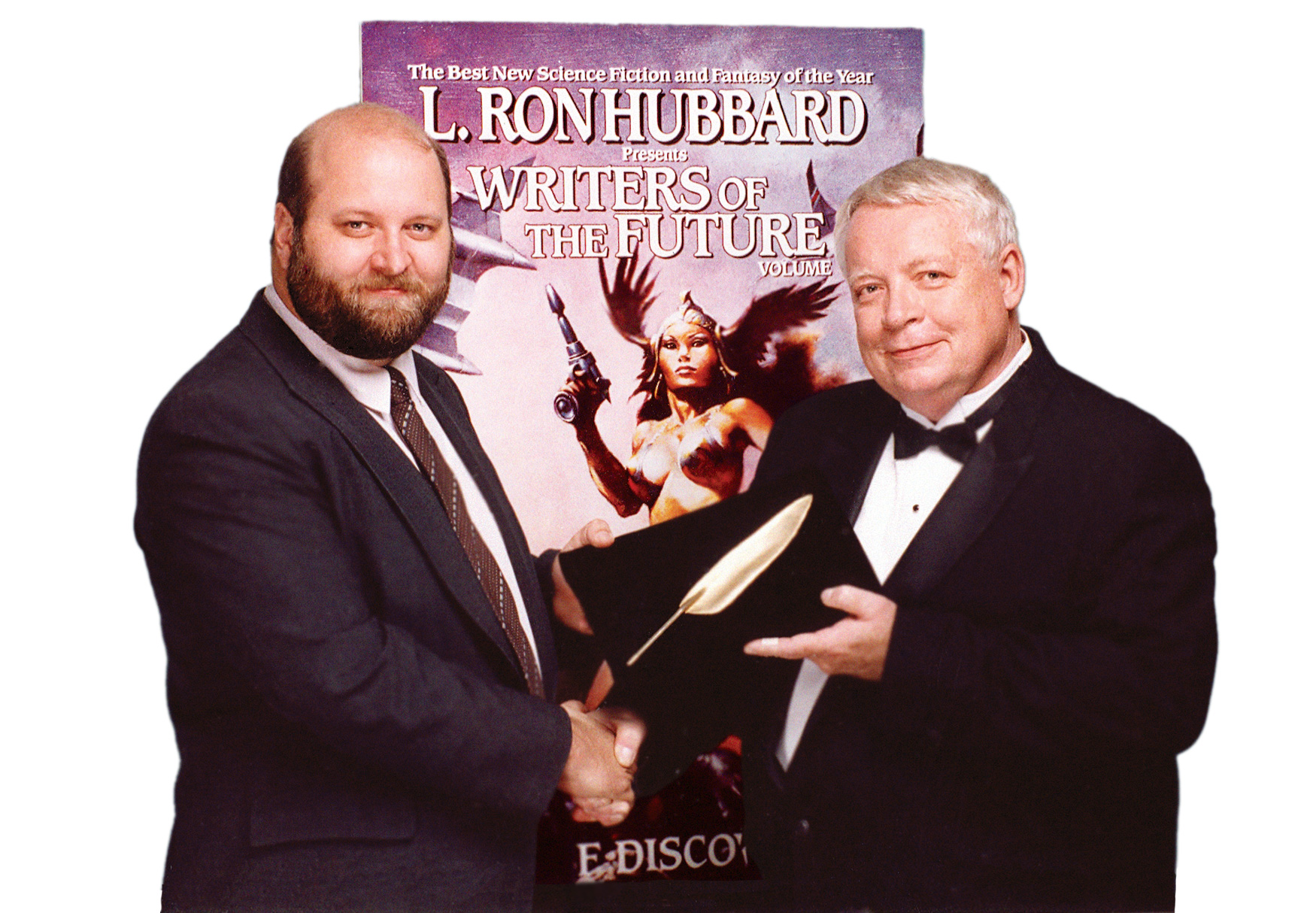 “I feel this is the most important thing I could be doing with all the things I’ve learned in my life.” —Algis Budrys

In 1983, in recognition of the difficult road to success that new writers had to face in an ever-tightening publishing environment, L. Ron Hubbard “initiated a means for new and budding writers to have a chance for their creative efforts to be seen and acknowledged.” This was the Writers of the Future Contest, endowed with significant prize money, administered and judged by giants of the field of science fiction.

This came about after surveys at several SF conventions showed that almost 25% of attending fans harbored a secret dream to become writers themselves. Hubbard had a long track record of helping young writers, having carried on lengthy personal fan mail correspondence, writing numerous how-to articles in writers’ magazines, even forming and directing small amateur writer contests earlier in his career.

Hubbard himself had dealt with many of the same obstacles when he was first learning not only how to direct his own talent as a wordsmith but to bring it to the attention of editors and publishers. He also knew that beginning writers often lacked for practical support—money, sound advice and meaningful encouragement from their predecessors in the writing trade. Such things have no effect on innate talent, but everything to do with the freedom for such talent to develop.

K.D. Wentworth, the current Coordinating Judge of WotF, wrote, “Only another writer can know how very hard it is to persuade oneself to set out on that long winding road to publication with all its back alleys and notorious dead-end streets. You not only have to convince the publishing world that your work is worthy of seeing print, you have to defeat your own self-doubt which is at least as hard, if not even harder.”

With the initial announcement, the new Contest caused quite a stir among aspiring authors. There was no entry fee. The prizes were outstanding: $1,000 for first place, $750 for second, $500 for third, and publication (not to mention separate pay—and a very high pay) in a professional and widely distributed anthology. The judges were SF luminaries with names to conjure with—Gregory Benford, Algis Budrys, C.L. Moore, Robert Silverberg, Theodore Sturgeon, Jack Williamson, Roger Zelazny, and they were joined the following year by Frank Herbert, Anne McCaffrey, Larry Niven, Frederik Pohl and Gene Wolfe.

Entries poured in by the hundreds, then the thousands.

Algis Budrys, the first Coordinating Judge of the Contest, described the process of how manuscripts are received, evaluated and distributed to the judges.

“The Contest Administration sends the entrant a notice that the entry has been received, carefully records the author’s name and address and story title, and safeguards the information in records none of the Contest judges see. Then the Administrator checks to be sure no trace of the author’s name appears on the manuscript itself, and forwards the now-anonymous work to me, the Coordinating Judge, in a plain, numbered envelope. I see all the eligible entries, each handled in the manner described. Then, every three months, on the quarterly schedule given in the rules, I select all the stories I judge to be publishable speculative fiction, and pass those on to a group of Finalist judges chosen from our panel of the world’s top-flight creators of SF in the English language.

“Each quarter, the Finalist judges select three winners. The quarterly winners are contacted as soon as the judging results come in and are tabulated. Their personal reactions are as varied as their stories and their artwork: stunned silence, disbelief, yelling, crying, laughing . . . you name it and we’ve probably heard it.

“The only criterion for winning is a good SF story, of whatever kind is published in the field or could be published to SF readers. We don’t know who the authors are, we don’t know their age, sex, race, or their circumstances in life, and we can only guess at their hopes and fears because we can assume they are the same as ours were. The readers read, and thus encourage the writers. The writers make sure there’s something new for the whole family to read. And WotF provides a specific, effective channel for getting that done.

“Without aspiration for the future, there is nothing.”

In the second year of the contest, L. Ron Hubbard instituted a $4,000 Grand Prize award for the top story among the four First Prize winners, in addition to the $1,000 they already receive for First Prize. Thus, each year one lucky winner, first prize and grand prize, will go from being a complete newcomer to receiving $5,000 for a short story, plus the money he or she would earn from publication and reprint rights.

No other science fiction prize comes close to this.

Dave Wolverton, who succeeded Budrys as WotF Coordinating Judge in 1991, described his process.

“I read thousands of stories each year, trying to find promising new writers, and I began to notice a trend. I would start out the year in something of a cold panic. When those first few crates of stories started hitting my doorstep, I would pull them open and cross my fingers, hoping that in them I would find the next Heinlein or Orson Scott Card or Anne Rice or Andre Norton.

“That’s the dream, to discover someone really marvelous. And if I can’t find someone who is of that quality, then at least I want to find some stories that are exceptional—stories that we can laugh with, or cry with, or which hold some rare beauty or simply astonish us. Always as I read through the boxes of manuscripts, I found many, many stories that didn’t measure up. Then the cold sweat would get colder. But every quarter I found a handful of stories that did measure up. At that point, I’d give a sigh of relief at the very least. I have even been known to jump up and down if I found something really exceptional.

“I’m sure our art judges went through the same thing each quarter.

“Some of the stories and illustrations in each anthology were more polished or accomplished than others. Some were from authors or illustrators who chose, for whatever reason, to create perhaps only one or two works in this genre and then moved on to other things.

“But some of the authors and illustrators I helped discover went on to become recognizable names in later years. Of that, I am sure. And over the course of the volumes I edited, I have to say that I’m pretty proud of the work that we’ve published. After each year, I finished the job knowing that there never was any reason to break out into that cold sweat. It never failed. Good new authors and illustrators kept coming.”

Though L. Ron Hubbard passed away in 1986 at the age of 74, his literary agency continues to administer the Writers of the Future program, and it has thrived for a full quarter century.

Three years after the first Writers of the Future Award Ceremonies, in 1988, a parallel contest for novice illustrators was launched. The Illustrators of the Future Contest boasted science fiction legend Frank Kelly Freas as its Coordinating Judge. The Illustrators of the Future Contest has likewise had a long and successful run in training and encouraging many of the brightest stars in science fiction illustration, with a veritable hall of fame of judges, including Frank Frazetta, Frank Kelly Freas, Will Eisner, Jack Kirby, Paul Lehr, Ron Lindahn, Val Lakey Lindahn, Bob Eggleton and Vincent Di Fate.

Twenty-five years later, many of the writers who were first published in earlier WotF volumes are now appearing regularly in magazines and with novels; other major publishers in the field seek them out. A gratifying percentage of Contest winners have already been contenders for top awards on an equal footing with long-established SF authors, and many have gained significant recognition in that arena; some have even become judges for the Contest. No other field of popular literature offers its novices such an opportunity for lifelong success.

Over the first twenty-five years of its existence, the Writers of the Future Contest has produced three hundred winners, enthusiastic and dedicated new writers from the United States, Canada, Australia, England, France, Zimbabwe, Ethiopia, Sweden, Ireland and Scotland. The total prize money awarded amounts to $325,000.

Publishers Weekly acknowledged the Contest as “the most enduring forum to showcase new talent in the genre.” In 2005, Library Journal presented the Contests its “Award of Excellence” in recognition of twenty-one years of “discovering, fostering and nurturing writers and illustrators of speculative fiction and successfully infusing new talent into the fields of literary and visual arts.”

The important thing about the design for the program is that it reflects a profound grasp of how creativity works—that it must be supported but left unfettered. At its core, the program does only two things: it encourages talent with measured and practical rewards with no strings attached, and it imposes no form of “editorial policy” on the winning stories or on the future work of their authors.

As Algis Budrys wrote, “To me the impressive thing is not so much that L. Ron Hubbard chose this way to impart a lasting, fruitful legacy to the field in which he had done so much significant work. It is that he did it so well.”