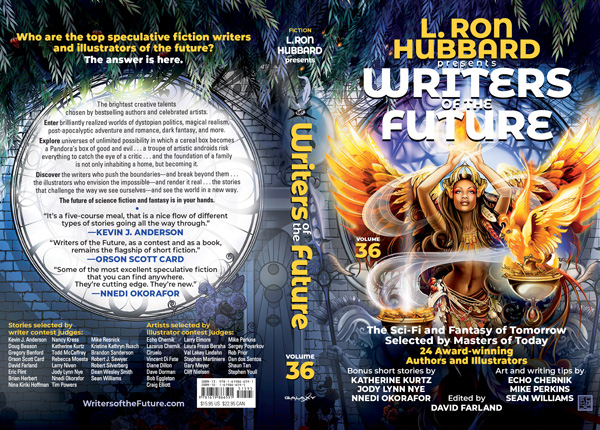 The Writers & Illustrators of the Future Achievement Awards has been rescheduled for August 27, 2020. We look forward to seeing the winners, judges, and guests here in Hollywood. And if you are unable to attend the event in person, feel free to join us for the live broadcast starting at 7 p.m. (pacific time).

The anthology got nice reviews from the Library Journal, which highlighted three outstanding stories and said “readers who like sf and short stories should thoroughly enjoy it,” and Midwest Book Review called it a “must have” for library and academic collections as well as fans.

The Heinlein Society, which is dedicated to the proposition that some debts cannot be repaid but must be paid forward, presented a letter of congratulations and thanks to the Writers and Illustrators of the Future Contests at the thirty-fifth Annual Awards Ceremony for “outstanding work in discovering and nurturing promising new authors and illustrators in the field of science fiction and fantasy.”

The anthology’s thirty-fifth volume won Best Anthology from the New York City Big Book Award, which honors books that have a worldwide appeal.

Meanwhile, at the Benjamin Franklin Awards (sponsored by the Independent Book Publishers Association)—Writers of the Future Volume 34 won a Silver Award in the Fiction: Science Fiction & Fantasy category.

CONTEST GROWTH
Both Contests have brought in more stories and art entries this year than any previous year before. We’re growing and not looking back.

This year, we had Contest winners from the countries of Turkey, Iran, Vietnam, Australia, the United Kingdom, and the United States.

Scot M. Noel (WotF 6) launched a new magazine of science and fantasy fiction, DreamForge, with a two-page feature on Writers of the Future and Dave Farland (WotF 3) as the Contest’s Coordinating Judge.

Nnedi Okorafor (WotF 18) and actress Viola Davis are working together on a TV series adaptation for Amazon based on the Octavia E. Butler novel Wild Seed.

Dan has been the recipient of many awards. He is a Rhodes Family Scholarship winner, a five-time Hugo Award nominee for Best Artist, and has received both gold and silver medals from Spectrum: The Best in Contemporary Fantastic Art. His illustrations have graced the #1 spot on the New York Times bestseller list numerous times and his covers are seen in bookstores in dozens of countries around the world.

Dan dos Santos is one of the most recognized artists in his field with hundreds of book covers to his credit.

Craig Elliott is based in Los Angeles, California. He received his education at the famed Art Center College of Design in Pasadena, California.

Craig’s carefully crafted and arresting images of nature and the human form have captivated audiences with their visual and intellectual celebration of the beauty in this world and beyond. A multifaceted artist, he is also an accomplished landscape architect, sculptor and, most recently, jewelry designer.

In addition to his fine art, Craig has had a hand in designing many of today’s most popular animated films from Disney and Dreamworks Studios including Hercules, Mulan, The Emperor’s New Groove, Treasure Planet, Shark Tale, Flushed Away, Bee Movie, Enchanted, Monsters vs. Aliens, and The Princess and the Frog, as well as other upcoming features.

THE PASSING OF A JUDGE
Mike Resnick, a beloved judge of the Writers of the Future Contest, passed away on January 9, 2020, at the age of seventy-seven, after a brave battle with cancer.

Mike won numerous awards for his work, including five Hugo Awards and one Nebula, but had also won awards in many other countries. Indeed, at the time of his passing, he had won more awards for his short fiction than any other person in the field of science fiction.

He joined the Contest as a judge in 2008, and in 2017 was awarded the L. Ron Hubbard Lifetime Achievement Award for his service to the field.

Mike always showed tremendous generosity to new writers. As a publisher, he often sought out new writers to publish in the magazine, Galaxy’s Edge, and in various anthologies. In the 1990s, he noted that he published more first stories from authors than all three of the major speculative fiction magazines combined. He even coauthored stories with more than fifty new authors. And every year when we held our workshops, Mike could be found late at night, taking time to mentor the latest talent.

Mike was a giant of a man, a person with a great heart, and tremendous talent, who was noted for always being found in company with his “writer children.”

Mike has passed away, but his influence and legacy lives on.

THE PASSING OF A WINNER
Emeka Walter Dinjos, the first winner of the Writers of the Future Contest from Nigeria (WotF 33) passed away from diabetes on December 12, 2018 at 34 years old.

He actively began reading and writing English in 2010. He quickly mastered the language and won the Writers of the Future in 2017. He was also published in Beneath Ceaseless Skies, Galaxy’s Edge, Deep Magic, and Myriad Lands. His novelette, “SisiMumu” was featured in Future Science Fiction Digest, Issue 1.

He was a bright spark and is missed.

AWARDS FOR WINNERS
Our past artists and writers, along with our judges, continue to publish widely across many fields and in many mediums. We can’t mention all of their accomplishments, but here are some recaps of notable awards (and the WotF volume where you can first see the author’s or illustrator’s work):

Asimov’s Readers’ Awards
Finalist: Best Novella—Contest judge Kristine Kathryn Rusch for “Joyride” and for “The Rescue of the Renegat.”
Finalists: Best Novelette—Contest judges Nancy Kress for “Cost of Doing Business” and Kristine Kathryn Rusch for “Lieutenant Tightass.”
Finalist: Best Cover—Eldar Zakirov for his covers on the January/February and the September/October issues.

CONTEST SHOUT-OUT
Britain’s Got Talent finalist Daliso Chaponda announced his 2019 UK “Blah Blah Blacklist” tour following a very successful “What the African Said” tour which sold out 50+ dates throughout the UK. Chaponda has continuously promoted the Contest throughout his celebrity career and noted: “Yes, that Writers of the Future certificate was a ‘don’t give up’ totem for a decade!”