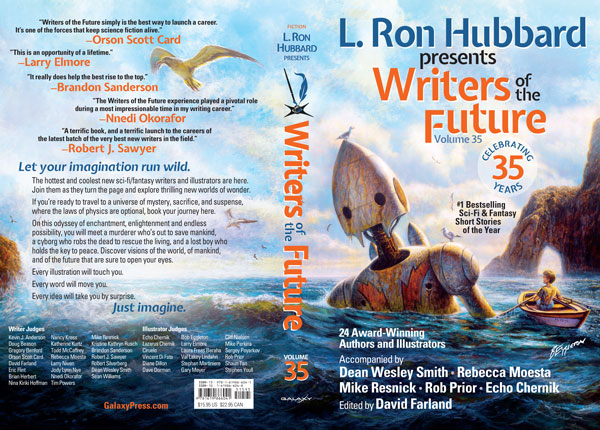 Twenty-four writers and artists once again converged on Hollywood for the 35th Annual Writers & Illustrators of the Future Awards Celebration.

The awards event was held in the visually opulent Grand Ballroom of the Taglyan Cultural Complex nestled in the heart of Hollywood. Catered by Divine Food, the festivities began with hors d’oeuvres and cocktails, followed by a delicious Mediterranean four-course meal. The reception and book signing after the awards presentation was held in the plush foyer and gardens of the Taglyan.

Greeting guests as they walked into the venue was an 18-foot replica of Bob Eggleton’s missing robot straight off the cover of L. Ron Hubbard Presents Writers of the Future Volume 35.

The keynote speaker was Ed Hulse, an award-winning journalist and historian who specializes in documenting American popular culture of the late 19th and 20th centuries. Ed talked about the Golden Age of Science Fiction and post World War II, with a veritable explosion in pulp magazines. Hulse said, “The Golden Age of science fiction isn’t a relic of the past. It has seeped into our popular culture in myriad ways. The Galactic Empires of Isaac Asimov’s Foundation series were foremost in the mind of George Lucas when he conceived Star Wars, and Doc Smith’s Lensmen were among the influences of his Jedi knights. In the first film’s famous bar scene, he even lifted a sequence from L. Ron Hubbard’s story The Kingslayer virtually word for word. Van Vogt’s mutant Slans were forerunners of Marvel’s X-Men Countless popular motion pictures and television shows have adapted classic Golden Age pulp yarns, officially and unofficially.”

Speaking to the winners, Hulse continued, “These storytellers all contributed mightily to the evolution of science fiction. And now you’re part of that evolution. You represent a new generation of writers, alternately building upon and superseding literary traditions now more than a century old. Yours are the ideas and concepts that will shape science fiction for years to come. I look forward to seeing how you’ll respond to the challenge of making science fiction relevant to the readers of tomorrow.”

Artist and Illustrators of the Future Founding Judge Bob Eggleton was presented with the L. Ron Hubbard Lifetime Achievement Award for Outstanding Contributions to the Arts.

Dr. Beatrice Kondo, daughter of the late Writers of the Future Judge, Dr. Yoji Kondo, and a member of the Heinlein Society Board of Directors, presented the Executive Director of Author Services, Inc. with a Letter of Recognition. During her presentation, Dr. Kondo said, “L. Ron Hubbard established the Writers of the Future contests as a means for new and budding writers to have a chance for their creative efforts to be seen and acknowledged. On behalf of the Heinlein Society and issued by its President and Chairman, George E. Rule, I would like to present a letter of recognition to L. Ron Hubbard and his enduring Contest on the occasion of the 35th Anniversary.”

Every year we strive to create the highest quality anthology possible. Our judges and administrators have the delightful task of searching for the best writers and illustrators in the world to win our contests. Thanks to the talented individuals who entered, the book was an international bestseller and received overwhelmingly positive reviews.

We are proud to announce that Volume 34 was on multiple bestseller lists, including Publishers Weekly and Amazon. In fact, WotF 34 was #1 in nine separate categories on Amazon, including, “Hot New Releases (for Short Stories—Sci-Fi Short Stories),” “Science Fiction—Canada,” “Anthologies—UK,” and “Sci-Fi and Fantasy Anthologies Kindle Edition—US.”

We are also happy to share that we were recognized by some of the most influential book reviewers in the industry. Publishers Weekly declared that Volume 34 “features expertly crafted and edited stories and art, running the gamut from humorous to bone-chilling.… This inspired, well-rounded anthology has a little something for everyone.” Midwest Book Review stated, “a ‘must read’ for all dedicated science fiction and fantasy fans.” Finally, Booklist said, “This delightful collection holds obvious appeal for fans of speculative fiction, but it should also be recommended to aspiring writers as well.”

The L. Ron Hubbard Writers and Illustrators of the Future Contests continue to grow. They are among the longest-running writing and art contests in the world and continue to attract thousands every year. And this past year, we once again had the highest number of entries since the beginning of both contests.

Due to the high growth of the Contest, we invited award-winning author Kary English to act as first reader. Her job will be to make a first pass on the stories, deciding which to send on to David Farland for further judging and which can be easily rejected. Kary is a past first-place winner with the Contest and a Hugo finalist for her short fiction.

This year, we were delighted to add a new judge to our Writers’ Contest, Katherine Kurtz. Katherine is the historical fantasy author of the very popular Deryni series, the Templar series, and the Adept series. With a strong interest in writing, history, and police work, she created her own subgenres of “historical fantasy” and “crypto-history.” She says, “I always try to help up-and-coming writers and am delighted to be able to judge in the L. Ron Hubbard Writers of the Future Contest.” We’re just as delighted to be able to work with her.

Publications and Major Achievements by Past Winners

With nearly 800 Contest winners, it is virtually impossible to keep track of everyone’s accomplishments. But here are some highlights from the past year:

Artem Mirolevich—Illustration winner, has been busy with art exhibits of his work and has started his own contest to get writers and illustrators to work together. He asks that writers create stories based on his illustrations.

Myke Cole—Former winner was cast on CBS’s Hunted last year and has released one more book in his Sacred Throne trilogy, The Armored Saint, as well as another novel, Legion Versus Phalanx: The Epic Struggle for Infantry Supremacy in the Ancient World.

Nnedi Okorafor—Author of the soon-to-be-released Black Panther movie tie-in story, Shuri: The Search for Black Panther, has written two other stories for the franchise: Long Live the King and Wakanda Forever. Okorafor was also seen at this year’s Emmys when she was escorted by George R. R. Martin, who is producing her award-winning novel Who Fears Death.

Each year, our winners and judges grace the covers of the three largest short story magazines in speculative fiction today: The Magazine of Fantasy and Science Fiction, Asimov’s Science Fiction, and Analog Science Fiction all throughout the year. We have at least one winner on each cover, sometimes more.

We also continue to see our award-winning and New York Times bestselling authors publish novels in their series. Two of the most prominent are Death’s End, translated by Ken Liu, and Binti: The Night Masquerade by Nnedi Okorafor.

Recognitions and Awards in 2019 for L. Ron Hubbard, Our Judges, and Winners

The L. Ron Hubbard Writers and Illustrators of the Future Contests were recognized on their thirty-fourth anniversary with Certificates of Recognition from the California Senate, Senate President Kevin de León, and City of Los Angeles Councilmember Thirteenth District Mitch O’Farrell.

NYC Big Book Award: We’re proud that L. Ron Hubbard Presents Writers of the Future Volume 34 was the winner in the anthology category for the New York City Big Book Award. Book submissions were collected from six continents: Africa, Asia, Australia, Europe, North America, and South America. The purpose of the award is to recognize high-quality writing from around the world.

Our Contest winners continue to be recognized for their talent. And this past year’s wins across sci-fi and fantasy are tremendous. We’re proud that their works were first published in the Writers of the Future anthology.

Analog Awards: In 2017, C. Stuart Hardwick’s “For All Mankind” won Best Novelette. Brian Trent’s “Galleon” was a finalist in the same category. Martin Shoemaker’s “Not Far Enough” and Howard V. Hendrix’s “The Girls with Kaleidoscope Eyes” were both finalists for Best Novella. Eldar Zakirov was a finalist for Best Cover.

Asimov’s Readers’ Award: In 2017, Eldar Zakirov won Best Cover for the September/October issue and Bob Eggleton was a finalist for his July/August issue. Robert Reed’s “The Speed of Belief,” Kristine Kathryn Rusch’s “The Runabout,” and R. Garcia y Robertson’s “The Girl Who Stole Herself” were all finalists for Best Novel/Novella.

Ditmar Awards: Shauna O’Meara won for Best Fan Artist and was a finalist for Best Novella with “Island Green.” Cat Sparks’s Ecopunk! won Best Collected Work. Sparks was a finalist in three other categories as well: Best Novel for Lotus Blue, Best Short Story for “Prayers to Broken Stone,” and the William Atheling Jr. Award for Criticism or Review for “Science Fiction and Climate Fiction: Contemporary Literatures of Purpose.”

Geffen Awards: Brandon Sanderson’s Calamity was a finalist for Best Translated YA Book.

Gemmell Awards: Brandon Sanderson’s Oathbringer was a finalist for The Legend Award for Best Fantasy Novel.

Life, The Universe and Everything Award: presented to L. Ron Hubbard for the Writers of the Future Contest.

Mexico’s National Literature Award: Presented by the Mexican Association of Publishing Houses and the Federal Government of Mexico, Kevin J. Anderson and Orson Scott Card were awarded in the categories of science fiction and fantasy, respectively.

This is all the news for this year. We’d like to congratulate all of our fine writers and illustrators for a great year. We look forward to next!