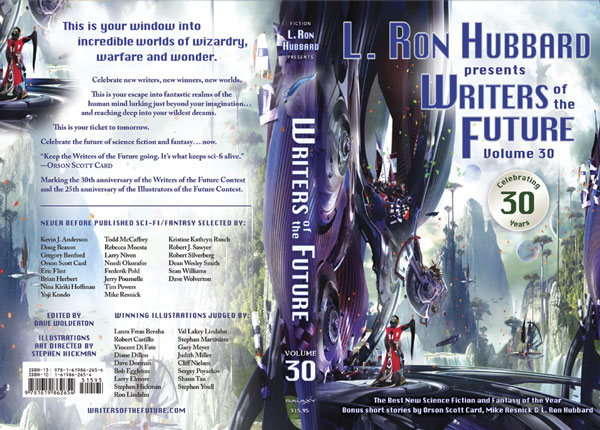 The 30th Annual Awards Ceremony was held on Sunday, April 13, at the famed Wilshire Ebell Theatre in Los Angeles. Winners from the contest year October 1, 2012, to September 30, 2013, attended. The Writers and Illustrators of the Future workshops were held in Hollywood at Author Services, Inc.

The Writer’s Digest Award for service to the writing community was presented to L. Ron Hubbard and the Contest by Nancy Kress at the awards ceremony last year (shortly before we invited her to be a judge). Nancy has been a columnist for Writer’s Digest for the past sixteen years.

Letters of acknowledgment and congratulations to the Contests, their founder L. Ron Hubbard and all the winners were received from the Mayor of Los Angeles, Eric Garcetti, Member of Congress from Florida, Corinne Brown, Los Angeles’s very own Member of Congress, Adam Schiff, and Californa Senator Dianne Feinstein.

In 2013, the Writers and Illustrators of the Future Contests continued their broad growth, with both Contests receiving more entries than ever before. Entrants to the Contests came from over 168 countries, and our actual winners, including honorable mentions, are represented by writers and illustrators from more than three dozen nations.

From the very first volume of Writers of the Future, past winners have distinguished themselves in ongoing careers. In just the past year, those winners have published 45 novels and more than 200 short stories. In addition, they—along with past artist winners and Contest judges—have racked up an astonishing number of awards, honors and nominations.

From the earliest winners to the most recent participants, including artists and judges, here is the impressive array of honors.

Robert Reed (Vol. 2) took third place in the 2013 Sturgeon Awards, while Contest Judge Frederik Pohl won the Sturgeon Award for Distinguished Service. Reed also competed with himself in the category for Best Novella in the Locus Awards, with three of his novellas under consideration, and in addition joined the already crowded field of nominations for the Locus Award for Best Collection.

Mary Turzillo (Vol. 4) was a finalist for the Bram Stoker Award for Best Horror Poetry Collection.

The 2012 Goodreads Choice Award for Best Science Fiction went to Stephen Baxter (Vol. 5), in collaboration with Terry Pratchett, for the novel The Long Earth. Baxter was also nominated for the Locus Award for Best Collection.

Winner and Artist Judge Shaun Tan (Vol. 8) was a finalist for a Locus Award for Best Artist. In addition, Tan was a finalist for the Aurealis Award from Australia for Best Children’s Book and for the 2014 Spectrum Fantastic Art Award, along with Omar Rayyan (also Vol. 8).

Alan Smale (Vol. 13) was among the nominees for the Locus Award for Best Novella.

Lee Battersby (Vol. 18) was a finalist for the Australian Aurealis Award for Best Horror Novel for The Marching Dead.

Ken Liu (Vol. 19) won the Nebula for Best Short Story with “Mono no Aware,” and was nominated for a Nebula for Best Novelette as well as a finalist for the Locus Award for Best Short Story. Ken additionally won the WSFA Small Press Award for his story “Good Hunting.” Jay Lake (also Vol. 19) was nominated for a Hugo for “The Stars Do Not Lie” and was a finalist and nominee for the Locus Award for Best Novella. The 2013 Lifeboat to the Stars Award was won by the novel Tau Ceti, written by Contest Judge Kevin J. Anderson in collaboration with winner Steven Savile (Vol. 19) and edited by Judge Mike Resnick.

Ian McHugh (Vol. 24) was a finalist for the Aurealis Award for Best Fantasy in Short Fiction.

Artist Douglas Bosley (Vol. 25) was the first-place winner of the 2013 National Society of Arts and Letters Printmaking Award.

K.C. Ball (Vol. 26) was nominated for the Locus Award for Best Novella. Jingxuan Hu (also Vol. 26) won the Public Choice Prize in the final awards to winners of the ArtGemini Prize 2013.

The winner of Canada’s Aurora Lifetime Achievement Award went to Judge Robert J. Sawyer, who was also nominated for Triggers for Best Novel in English.

Awards are not all the honors reaped by our winners. For example, Patrick Rothfuss’s (Vol. 18) bestselling Kingkiller Chronicle series was optioned for film by Twentieth Century Fox, while Jason Fischer (Vol. 26) is the first Contest winner to have his story written as an opera libretto.

Robert Castillo (Vol. 24) was storyboard artist for the documentary Kids for Cash and The Angriest Man in Brooklyn, a film releasing later this year. Ty Carter (Vol. 26) is working on the upcoming Peanuts movie, which is scheduled for release during the 2015 holiday season. He also recently published a book Musings and Wanderings.

The just-released 2014 Campbellian Anthology included ten past winners. Of these, two are from Vol. 28 and eight are from Vol. 29. Included in the anthology from Vol. 28 were David Carani and Gerald Warfield. Those from Vol. 29 were Alisa Alering, Tina Gower, Marina Lostetter, Chrome Oxide, Shannon Peavey, Christopher Reynaga, Stephen Sottong and Brian Trent.

Sadly, this past year, our longtime friend and Judge Frederik Pohl passed away. The Science Fiction and Fantasy Writers of America named Pohl a Grand Master in 1993. In 2000, he was honored with the L. Ron Hubbard Lifetime Achievement Award for Outstanding Contributions to the Arts. He became a judge for the Writers of the Future Contest in 1985 and was one of the instructors at the first WotF Workshop in Taos, New Mexico.