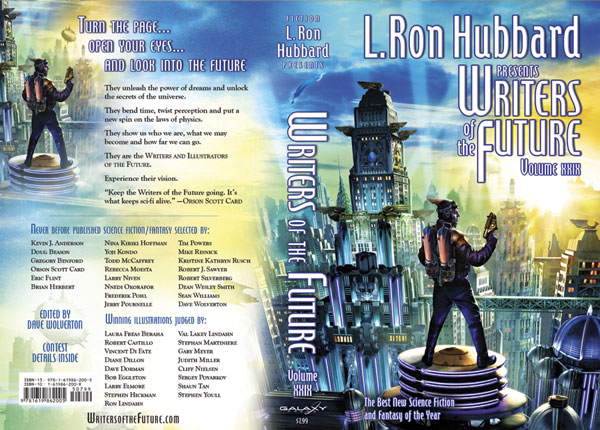 The Twenty-ninth Annual Awards Ceremony was held on Sunday, April 14, at the famed Wilshire Ebell Theatre in Los Angeles. Winners from the contest year October 1, 2011, to September 30, 2012, attended. The Writers and Illustrators of the Future workshops were held in Hollywood at Author Services, Inc.

In addition to the hundreds of civic and community proclamations received over the past twenty-nine years, California Legislature Assemblyman Mike Gatto, in celebration of this year’s Achievement Awards, bestowed Certificates of Recognition on the L. Ron Hubbard Writers and Illustrators of the Future Contests, as well as all the winners.

The L. Ron Hubbard Lifetime Achievement Award for Outstanding Contributions to the Arts was presented to Dr. Gregory Benford.

Each year, our past writers, illustrators and judges make major accomplishments. In 2012, this trend continued. We had three Writers of the Future alumni nominated for World Fantasy Awards: Ken Liu (WotF 19), Tim Powers (WotF judge), and Karen Joy Fowler (WotF 1). Ken Liu won the short story category with “The Paper Menagerie,” while Tim Powers won the collection category with his The Bible Repairman and Other Stories.

With the Nebula Awards, we had five nominees: Carolyn Ives Gilman and Ken Liu for Best Novella; Brad R. Torgersen for Best Novelette; and for Best Short Story, Tom Crosshill (WotF 26) and Aliette de Bodard (WotF 23). Ken Liu won in his category with “The Paper Menagerie.”

David Farland (WotF 3 and Coordinating Judge) won seven awards this past year for his novel Nightingale, including the International Book Award for Best Young Adult Novel of the Year, and the Hollywood Book Festival Award for Best Book of the Year.

In 2012, 193 short stories and over a dozen novels were published by Writers of the Future winners. Heather McDougal (WotF 25) released her first published novel Songs for a Machine Age in November.

Tom Doyle (WotF 28) sold his novel American Craftsmen, the first in a series featuring ancient American magic and espionage, to Tor in a major auction. A collection of his short fiction, The Wizard of Macatawa and Other Stories, also sold.

Each year, the contest administration undergoes changes and growth. In 2012, Leo Dillon, one of our dear illustrator judges, passed away. Leo had been illustrating for over fifty years, with his work gracing many children’s books and publications, and had served as a judge for fourteen of them, inspiring countless new artists.

K.D. Wentworth, who acted as Coordinating Judge for the writing contest and editor of the anthology, also passed away. K.D. had won the contest in 1988, and she served as a judge since 2000. She was a prolific short story writer, novelist and educator, and was beloved by all of the writers whom she taught during her twelve years with the Contest.

We’ve added a fantastic new writing judge: Nnedi Okorafor, an American-born author with her roots in Nigeria. She was a Writers of the Future published finalist in 2002 and went on to publish prolifically and win dozens of honors on the international stage, including the 2011 World Fantasy Award for Best Novel with her book Who Fears Death.

We also added a new illustrating judge: Larry Elmore, who is well known for his work as a fantasy artist for TSR. He has worked on Dragonlance and done artwork for dozens of magazines and book covers.

Additionally, we gained another Coordinating Judge, Dave Wolverton, also known in fantasy as David Farland, who acts as first reader for story submissions. He forwards the best entries on to the other writing judges, edits the anthology and teaches the writing workshop.

We will miss and remember Leo Dillon and K.D. Wentworth as we look forward to another successful year of Writers and Illustrators of the Future.