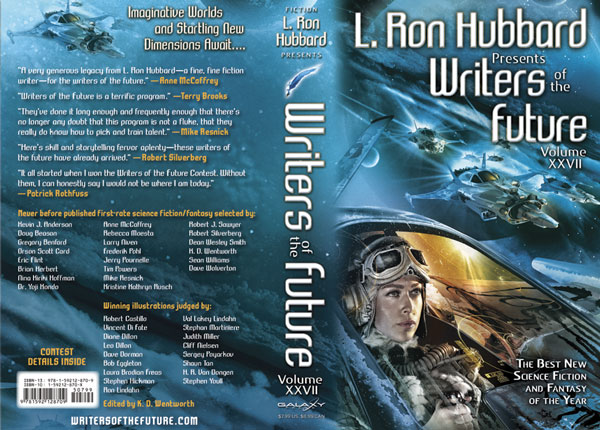 The twenty-seventh Annual Awards Ceremony was held on Sunday, May 15, at the Hotel Roosevelt in the heart of Tinseltown. It took place once again in the Blossom Room, the same place that hosted the very first Academy Awards. Winners from the contest year: 1 Oct 2009 to 30 Sep 2010 attended. The Writers and Illustrators of the Future workshops were held in Hollywood at Author Services, Inc.

This year’s keynote speaker was Dr. Simon Pete Worden, retired US Air Force General and the Director of the NASA Ames Research Center, which provides critical R&D support for the nation’s aeronautics and space missions.

Keir Graff, Senior Editor of Booklist, a publication of the American Library Association also spoke and presented Writers and Illustrators of the Future with the Publishing Industry Award in recognition of 27 years of discovering and supporting emerging writers and artists in science fiction and fantasy.

The biggest change for the L. Ron Hubbard Writers and Illustrators of the Future Contests this year was our decision to take electronic submissions, starting with Quarter Two.

In news, the latest Pirates of the Caribbean movie is based on Contest Judge and Lead Workshop Instructor Tim Powers’ book On Stranger Tides and is due out this summer.

One of our newest Illustrators of the Future judges and a past winner from 1991, Shaun Tan, won an Oscar for his short animated film The Lost Thing. He also won the 2010 Hugo Award for Best Professional Artist as well as the world’s largest prize designed to promote interest in children’s and young adult literature and in children’s rights, the Astrid Lindgren Memorial Award for 2011.

Writers of the Future winner Patrick Rothfuss’s second book, The Wise Man’s Fear, hit the #1 position on the New York Times bestseller list. His first in the series, The Name of the Wind, was also a New York Times bestseller. Both books are based in the world created for his winning Writers of the Future Volume XVIII story, “The Road to Levenshir.”

Three of our Writers of the Future winners are on this year’s Nebula ballot: J. Kathleen Cheney, Eric James Stone and Aliette de Bodard. Published Finalist Nnedi Okorafor is also on the ballot.

Writers of the Future Contest Judge Robert J. Sawyer received a Hugo nomination for his novel Wake. One of the episodes of Flash Forward, the series based on Sawyer’s novel, was nominated for a Best Dramatic Presentation—Short Form Hugo.

Writers of the Future Contest Judge Mike Resnick received a Hugo nomination for his short story “The Bride of Frankenstein,” published in Asimov’s Science Fiction.

Illustrators of the Future Judge Bob Eggleton was nominated for a Best Professional Artist Hugo.