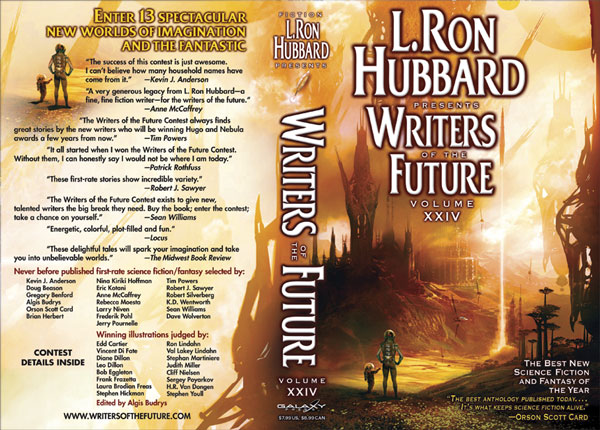 The Writers and Illustrators of the Future returned to Author Services, Inc., in Hollywood, California, for the twenty-fourth annual Awards. The ceremony was held on Friday, August 15, 2008. Aleta Jackson, cofounder of XCOR Aerospace, gave a rousing guest speech about the possibilities of private suborbital flights and space tourism. Dr. Sandra Thomas (NAACP representative for southern California) and actress Elisabeth Moss were guest presenters.

This year also marked an unusual first: 2005 writer winner Stephen R. Stanley became a 2008 Illustrators of the Future winner, the first person ever to win both Contests.

Both Contests have grown considerably in stature and impact within the science fiction and fantasy genres, as anyone who has won either contest will tell you. But an interesting thing has started to happen. As the Contests become more established as the premiere launching point for science fiction and fantasy careers, where we once saw only the published winners proclaiming their newly earned status, we now also find finalists proudly proclaiming their achievement in their bios as one of their notable accomplishments.

As has been true since the inception of these Contests, our judges remain the very top names in their fields. Those names can all be found on the back of this book, and they are each and everyone thanked for their continued support and contribution.

This year we are very proud to announce Cliff Nielsen as our most recent Illustrators of the Future Contest judge. He has created over 1100 images for such high-profile series as the X-Files, Star Wars, The Crow, A Wrinkle in Time, The Chronicles of Narnia, Star Trek and Philip Pullman’s His Dark Materials.