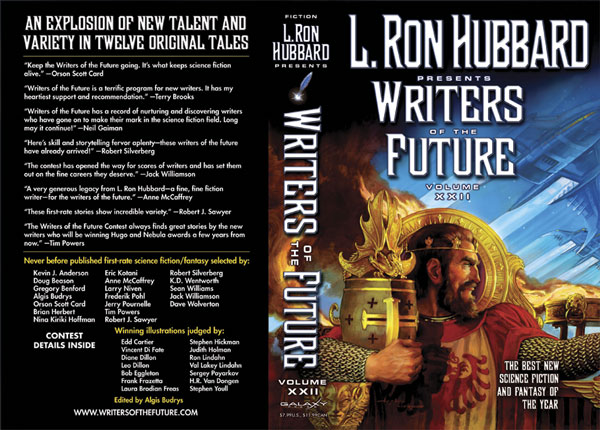 The San Diego Aerospace Museum in San Diego, California, was the site of the twenty-second annual Awards ceremony, held on Friday, August 18, 2006. Before the beginning of the event, winners, judges and their guests were given a special behind-the-scenes tour of the museum.

After the conclusion of the ceremonies, the Aerospace Museum hosted a celebratory book signing for winners to autograph their newly released copies of Volume XXII. The following day, winners and many of the judges gathered for an outdoor signing at Mysterious Galaxy bookstore in San Diego, California.

The judges for this year are named on the cover of this book. And, as has been true since the beginning of the Contest, these professionals comprise many of today’s top names in the fields of science fiction and fantasy literature and art.

This year, we are proud to welcome our Writers of the Future volume nine winner, now South Australia Great Award for Literature winner and New York Times bestselling author, Sean Williams, on board as a judge. Since winning the Contest, Sean has gone on to publish twenty novels and over sixty short stories.

The enterprise goes ever forward, and the authors and illustrators in this volume will, in due course, take their firm place in the history of creative arts.