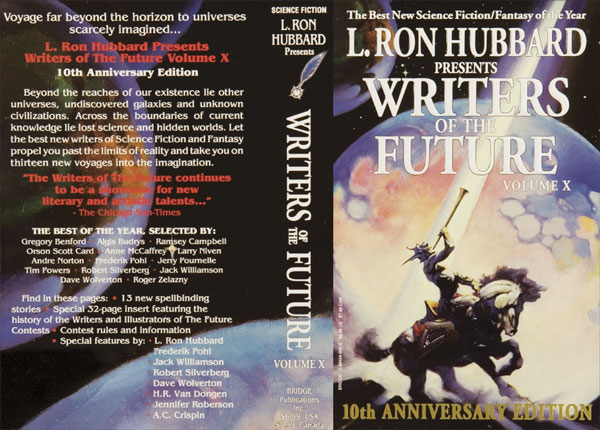 A decade of the Writers of the Future Contest! The tenth-anniversary celebration was held in the lush Garden Pavilion at the Chateau Elysée in Hollywood, California on Friday, May 27, 1994.

Hans Janitschek, president of the Society of Writers at the United Nations (who had hosted the WotF event in 1989), returned to deliver a brief address. Ray Bradbury was among the special guest attendees. As in other years, winners, judges and attendees placed their thoughts and predictions inside a time capsule.

All of the active founding Contest judges received a plaque of appreciation for their service in helping new writers. Ceremony attendees were treated to a special commemorative booklet celebrating a decade of the Contest.

In the week prior to the Awards event, as an experiment for WotF’s tenth anniversary, the workshop was opened to a much larger pool of aspiring writers beyond just the Contest winners.