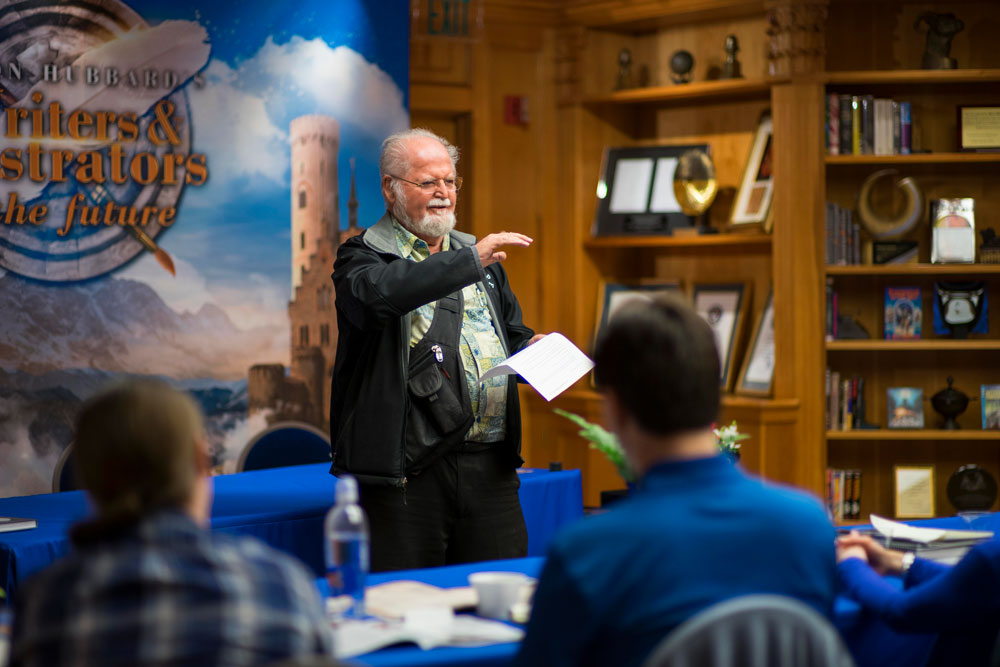 I can’t help you sell your early work in the 1980’s. To enter the field my way you’ll need a time machine set for 1964. That’s when every novice was trying to write New Wave, except me, and an ecological niche was left wide open.

I can’t tell you how to write, not in a thousand words. I’ve been telling what I know as fast as I learned it for twenty-two years. My collaborators now know everything I do. I’ve spoken on panels and published articles on writing. Is there anything left to say?

If you want to know that the story you’re working on is saleable, try this: I tell it at a cocktail party. I dreamed up “The Flight of the Horse” one morning, outlined it that afternoon, and by that night was telling the tale to a clutch of cousins. I held their attention. I didn’t miss any points. I kept them laughing. The noise level didn’t drown out anything subtle and crucial. Then, of course, I knew how to write it down so I could mail it and sell it.

I told the sequel the same way (“Leviathan!”) and sold it to Playboy for what was then fantastic money.

This makes for good memories. It’s also a useful technique.

Some of the best stories simply can’t be told this way, and I can’t help you write those. Nobody can. They are rule-breakers. Try some early Alfred Bester collections. But any story you can tell as a cocktail/dinner conversation, without getting confused and without losing your audience to distractions, is a successful story.

So. You want to write a story, and be paid for it, and know that it will be read? You want that now, no waiting? Tell me a story. Tell your brother/wife/cousin/uncle a story: tell anyone you can persuade to listen. Persuading is good practice: you need skill with narrative hooks. Watch for the moments where you lose your listener; watch for where you have to back up and explain a point. Your audience will tell you how to write it. Then you write it.

You won’t need this forever. You’ll learn how to tell the tale yourself.

(My normal audience in the beginning was my brother. Thanks, Mike.)

As for the untellable story, that one depends on subtleties of phrasing or typographical innovations … that one you can postpone. You won’t have the skills to write it for a few years anyway.

We working writers, we’re not really interested in reading your manuscripts. We can be talked into it, sometimes, via the plea of relatives, or sex appeal, or someone to vouch for you.

Do you know how difficult it is to persuade, say Ray Bradbury to read one of your stories? Have you tried yet? You’d be a fool not to, if you’ve got the nerve. An hour of a successful author’s time could be worth a lot to you. What he says will apply to most of your stories.

Ray turned me down twenty-two years ago. He said he didn’t have the time, and he was right.

But we can be persuaded. So here you are, a novice who’s sold a few stories or none, and somehow you’ve talked an established writer into reading one of your stories. What do you do then? Give him your worst story, the one that most needs improving?

A novice writer did that to me when I was also a novice. He told me so after I told him that if I could think of a way to make it saleable, I’d burn it.

Give him your best story! The best is the one most worthy of improvement. It’s the one where your remaining flaws shine through without distractions, and you’ve picked the man who could spot them.

This shouldn’t need saying, but it does. I’ve heard counterarguments. Look: even if you’ve sold one or two, they just barely passed; they could have been better. You know that. He knows how.

(But don’t bother Ray. A thousand novices have broken their hearts trying to write like Ray Bradbury. He has a way of implying a story in insufficient words. It looks so easy, and it can’t be done.)

If the story you’re telling is a complex one—if the reader must understand the characters or the locale or some technical point to understand what’s going on—then you must use the simplest language. Your reader has his rights. Tell him a story and make him understand it, or you’re fired.

This is never more true than in hard science fiction, but it never stops being true.

If you don’t have anything to say, you can say it any way you want to.

Learn your tools. (For instance: the indefinite pronoun is “he.”) You can create imaginary languages, but it’s risky.

Always do your research. One mistake in hard science fiction, in particular, will be remembered forever. Remember: you’re on record.

Start with a story. Tell yourself a story. Are you in this to show off your stylistic skills? They’ll show best if you use them to shape the story. Calling attention to the lurking author hurts the story. The best character you ever imagined can be of immense aid to the right STORY; but if he’s getting in the way, drop him.

A good stylist really can turn a sow’s ear into a silk purse; and he’ll be forgotten in favor of the average yokel who had just brains enough to start with silk.

Don’t write answers to bad reviews. It wastes your time, you don’t get paid, and you wind up supporting a publication you dislike. Granted it’s tempting.

Every rule of writing has exceptions, including these, and I’ve broken many.

You’re not good enough to do that yet.

This article by Larry Niven was originally published in Writers of the Future Volume 2. Larry Niven was working on his master’s degree in mathematics when he dropped out to write science fiction. He broke into professional SF writing in 1964 and has been going strong ever since. Now a giant in the world of science fiction, he is best known for his Known Space future history, a still-growing series of more than thirty novels and stories. Ringworld, the most famous of these titles, won the Hugo, Nebula and Locus Awards. He later co-authored a series of novels with fellow judge Dr. Jerry Pournelle, including the celebrated national bestsellers The Mote in God’s Eye, Lucifer’s Hammer and Footfall. Larry Niven received the L. Ron Hubbard Lifetime Achievement Award for Outstanding Contributions to the Arts in 2006. He has been a Writers of the Future judge since 1985.

Advice for a New Illustrator by Shaun Tan

Science fiction is the herald of possibility: How fantastic fiction has become...
Scroll to top