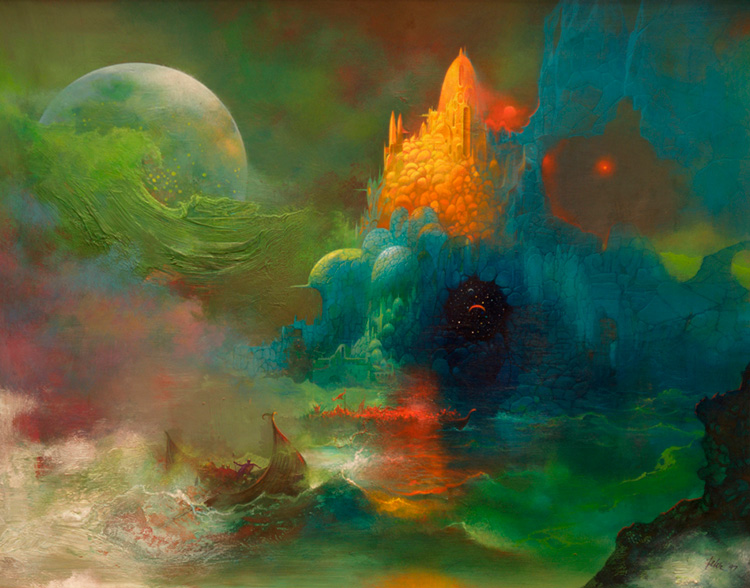 Pictorial art in science fiction and fantasy means different things to many people. I will try to give my personal outlook on the field, which has come about through nearly forty years as a working illustrator. What I have to say will not be etched in stone for everyone; my peers have their own procedures in work, some of which differ from mine. I can only present personal guidelines collected through my own experience.

First, I consider illustration to be a high art form. It has the capacity to enlighten and to project feelings of emotion. It can do more than illustrate an incident in a story. (Although that is of primary importance.)

Just look back to the great illustrators of the past: Daumier, Winslow Homer, N.C. Wyeth, Remington, Howard Pyle, and Chesley Bonestell, to name a few. All were powerful painters whose book and magazine illustrations reflected their own times and move us even today. Redon, Rousseau, Goya, and Paul Klee could be called artists of fantasy. It is far-seeing work that carries us beyond our own time, and into the future with dreams and realistic speculation.

We have the imagery of science fiction all around us in our own world—and it has always been so. With the kitchen light on during a summer evening, look out through the screened window, and you will see what I mean: myriads of insects of all shapes, sizes, and colors, with designs undreamed of—creatures that boggle the imagination. Trees and stumps, forming strange and mysterious shapes. Reflections in water—stones and cratered rocks—it is all there. If we are to become successful in projecting images of other worlds, alien creatures, and the concept of time, we must study our own surroundings first.

I start with the presumption that you want to create convincing depictions of real worlds, even though they may be alien or futuristic in concept. The dominant element in the work of many illustrators is the human figure. Be it in costume or semi-nude, their illustrations revolve around the action of the figures. It is central to the drama in their pictures. Other illustrators make space and starships their specialty and produce dramatic pictures which revolve around that motif. Many depict scenes with dragons and landscapes, and a fantasy theme as their favorite subject.

I have chosen to look upon science fiction as an opportunity to display epic scenes with vast spaces, structures, and armies, along with celebration and conflict; these are the themes I feel at home with. Sometimes I will build my picture around a meaningful symbol found in the story.

Whatever your choice in subject matter, take the one that excites your individual imagination—try not to copy others. To be influenced by other artists is natural, but in the end, to be successful you must create in a personal way. Your work must be your own.

You must live to create visual images. It should be a great passion in your life. Creativity as an artist comes first—science fiction or fantasy illustration comes after that.

You should read—history, mythology, newspapers, fiction, science fiction. Be curious about past, present and future. Draw-draw-draw, and paint-paint-paint from life. Use and enlist the real objects, people and subjects around you. You will never know how to properly interpret photographs and scrap-pictures in a realistic way for your illustrations unless you do this.

Take Keys I and II and dream. Use your imagination, and grasp an image that the story presents—one that excites you. You will know when you see it and read it. If you do this, your personal style will evolve, unlike any other. You will build images that are wonderful and different—even alien—but they will carry force and reality, and be much more convincing to the viewer than the shallow and false feeling that the contrived image will present.

I have been a judge in the Illustrators of the Future Contest since its inception, and have had the opportunity to see hundreds of entries. Now, as coordinating judge, I get to view all submissions and have some thoughts to express about what I see.

My personal experience is with the realistic (and surrealistic) three-dimensional picture with a light source, revealing form, shadow, and atmosphere—not the cutout-looking or flat, decorative style, which is certainly legitimate for the illustration of some stories, but simply not my forte.

If I have one major criticism, it is this: I see too many fragmented pictures with poorly considered ideas. It is nearly impossible to present more than one idea in a single picture (unless you are creating an all-over pattern or a purely decorative piece). In a dramatic illustration, representing a focused scene, one dominant idea will do. Anything more will confuse the viewer. It will not work to portray David slaying the dragon in one corner and having the fantastic spaceship off to one side, next to the necromancer peering into his crystal ball—all of approximately the same size and importance. What is the picture about? What does it mean? Remember, that no matter how well you paint and draw, the most important function of the illustration is to communicate—and do it clearly. One idea is difficult enough to get across.

Another problem that I have observed is a lack of understanding about the use of color. The entries received are executed in black and white, and some are outstanding. However, in the workshops, when we get to look through portfolios, it becomes evident that few of the artists handle color very well. This deficiency brings me back to Key II. The observations that painting from life brings are not manifest in these works.

The influence of direct and reflected light are what make color. Many entrants paint the objects and people in their work in purely local color. Trees are green, branches are brown, metal is gray, flesh is tan, shadows are black or blue or flat purple and cloth is white. Think of your picture as taking place in a shadow box, with the walls painted green, and the floor painted red, for instance—and set a white egg upon a white saucer within it. Shine a warm light down through the top, and observe it closely. You will find that the surrounding colors are reflected around, and influence the color of all objects in the box. A white egg on a white plate, which sits on a white cloth, is anything but pure white. It is a riot of subtle color, and if carefully observed, will make a painting that looks real—not chalky or gray The reflected light of the blue sky from the window will invade the shadows, and the warm light of the sun will give strong form and color to the objects, and pull things together, making a cohesive painting. Think of light as being warm or cool, and of how it influences the local color of the elements in your paintings.

In order to have a successful career in science fiction illustration, you must be able to produce full-color work. It’s fine to do quality black-and-white illustrations, but the livable money is in full, color art.

Another shortcoming for some is poor drawing. There seems to be excessive emphasis put upon rendering figures and objects—concern with technique. If you will observe closely the real world around you, as well as the rhythm and structure of nature, technique will take care of itself. Don’t concentrate on technique and expect it to solve your problems—it will simply act as a cosmetic that tries to cover weak perception. The viewer won’t be fooled—bad drawing is bad drawing, no matter how well the surface is rendered.

I am going to conclude with the admission that most of the aforementioned criticisms have applied to me, personally, in my career growth as an artist, and that now, even at the age of sixty-five, I sometimes forget a basic key here and there. Don’t become discouraged. Don’t give up. Remember, illustration is a noble profession, unlike any other. Be proud, love what you do, be yourself, and always be reminded that better work lies ahead. Enjoy it. 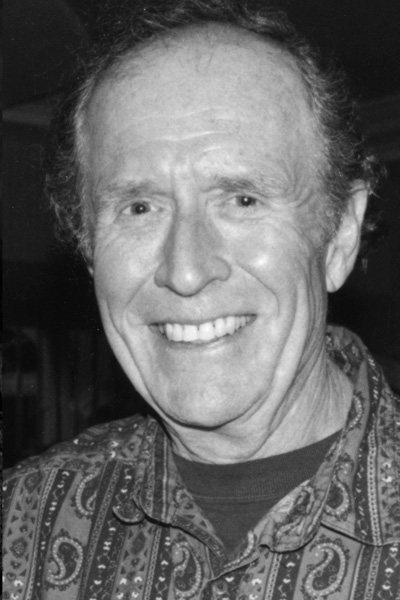 Paul Lehr’s (1930 – 1998) illustrations have appeared on literally hundreds of science fiction books during the 1950s and 1960s. His “Grok” cover for Robert A. Heinlein’s Stranger in a Strange Land was a cult treasure of the 1960s. Lehr’s illustrations have appeared in magazines around the world in such publications as Time, Fortune, Playboy, Reader’s Digest, Omni, Analog and many others. His painting of the first moon landing, which appeared in the Saturday Evening Post in 1959—ten years before the actual event—now is in the permanent collection of the National Air and Space Museum in the Smithsonian Institute. His work has been exhibited in many museums and galleries.

Writers of the Future 4th Quarter Winners Announced for Volume 34