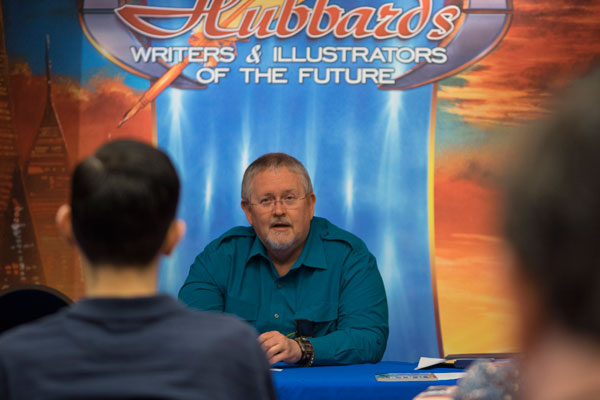 If you say the words “Ender’s Game” to most people, their minds will often automatically jump to Orson Scott Card, the author of the classic science fiction novel (even if they’ve just seen the movie). Yet that’s just a chip off the tip of the iceberg that is Card’s incredible writing career. Beyond his monumental science fiction work, Card has also written modern fantasy, biblical novels, poetry, plays, scripts, and the Tales of Alvin Maker, a fantasy series set in the American frontier days.

Card has long believed in devoting his time and wisdom to other writers and constantly gives back to the very community he first emerged from. This includes being a Writers of the Future judge since 1994 after being a guest lecturer for the Contest’s writing workshops numerous times. He also established an annual literary boot camp where writers go to have their work critiqued, furthering their craft by leagues (and don’t forget to check out his books on writing).

Over the years, Card has numerous distinctions, including winning the John W. Campbell Award, being a twice-winner of the Nebula Award, a four-time winner of the Hugo award, and also the 2008 recipient of the Margaret A. Edwards Award for Young Adult Literature.

Our thanks to Card for being on our panel of judges who search out and select the new voices of tomorrow.

And the Winners Are …
Scroll to top