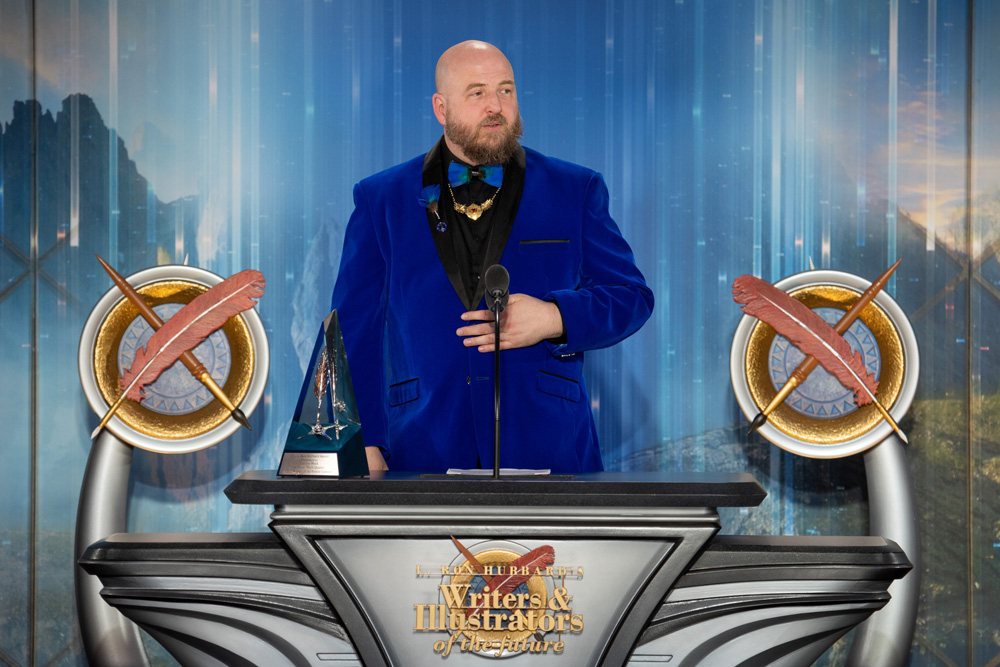 I’ve written this several times. Not because I’m timid or a perfectionist, but from technical difficulties. You see, sometimes life gets in the way.

And that’s my story. Well, one of them. No person only lives one. We live many novels, novelettes, and telenovelas simultaneously, and choosing a narrative for a blog like this was like wrestling with an octopus in a bathtub of spaghetti. So, let’s pretend that this mess is one single timeline and plot, shall we?

I’m not the oldest winner of Writers of the Future, but I came into this career path late. Like many, I had a passion for telling stories since I was a child, but a lack of encouragement led me in a different direction. I infused my stories into my career whenever possible but ultimately had clients and employers curbing my creativity. I embraced a life-long obsession with role-playing games where I could tell stories to my family and friends as a hobby on weekends. But not a day went by when I wasn’t building upon my worlds for them, including characters to meet, trials to overcome, and new wonders to overwhelm them. But the concept of turning pro eluded me.

My parents wanted me to be a writer but hardly encouraged me. Not out of neglect. They were just too busy to read anything. My mother had two careers plus managing the household. My father had the stresses of a failing business in the 80s and other pressures. And both were neurodivergent, each with their own collection of traits (though we didn’t have the language to describe it at the time). Encouragement from school was a little lacking, but, again, there was no one to blame. My school did encourage creativity and great writing. So much so that several friends and I got into little competitions over who could make the class laugh the most without getting crude. I consistently won third place in those contests-not-contests though I had a few stand-outs. So, creative writing didn’t feel to me as much a talent as just a class exercise. Well, one of those friends who was better than I went to Harvard for Poetry and Language Studies, and the other is now a Professor of Philosophy, so I guess I was in good company.

Not surrounded by readers, I devoured media in other forms, including television (of course) and video games of the 80s. My college Professor friend and I used to make our own text-adventure video games, Infocom style. And while I was, again, the third-best artist in class, I noticed that earning praise for art could take a split second instead of waiting however many hours or days before hearing, “Oh, I’m so sorry. I just got too busy to read it.”

Writing is, unfortunately, a privilege. It takes time and effort and, yes, even money. In time, my wife’s career lifted our family to a point where I could seriously look at writing. But I still didn’t. I left my career in Advertising behind to take care of my children’s medical issues and help my wife’s business. But I needed to do more. I started a business that failed. I invented a product and got a provisional patent until the next step cost tens of thousands of dollars to continue. I invented two games that players around the country flipped over and begged to be made. And the near-impossible happened; a game distributor and TWO major retailers wanted my game. All I needed to do was finance them for $100,000 a piece. So, into the trunk they went. I was going backward. In a moment of darkness, my wife said, “It’s time for you to start writing.” I’d love to say, “and I did, and the rest is history,” but that’s not what happened.

Knowing that I didn’t know how to write proper prose, I tested the waters to see how hard it might be. I have friends who are writers. I have friends who own publishing companies. Not one of them encouraged me. A few even discouraged me for their own reasons I can only guess at. My experience and expertise in commercial art earned casual meetings with David Farland (AKA Dave Wolverton), the legendary coordinating judge of Writers of the Future. I sheepishly mentioned to him that I wanted to start writing, but I worried I couldn’t put two words together correctly. He shrugged and said, “Just tell a good story.” He said nothing else, but after so little for so long, THIS was the bell for me. He made it sound like it wasn’t as hard as everyone made it out to be (well, to him, it wasn’t).

Deep-seated tenacity drove me to learn everything. There is an adage that you may finally be good enough if you write a million words. This beautifully melded into one of my favorite film scenes: Vin Diesel’s “500 fights make a tough guy” speech from Knockaround Guys. This made sense to me and drove me towards it. It also helped that an art education and 30-year career in art had already taught me that doing was the best teacher of all. So, I wrote, and I wrote. 2020 was a tragedy in many ways for my family, but that isolation and lack of clients gave me time to put down over 400,000 words in that one year alone.

Yet, I still encountered resistance. I could recite a dozen horror stories of rejections by people who wanted me to stop writing (mostly other writers), but that would derail this story. Eventually, I joined APEX, David Farland’s writing group. At the time, it was invitation-only, but when I learned of it, I emailed David and convinced him to let me in, promising to share my knowledge of marketing and illustration with the group. APEX is where I met my writing family, others with the same passion for improving their craft and becoming the best we could be.

2 1/2 Years and Winning Writers of the Future

It took 2-1/2 years of dedicated writing and crafting from when I first entered to eventually winning and getting published in L. Ron Hubbard Presents Writers of the Future Volume 38. Really, I’m just one of 12 winners with the line between us thinner than onion skin. But I did it. On the one hand, that is an incredibly short period of time to “get there.” But I can’t dismiss the 48 years leading up to it where I learned plot, world-building, character, tension, and hooks. More importantly, that is where I learned my message and my style. Had I gone to college and started writing that early, I might have been horrified at the drivel I would have come up with. Today, my voice is that of an adult with experiences from living and traveling many places around the continent, standing in boardrooms and alleyways, studying art and history, playing sports and hustling pool, marrying the love of my life, and having the most incredible children in the world.

Now, people are finally reading my stories and learning that I have something of value to offer them.

And That’s My Story

And that’s my story. Or one of many.

As of now, I’ve sold another story, and I’m certain I will be proud of my first novel. I keep saying I’m still new because I don’t presume to know enough to share “definitive” answers to the craft (the way I can after 30 years in art & advertising). So, when the opportunity came to write for this blog, I collapsed into a meta-lesson, hoping that something in my story might touch someone out there and help them find their own path. Every author is filled with their own stories. I had a long and successful art career. I’ve learned a dozen computer languages–and parts of two physical languages. I’ve lived and traveled all over the continent. I’ve written and published multiple non-fiction books. I’ve met politicians and CEOs and scientists and gangs and organized crime figures. I’ve partied with celebrities. I’ve appeared on television. I’ve been mobbed in Times Square (mistaken identity). I’ve hustled pool. I’ve done many things I’m proud of and a few things I regret with every fiber of my being. I’ve done so many things and infused those experiences into my stories. And now I’ve won Writers of the Future.

Sometimes life gets in the way. But it is always your path. 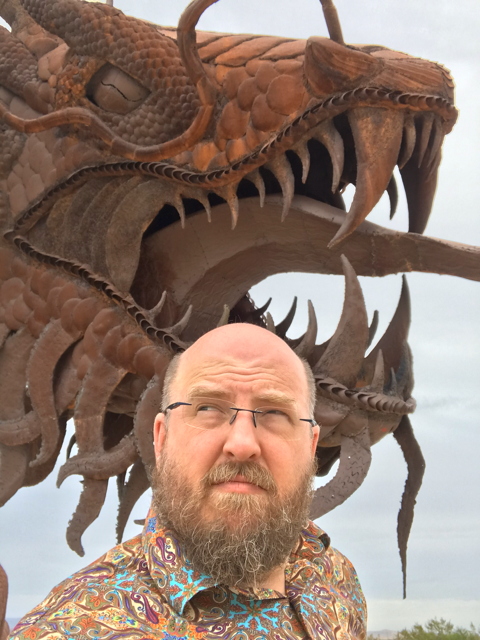 I am Lazarus Black, an author of fine fiction and non-fiction based in the Seattle area. I, my wife, and two children, manage a charcuterie of small pets at the edge of a forest. It hasn’t always been this way. Having lived in the Midwest, New York City, and Florida, and traveled frequently to Southern California for both work and pleasure, I strive to learn from and write stories about the breadth of human experience.

For more information please visit his website at: www.lazarus.black