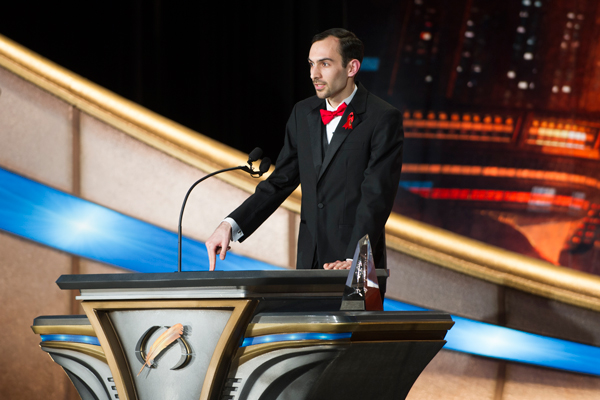 Michael T. Banker is one of our award-winning authors featured in the latest edition of L. Ron Hubbard Presents Writers of the Future Volume 31. He currently lives in New York City where he works as an actuary in a life insurance company. Subway rides into and out of Manhattan are generally spent either with his nose in a book or furiously scribbling down notes for a story.

Not a terribly interesting existence. But that’s the trick of stories, isn’t it? They allow people to live more than one life, and the memories created within them are often more poignant and present than real events. Michael wants to create those memories for other people. 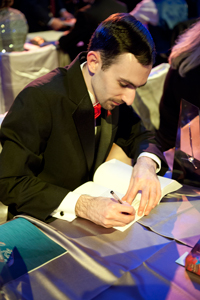 Michael signing books at the after-party for the awards ceremony

In his winning story, the concept is that one’s insecurities take on physical manifestations. As Michael puts it, “I came up with this idea a while ago and I don’t remember what prompted it. My ideas come from random places or nowhere at all. This was a fun one, though, and I ran with it.

“I knew right away that one of my characters would literally get heavy when depressed. Sometimes it’s difficult to sympathize with depressed characters in a story. You want to slap him and say ‘snap out of it!’ But a depressed character who literally gets heavy, who can be shown to physically struggle against the weight of his depression? It seemed to me that there was something there. This became my protagonist. Then I added two characters who disappeared because they were shy, another one who did just the opposite—she shut everyone else out, so that she literally couldn’t see or hear them. And finally a minor character who exploded into smoke when scared as a sort of defense mechanism.

“The last piece of the puzzle for me before this started to become a coherent story was who these characters were. I decided that the protagonist, an adult, was admitting himself into live-in counseling, which was inhabited by children. This was just enough catalyst for me to start asking myself questions about who and why and the plot began to take shape.”

What Michael didn’t realize is that his story would be the inspiration for the art that would win the grand prize—the Golden Brush Award. Michelle Lockamy of New Jersey, selected one pivotal point in the story to illustrate and it turned out to be the winner.

“I wanted my illustration to reflect, for me, the turning point of the story. The main character (Jason) feels a sense of weightlessness that he has never experienced before, and I thought that such a surreal and impactful scene needed to represent the story as a whole. The feeling of awe and wonder was what really helped inspire me, especially following the turmoils of the character beforehand. It was an awesome story to work with, and I’m so glad Michael was my writer.” 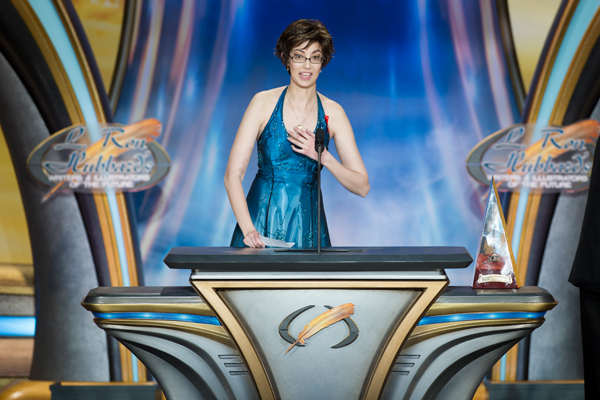 Michelle Lockamy on stage at the Wilshire Ebell Theatre in Los Angeles accepting her award.

You can see the acceptance speeches for Michael and Michelle here and Michelle’s Golden Brush Award speech here.

And to Michael and Michelle, we wish you all the best and