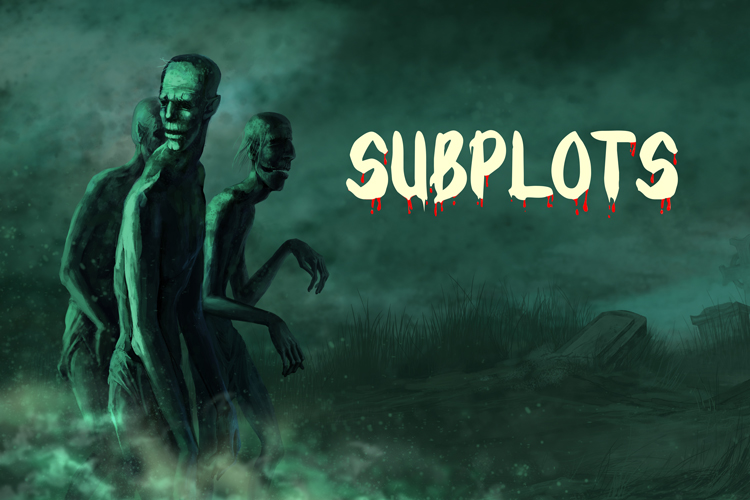 Very often when reading slush for the Writers of the Future contest, I come upon stories that at first glance seem to be perfectly acceptable. They presented a protagonist who had a problem to overcome. The setting was reasonably well defined. The story proceeded at a good pace, with the problem escalating nicely. Often there was a surprise twist at the ending, and the conclusion seemed appropriate. Yet when I got done reading the story, it just lacked … something. That “something” almost always turned out to be what in Hollywood we would call a B-line, a subplot that added to the overall narrative. Usually, this subplot has to do more with the character’s internal problems and growth than with the external problem.

Let me give you an example. Let’s say that we start a story where a movie producer discovers that zombies have taken over Hollywood. At first it’s a small problem—a couple of extras come to work on his latest horror movie, and they don’t need makeup! Yet the problem grows. Soon his film crew comes in trailing grave clothes. His lead star has his jaw fall off while reading his lines. The producer suddenly has a brilliant insight, “Zombies are in!” and so he changes his movie into a zombie film. As dumb as it sounds, this story could work as a comedy, at least on this A-line level.

Yet it needs something more. Perhaps there’s an internal conflict. The producer is sick of making B-rated horror movies. He feels like he is dying inside, getting hardening of the artistic arteries. He’s on the verge of giving up, and these problems are the last straw. But perhaps somewhere along the way, he has an insight. Perhaps, he realizes that dead people are attracted to his movies simply because they feel dead inside, too. So he decides to write for the zombie masses out there, and as he does, miraculously, he comes alive inside.

Now, that’s a corny B-story, but if handled right, it could work. More importantly, that growth arc is the real heart of your story. The story won’t work without it. So when I say that a story needs “multidimensionality,” I mean that you need to be consciously telling more than one story. Even in a short story, you might have several plot lines going at once.

In short, the emotions that a perfect story touches upon generally run across a spectrum, and in some instances are diametrically opposed.

Now, very often, people confuse multidimensionality with “complexity,” so new authors look for ways to complicate their stories—sometimes inappropriately. For example, one of my favorite stories is Nathaniel Hawthorne’s “Young Goodman Brown,” the tale of a man who goes to perform an unholy rite in the woods, accompanied by the devil, and meets many other fine people from his village along the way, including his wife, at the ceremony. He prays for God’s help for him and his wife, and awakes alone in the forest the next day, unsure whether it was all a dream or whether the events were real. He lives out the rest of his life as a cynical man, devoid of happiness, because of it.

Now, this is an “ambiguous” tale in some ways. Was the incident real? Was it a dream? In the long run, it doesn’t really matter. The story displays how one’s perceptions affect our lives, regardless of the truth. But many a new author, after reading this tale or one like it, becomes convinced that ambiguity is necessary to a tale. So the new author begins writing stories where with each tale, the reader is asked to try to figure out, “Just what the devil is going on?”

The truth is, the reader wants to feel that there is some meat in your story, that there is some depth to it. Creating a multidimensional story will do that. But withholding information so that the reader doesn’t know what is going on just complicates the story needlessly. In a similar way, authors often complicate their plots by adding one too many twists. So avoid using these cheats.

True depth comes as an author reveals observations about the world and about his or her characters that defy the common man. That depth, I think, is part of what I call multidimensionality. Very often, a story seems simple only on the surface.

The Fine Distinction Between Cooks and Chefs

Are We at the End of Science Fiction?
Scroll to top