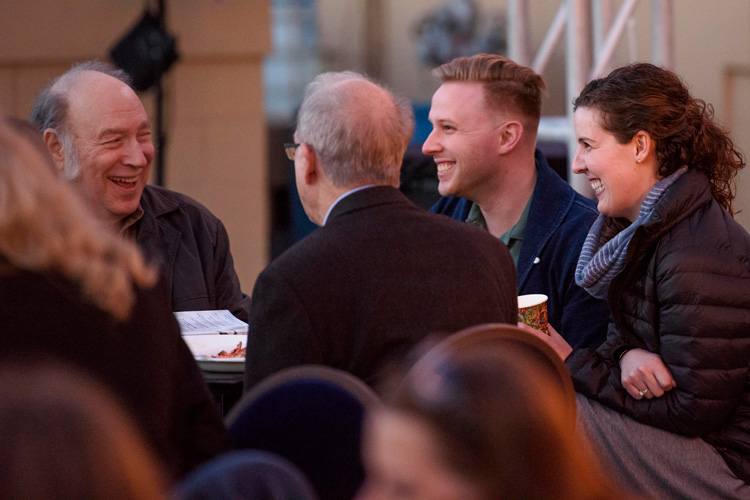 We recently had a chance to chat with Mike Resnick who was a guest speaker at the Writers Workshop and presenter for the 34th Annual Writers and Illustrators of the Future awards celebration here in Los Angeles.

Mike has been a full-time writer and editor for more than half a century. A prolific author, he has published 74 novels, over 260 stories, and 3 screenplays, not to mention being the editor of 42 anthologies. On top of that, he holds the distinction of being the all-time leading award winner, living or dead, for short fiction, a five-time Hugo winner (with a record 35 nominations), Nebula award winner plus a host of international awards.

Given his track record, and on behalf of struggling writers everywhere, we put forward the million-dollar question: How do you get the inspiration for your story ideas? His classic reply: “A pile of bills sitting on my table.”

Now, for anyone who knows Mike, you can appreciate both his candor and his sense of humor. Luckily for the writer winners who get to attend the exclusive yearly Writers Workshop, they are privy to much more from Mike as he explains. 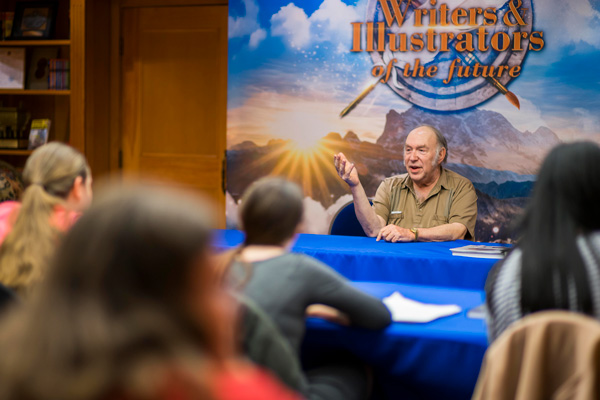 “I enjoyed Writers of the Future this year, as I always do. It’s encouraging to meet the next generation of writers, and to guess which ones will eventually emerge as superstars.

“I figured that most of the judges would speak about the art and craft of writing, so this year—as per usual—I spoke about the business end of it: contracts, foreign sales, agents, killer clauses, the whole nine yards. Got some startled and troubled expressions from the audience but hopefully, almost all their questions were answered by the time I was done.

“Another thing I enjoy about these WotF weekends is that every night we gather in the lobby or the bar, and answer dozens of more questions. And, of course, the ceremony itself is always a class act, and this year featured some truly remarkable magicians.

“I try to keep in touch with a number of each year’s WotF finalists. I’ve bought from a couple of dozen of them for my magazines and anthologies, and have even collaborated with a handful of them. It’s good to know where my successors are coming from.”

As a judge for the Writers of the Future Contest since 2010, Mike takes pride in helping the newly published authors featured in L. Ron Hubbard Presents Writers of the Future, get a leg up in the business. And this goes beyond just providing advice as Mike describes here:

Meet this year’s winners and the next generation of writers setting the trends with their diverse stories and visions here in L. Ron Hubbard Presents Writers of the Future Volume 34.