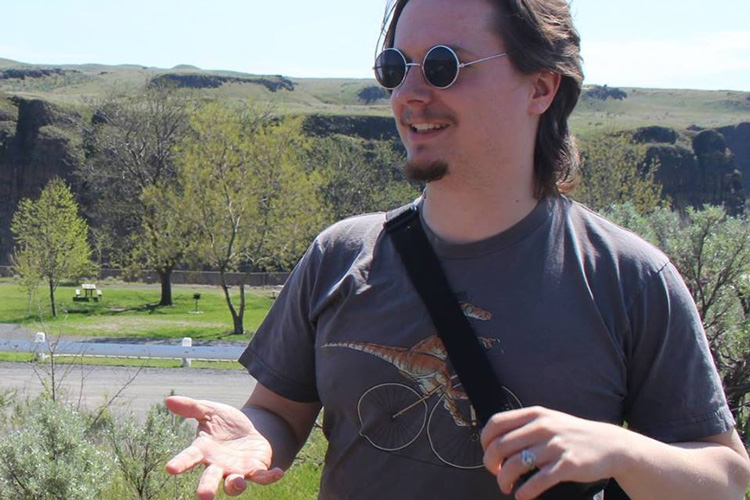 Hello there! A couple of years ago I decided to stop blogging in order to focus on improving my fiction, and, well, I just won Writers of the Future, so that seems to have worked. Given that, I figure its time to dust off the old blog and start posting weekly (or biweekly…or monthly…we’ll see…) updates again.

For now I’ve created a page listing all of my published short fiction, which you can visit here: jeremyteg.wordpress.com/stories. I have also uploaded “Her Silver Chains,” the flash fiction piece which was published in Lilac City Fairy Tales, an anthology series of Spokane area writers. There is a link on the “stories” page, for those of you who haven’t read that yet, along with a link to the Scablands Books store where you can buy a copy of that anthology, if you’d like. I finally picked up my contributor’s copy and there’s some great stuff in there!

This is a really big deal for me, not just because of the publication, the prize, and the workshop I’ll get to attend next April, but because it represents something of a book-end to the last four years of my writing life.

I first entered the Writers of the Future contest in 2013, during my junior year of college, full of the confidence and arrogance of a young man at the top of his class (I was also convinced, at the time, that I could get into an Ivy League PhD program straight out of undergrad at a regional liberal arts college…HAHAHAHAHAHAHAHAHA). I had read the most recent volume of the anthology, and thought my work stacked up. Of course, my taste at the time was not well developed enough to clearly discern the differences between the work I was doing and the significantly better written, tightly plotted, and well thought-out stories in the anthology.

Nevertheless, I got an Honorable Mention.

Rather than being disappointed, I was thrilled. Since submitting the story, I had learned just what the scope of the contest was. Thousands of writers submitted their work every quarter. Only the top 10-15% received Honorable Mentions. While I was not yet good enough to win the contest, clearly I was on the right track. That HM buoyed me through a hair-rendingly difficult final semester, through a dozen graduate school application rejections, and a dozen more rejected short story submissions. No, everything in my life was not going as well as I had thought, but I was on the right track with my writing, goddmmit!

I did not submit to Writers of the Future again until early 2015. Hannah and I had moved to Taiwan to teach English and were part of a great expat Writing Group. I decided to try sending one of my more recent stories off to Writers of the Future instead of condemning it to inevitable rejection from the slurry of magazines to which I had been making submissions.

It got a rejection. Which was a bit of a blow.

So did the next story I submitted.

How could I have gotten worse at writing over the course of a year and a half? I was in a writing group now! I was getting feedback!

I was pissed off, and determined to keep submitting until I won.

Thus began two years of submitting to WotF every single quarter, eight quarters in a row. It became something of a white whale for me. It also motivated an insane amount of productivity.

The first story I submitted after my two rejections got a Silver Honorable Mention, which, as I understand things, is essentially David Farland patting you on the back and saying “Soooooo close! But nooooooooot quite!” This threw a bucketful of lighter fluid on my already burning desire to win the damn contest. For the next few quarters I would write two or three short stories between quarterly deadlines, choosing my favorite and sending it off to the contest. I earned HMs and SHMs, never breaking into the hallowed ranks of the Semi-Finalists and Finalists, but always confident that I was right on the edge, that I was getting better.

I made my first professional short story sale to Beneath Ceaseless Skies, one of my favorite short fiction venues, in March. My first thought–after jumping up and down and squawking from excitement–was “Oh man, I better win Writers of the Future soon. It would be really annoying to pro-out without winning.” Not that I wouldn’t have been grateful to be disqualified from the contest by losing my amateur status, but winning the contest had become such a defining goal that losing the opportunity to achieve it would have left this whole endeavor feeling incomplete.

And then I won.

I can’t tell you anything about the winning story, though I personally think it’s the best thing I’ve ever written, and the story of its development is an interesting window into my process. Once the anthology comes out next April maybe I will write about that. Until then, you’ll just have to jitter and twitch in anticipation along with me.

For any aspiring SF/F writers out there, I cannot recommend Writers of the Future strongly enough. Not necessarily as a contest to win, at least not yet–I haven’t really experienced winning yet, in terms of the workshop, the networking opportunities, the publication, etc.–but certainly as a goal to strive for while developing your talents. Committing to entering a new story every quarter, or even every other quarter, will force you to produce, and that really is the most important thing you can do to develop your skills. It certainly helped me.

PS: the people over at the Writers of the Future forums, where I lurked for a year and a half while their registration system was defunct, are some of the kindest, most helpful, most supportive writers I have had the pleasure of interacting with–though most of that interaction has been sort of one-sided until recently. I highly recommend paying them a visit if you do decide to try your hand at the contest.

Jeremy A. TeGrotenhuis is a writer from Washington State and the First Place winner for Quarter 1 of Writers of the Future 2017. A student of History and Philosophy and a lifelong fan of Fantasy and Science Fiction, Jeremy writes at the intersection of these things. He aspires to someday create a novel as masterful as Ursula K. LeGuin’s “A Wizard of Earthsea.”

Other curious facts of note: Jeremy was home-schooled until the ninth grade, taught English for a year in Taiwan, and ruined his 4.0 college GPA with an A- in a freshman level class which he procrastinated taking until his last semester. He blogs at https://jeremyteg.wordpress.com and tweets at http://twitter.com/jeremyteg. To contact Jeremy, please send an email to jeremyteg@gmail.com.