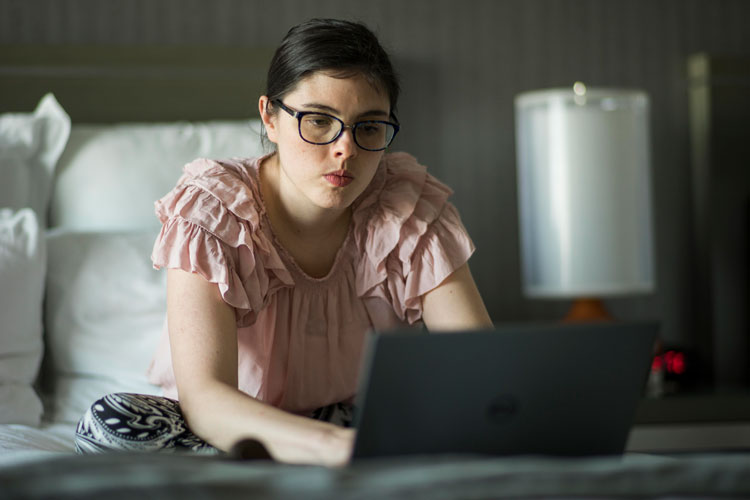 Amy Henrie Gillett hopes to kindle people’s hearts and minds by contributing a little light to a world that sometimes seems so dark. And so the story of how “All Light and Darkness”—published in L. Ron Hubbard Presents Writers of the Future Volume 34—came to be as told by Amy.

“All Light and Darkness” began as a final project for my college Creative Writing class. It was not speculative fiction originally and lacked much of the refinement the published version has (hopefully). However, the voice and format were there, as well as the plot.

When I first decided to pursue the L. Ron Hubbard Writers of the Future Contest, I recalled this piece, originally titled “Stay” and rewrote it to fit a science fiction world I’d begun building for a potential series. This world was conceived during a six-month period where I wanted to start a novel. I began that novel and soon found myself overwhelmed by my ambition and inability to meet my own expectations. That’s when I decided to turn to short story writing to improve my technique.

Originally, I treated short stories as a means to world-build, develop voice, invent characters and conflicts, and get my name out there in preparation for novel writing. However, to my surprise, I discovered a real passion for short story writing.

Short story writing demands development of plot and depth in a very small word count. It demands precision and eloquence, and I think it allows a flexibility of format and voice that novels don’t. A writer can use a very strange format or voice in a short story that readers would grow tired of in a novel. Not only that, but short stories seem to demand meaning–a reason to be read. I like to write poignant stories with layers of meaning in them, and I like those reflections to be the centerpieces of the stories and not a tangent. I write to inspire and change, and entertaining readers is the means by which I attempt that.

Novel writing requires more subtlety with themes and presents numerous thoughts and ideas throughout the story, and it demands much greater attention to entertainment.

I have fifteen drafts of “All Light and Darkness” saved to my computer and a few other drafts in hard copy. Any time I made a major change to my manuscript, particularly if I removed any content, I made a new file. I submitted to the competition for the first time at around Draft 8. The story was over 16,000 words long, and I expected a win–thought I was the best thing since Bradbury.

I received a flat rejection.

For those of you unfamiliar with the competition, a rejection means that, in all likelihood, the story wasn’t read all the way through. David Farland tried a draft or two then said, nope.

I told myself I must have been rejected because of word count. Anyone could see it was a massive piece, and I thought there was no way it would have been rejected if it’d been read all the way through. So, I cut it down to 14,000 words and submitted again.

My ego in shambles, I decided I should probably learn how to do this short story thing correctly. I started stalking the Writers of the Future forum, signed up for David Farland’s “Story Doctor” weekly writing tips, and scoured the internet for short story advice. Then I hitched up my pants and submitted what was then “Stay” to Critters.org.

In the meantime, I wrote a new story and submitted it to the competition. Another rejection.

The Critters Community did a fantastic job on “Stay.” Not only did I get some very positive feedback, I also received respectful, but firm, recommendations on changes. I accepted many of those recommendations, and thus began the heartbreaking process of their execution. They say if you don’t bleed over your words, you’re not doing it right. Well, I bled.
I went through each critique line by line and wrote up a list of the suggestions I agreed with or wanted to try out. The list filled a whole page of college ruled paper. Sometimes you have to swallow your preconceptions, try out the changes, let it sit, and then decide whether they’re a win.

In the end, I changed the entire first scene, beefed up the climax, cut out a middle scene, and deleted the last 1000 words. Oh, and gave my character a new power. And got rid of a cast of minor characters. And toned down my purple prose…. And changed the title.

I didn’t take every recommendation, but man, those people really knew what they were talking about. After I made the edits (the hardest was removing that middle scene and deleting the last 1000 words), I was so excited by the final product that I submitted three days early. It just felt right. It was about 11,000 words long and had a different focus from the previous versions. I expected at least a semi-finalist slot.

I’m hoping that in time, I can do a first draft followed by a proofread, send it to a critique group, write a second draft, read it out loud, make hopefully only minor corrections, finalize the manuscript and send it out. I want to take that year and whittle it down to a month. There will hopefully be several other stories written in the world of “All Light and Darkness”–not to mention a few novels–so I don’t have a year to write each one. Regardless, if I learn as much with each new story as I did with “All Light and Darkness,” then maybe someday I will become a Bradbury. 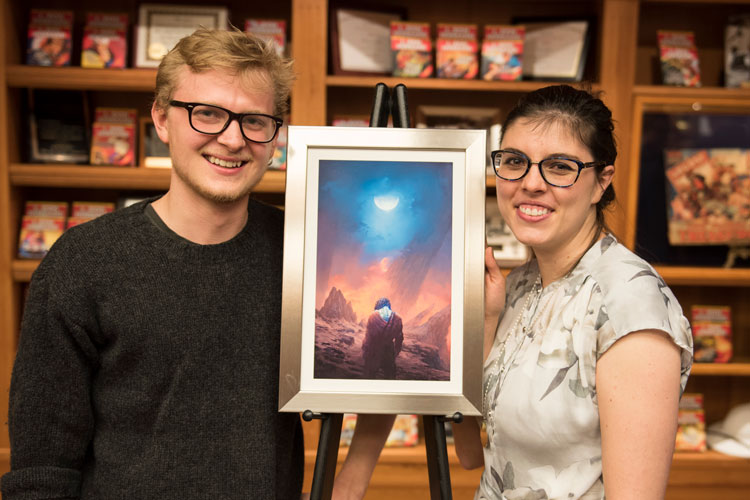 Duncan Halleck is an illustrator and concept artist working in the entertainment industry, specializing in science fiction and fantasy. In the following video, Duncan explains how he painted his image for “All Light and Darkness.”

Read “All Light and Darkness” in Writers of the Future Volume 34 and let a little light into your world.

Another article you may be interested in: Is the world ending?

Illustrators of the Future 1st Quarter Winners Announced for Volume 35