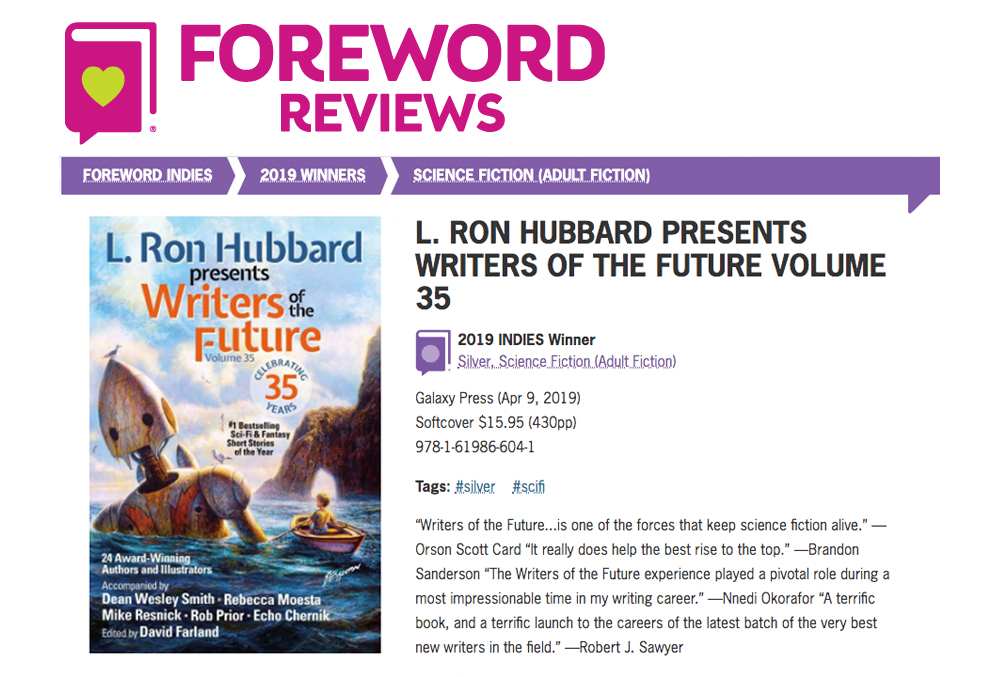 Galaxy Press is pleased to announce L. Ron Hubbard Presents Writers of the Future Volume 35 has been named a Silver winner in the Science Fiction category for the 21st annual Foreword INDIES Book of the Year Awards.

Foreword Reviews, a book review journal focusing on independently published books, has announced the winners of its INDIES Book of the Year Awards. The INDIES recognize the best books published in 2019 from small, indie, and university presses, as well as self-published authors. You can view all of the award winning titles here.

“For a couple of months a year, our editorial team gathers together for the collaborative work of reading through the thousands of worthy INDIES submissions we receive, whittling categories down to the few books that best represent the spirit and potential of independent publishing,” says Managing Editor Michelle Anne Schingler. “The task of judging books is never easy—our impulse, as readers, is to embrace all titles—but it’s work that we take seriously, as do the librarians and booksellers who further narrow the categories after us.

“The end result is short lists of winners that represent the best of the best—independent titles that you absolutely should not miss. In these troubled times of tremendous change, we hope that you’ll find these selections inspiring—a reminder of what we’re all working toward together.”

President Galaxy Press John Goodwin stated, “What an honor this is and a great acknowledgment to the new authors published in L. Ron Hubbard Presents Writers of the Future Volume 35. The Foreword Reviews INDIES Book of the Year Award will be displayed with the Benjamin Franklin Gold Award, Critters Annual Reader’s Poll, and the NYC Big Book Award—all for Volume 35, making this the most award winning Writers of the Future book. I am so proud of the new featured authors and very thankful to L. Ron Hubbard for starting the Writers of the Future, enabling their dreams to come true.”

Over 2,100 entries were submitted in 55 categories, with Foreword’s editors choosing approximately 9 finalists per genre. Those finalists were then mailed to individual librarians and booksellers charged with picking the Gold, Silver, Bronze, and Honorable Mention winners.

For more information on the Writers of the Future Volume 35, go to Amazon.com.

Writers and Illustrators of the Future Announces a Combined Event with the 36th...