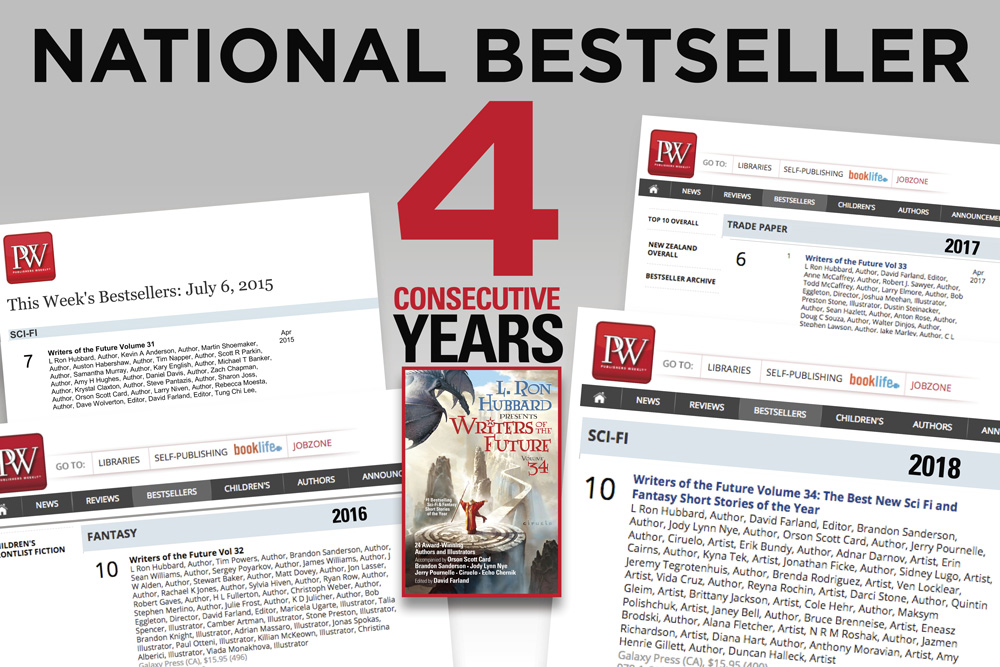 Nearly 100 aspiring writers and artists have realized a major accomplishment over the past 4 years as winners in the Writers & Illustrators of the Future Contests — when the book they were published in, L. Ron Hubbard Presents Writers of the Future, became a national bestseller.

The number of new books published annually is now over 1 million (data provided by Bowker) with more than 2/3rds being self-published. Yet the number of book outlets in the US has dropped significantly, from 38,539 in 2004 to 22,586 in 2018. Unfortunately, the average new book will sell less than 250 copies in the first year and less than 1% have a chance of being stocked in a bookstore.

Writers of the Future Provides Hope

At a time when getting a much-needed break as a writer seems next to impossible, having a contest such as Writers & Illustrators of the Future becomes all the more vital. In fact, a review of the previous 33 years found that out of 472 past writer winners and published finalists, 336 have gone on with their writing career, publishing at least one story. And 192 continue to write and be published—that is, over 40% who are still realizing their dreams as a writer. 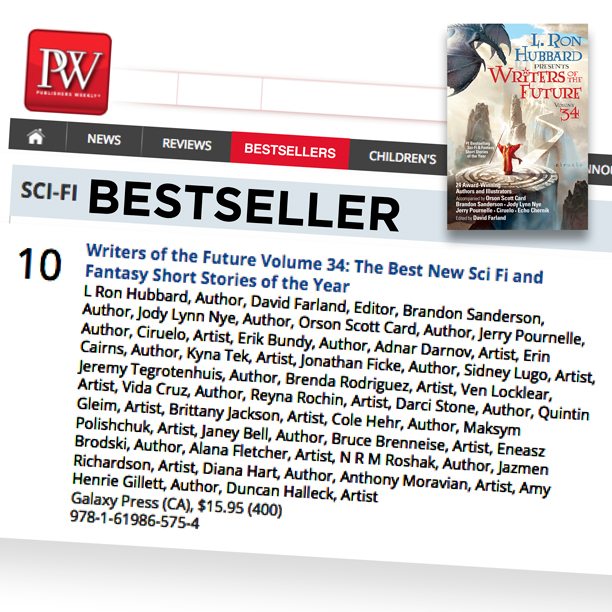 Writers of the Future 34 Now a National Bestseller

In keeping with the Contests’ aim to give new writers and artists a leg-up on their careers, this past week L. Ron Hubbard Presents Writers of the Future Volume 34, became a national bestseller, hitting the #10 spot on the Publishers Weekly Science Fiction bestseller list. This is the fourth Writers of the Future volume in a row to achieve national bestselling status—a fitting accolade for this year’s winners!

Volume 34, released in April, is a compilation of 12 top sci-fi and fantasy short stories written by 12 winners of the Writers of the Future Contest and illustrated by the 12 Illustrators of the Future Contest winners. While contest entries span over 170 countries, winners this year hailed from 9 different countries and include Belgium, Canada, Mexico, the Philippines, South Africa, Thailand, Ukraine, Venezuela, as well as the United States.

Also included in Volume 34 are short stories written by New York Times bestselling authors and Writers of the Future contest judges, Brandon Sanderson and Jody Lynn Nye along with a fantasy short story by contest founder, L. Ron Hubbard. The cover art was created by internationally acclaimed artist and Illustrators of the Future judge, Ciruelo.

Discover why these are the best new voices in speculative fiction by reading their stories and seeing their art in L. Ron Hubbard Presents Writers of the Future Volume 34.