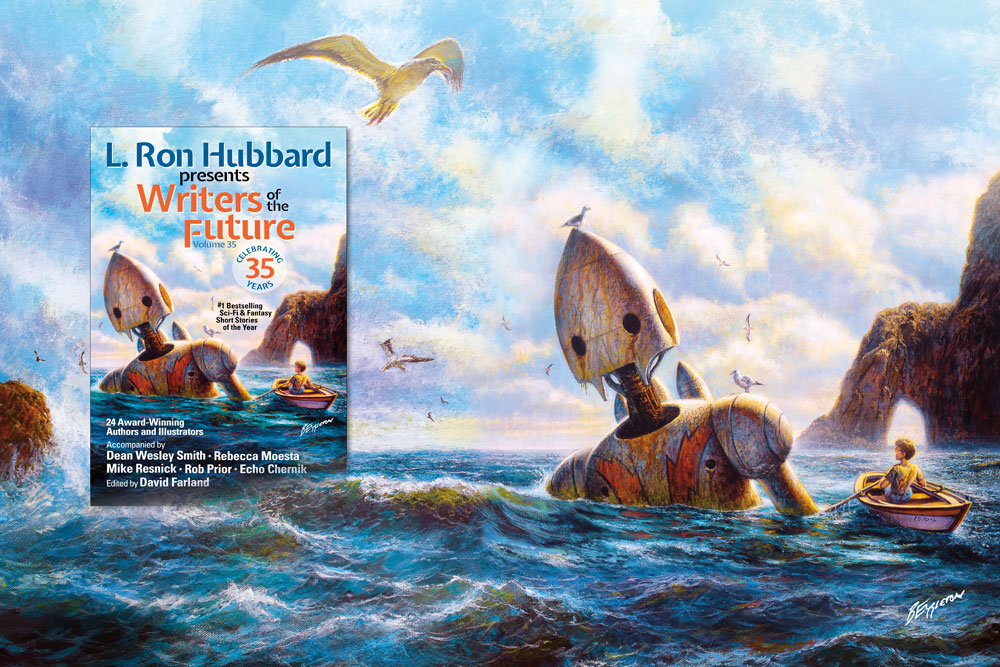 Hollywood, CA—Mark your calendar to watch the Writers and Illustrators of the Future Achievement Awards Ceremony Friday, April 5, 7:30 PM (Pacific)

The L. Ron Hubbard Achievement Awards ceremony, celebrating its 35th anniversary of the internationally-acclaimed Writers of the Future Contest and its companion Illustrators of the Future Contest, will be broadcast on Friday, April 5, 7:30 PM (Pacific), to a worldwide audience via the Internet, it was announced today. Streaming will be live from www.writersofthefuture.com where a countdown to the event can currently be seen.

Themed around the book cover art entitled “One of Our Robots Is Missing” painted by award-winning artist Bob Eggleton, the opening act will be performed by EMCirque and a Mars Rover prototype.

The evening ceremony will be held before a packed hall of invited guests, celebrities, and many of speculative fiction’s most popular writers and illustrators at The Taglyan Complex in Los Angeles, all gathered to find out who will win the Writers of the Future Golden Pen award and a $5,000 check and the Illustrators of the Future Golden Brush award and their $5,000 check.

“You could call the Writers of the Future Contest ‘The American Idol for Writers’—long before there ever was an American Idol,” said USA Today and New York Times best-selling author and Contest judge Kevin J. Anderson (Dune prequels, Saga of Seven Suns, Star Wars). “It’s amazing to me that a good 60 to 70 percent of the winners go on with successful careers in writing, and several have become best-selling authors themselves.”

“This annual gala ceremony for new writers and illustrators of science fiction and fantasy is such a moving experience that we want all speculative fiction fans everywhere and the friends and families of this year’s winners to witness it,” said Joni Labaqui, the Contests’ director.

Every quarter, three writers and three illustrators are selected by a panel of leading authors and artists of science fiction and fantasy. With no entry fee and judging done on an anonymous basis, the criterion is strictly merit. Beside first time publication, benefits include over $30,000 in cash prizes and royalties, a week-long workshop with top professionals of the genre as well as book signings, radio, and TV interviews organized by the contest administrators to assist the winners in launching their careers.

Please note, this is a live broadcast, so check your time zone for when it will show in your location. You can follow the live countdown to the achievement awards at www.writersofthefuture.com.

For more information, on the Contests, go to www.writersofthefuture.com/writers-contest-info.

The Sport of Writing by Nnedi Okorafor