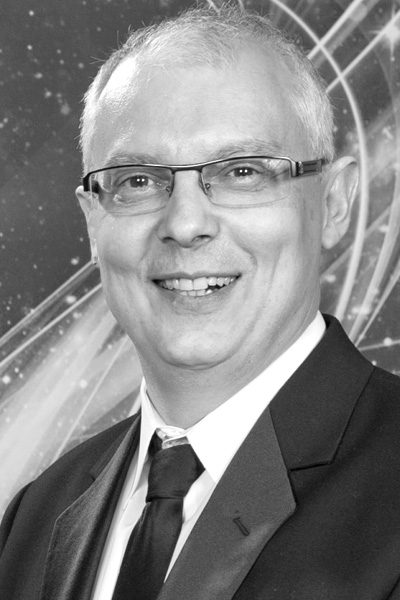 Stephan Martiniere is an acclaimed multi award-winning science fiction and fantasy artist. In 2012 Martiniere was voted one of the 50 Most Inspirational Artists by Imagine FX Magazine. A graduate of a prestigious art school in Paris, Martiniere’s thirty-year career is impressive in its scope. His early career ranged from conceptual design work for everything from theme parks, television, and animation. For the last twenty years Martiniere has focused on digital paintings for book covers, digital art and concept art for major motion pictures as well as artistic design and direction for computer games including Rage, Stranglehold, Uru: Ages Beyond Myst, Myst: The Path of the Shell and Myst 5.

Stephan Martiniere has worked on movies such as The Suicide Squad, Independence Day: Resurgence, Tomorrowland, Avengers: Age of Ultron, Guardians of the Galaxy, 300: Rise of an Empire, Total Recall (2012), I, Robot, Tron: Legacy, Star Wars Episodes 2 and 3, Knowing, Virus, Red Planet, The Time Machine, The Fifth Element and the upcoming Ready Player One, Alita: Battle Angel, Aquaman and Venom.

Martiniere has produced over 150 book covers and numerous comic book covers and editorial illustrations for such clients as The National Geographic, Popular Science, Tor Books, Pyr, Penguin and Random House, Dark Horse and Radical Comics. Martiniere has also worked extensively with Disney Imagineering on Disneyland parks and expansions across the globe doing visual development for The Pirates of the Caribbean’s, Avatar and Star Wars.

As a director for the TV animated specials Madeline, Stephan received the A.C.T Award, the Parent’s Choice Award, the Humanitas Award and was nominated for an Emmy Award. As an illustrator, Stephan is the recipient of several “Spectrum” and Expose Awards and the Into The Pixel Award. In 2004 Stephan received the Expose Grand Master Award. He also won the Thea award for his work on the paramount theme park “super saturator” and for his work in the book cover industry, he received the British Science Fiction Award, the Chesley Award, and the Hugo Award.

Stephan Martiniere is currently a visual consultant and freelance concept illustrator for various films, games and theme parks and frequently teaches workshops and presents lectures worldwide. He is an advisory board member of the CG Society.

He has been an Illustrators of the Future judge since 2007.

Find out more at: www.martiniere.com