Forums
Forum
Publishing: The Bus...
Tout your Kindle an...

Tout your Kindle and E-Publishing!

I've also got two electronic novelettes up and for sale on the Kindle...

A gritty, somewhat foul-mouthed crime/hardboiled novelette, set in the Pacific Northwest and featuring a couple of ex-Army guys doing a dirty job for a Seattle crime boss. Very much in the vein of, "The Usual Suspects" or "Things To Do In Denver When You're Dead."

Another novelette, which will be the first in a series featuring this character. Rather pulpy by design, it's a wet, somewhat sexy murder-crime story in a futuristic super-city where former pleasure femmebot Camarro Jones -- now a Special Detective for the ESBT Metro police -- must crack a serial killer mystery.

I love that name for an ex-pleasure femmbot. Camarro Jones. :Approval Stamp:

I'm not the publisher of this one, but it's the publisher's grand e-book experiment, and "Too Close for Comfort" is in it:

Also available for Nook and on Smashwords (and, by extrapolation, in the iBookstore).

There are some quite good stories included. I enjoyed the majority of them, and I'm a fussy reader.

I've got a few things up. I'll just post the covers and a link or this post would get huge

All my e-pub stuff can be found here: http://overactive.wordpress.com/read-my-fiction/

Here are some covers for your eyes 😉

I recommend Brad's story Blood and Mirrors and Annie's The Light of the Earth as Seen From Tartarus. Both great reads. Big thumbs up.

Here's my author page on Amazon. Probably the easiest way to link my stories.

And a sample of the covers (The Digital Sea is a novel):

I have six items up.

You can find them here with Smashwords, Amazon and B & N links:

OK, one pretty picture then. My latest SF/romance-y book Watcher's Web has a cover image done by IOTF winner Nico Photos (whom I found through the illustrators thread which has becomeburied recently).

These are some excellent covers, everyone! Excellent.

Just posted one on Smashwords. Nook and Kindle will follow soon.

Just posted one on Smashwords. Nook and Kindle will follow soon.

Good stuff everyone! Here are a couple that I have up on Smashwords.

I have a short story up on Smashwords for free (for a while at least, probably won't be free forever). It's fantasy:

I also, if it's okay to post this here, am running a Kickstarter project to help pay for Clarion. You can get a free book out of it for donating or, if you don't feel you can contribute, tweeting the link would be super helpful. Here's the project: http://www.kickstarter.com/projects/ann ... ten-at-cla
Thanks

Patty, Nicos did some amazing work. I didn't realize your cover image above is also on his business card. Stunning.

I have a new novelette up on Amazon and Smashwords (and B&N shortly)for $0.99:

This story was an HM from Q4 2010. I was really hopeful for it, but I believe it had a tad too much horror to go the distance. My guess anyway. I'm still very proud of it. My favorite short story that I've written.

Things are very busy around here. I have another novel to announce - Gamers. It's a YA speculative fiction novel.

“Two points for brushing your teeth. Ten points for keeping your room tidy. Seventy-two points for the Bioeconomic Game Design pop quiz on the ride to school in your personal FunCar. Another thirty for making every hurdle in gym class.

Life is a game, unless you’re not the one winning.

When Gabby DeCorte, top student and reality-hacker extraordinaire, learns the truth about LifeGame, she must choose between winning and what she believes in.”

And in mid-June Gamers will be available in paperback for $13.99.

I got to read Gamers for a workshop. It's awesome. Seriously.

I got to read Gamers for a workshop. It's awesome. Seriously.

Ah, I was sure there was a kind of pimp-your-ebook thread on this forum. I seem to have found it.

I'm on a mission to get more reviews on Amazon/Smashwords/goodreads, and have temporarily dropped the price of all my ebooks to 99 cents. No, if you grab a book, you don't *have* to review, but I figured more readers = more reviews.

Anyway, here's the link to my author page:

Here's my newest release, Fires of Alexandria, a historical fiction novel about the greatest inventor of the ancient world investigating its greatest mystery--the tragic fire of the Great Library. 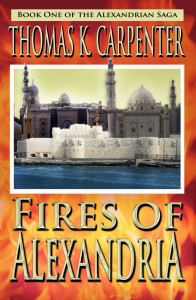 The greatest mystery of the ancient world remains the identity of who set fire to the Great Library in Alexandria.

One hundred years later, Heron of Alexandria—the city’s most renown inventor and creator of Temple miracles—receives coin from a mysterious patron to investigate the crime. Desperate to be free of the debts incurred by her twin brother, she accepts and sets in motion a chain of events that will shake the Roman Empire and change the course of history forever.

I'm also running a contest on Twitter giving away free paperback copies of the novel. Go to my website for more details.

Thomas, that looks fascinating! I like the idea of ancient detective stories. Is it an alternate history, or more of a lost history?

Thomas, that looks fascinating! I like the idea of ancient detective stories. Is it an alternate history, or more of a lost history?

Thanks! It's rooted in history, but I diverge, so yes, it's an alternate history novel. I go into that aspect on my blog:

Here's a sample of my gushing fanboy prose for an inventor dead two thousand years.

...When I first came upon Heron of Alexandria, a noted inventor and scientist of his time, I was flat blown away. This guy was inventing stuff that was crazy advanced. Then after a little more research I found it wasn’t even the tip of the iceberg. The whole time period around the BC to AD switch was rife with mind blowing inventions, all centered around Alexandria and its Great Library. I knew right then and there, I would write a book about Heron and Alexandria and all the wickedly amazing things that happened then...

I'm not generally a fan of alt-history. I've never understood the fascination (whereas lost history kinda appeals to me). But I'll check this out.

Your comments on Heron remind me of a recent discovery I made. I was researching proper motion for my WIP, and I learned that the pioneer of proper motion calculation was Edmond Halley, he of the comet fame. Then I researched farther, and was stunned at how many fields he contributed to -- far more than his friend and contemporary, Isaac Newton. He was even the one who encouraged Newton to publish the calculus (let's not get into the Newton/Leibniz debate here, please, I'm on a separate tack), and he was the publisher for it. Yet today, Newton is the one more commonly known; and aside from a comet, few people have ever heard of Halley.

When I read that, I made a note for a story idea. Nothing specific, just "A story involving the incredible Edmond Halley." So I understand where you're coming from here.

I've got to agree, this sounds like a fascinating subject for a novel, Thomas. Though I admit I'm not into the alt history thing either. Actually, I can't think of an alt history I've ever read. I've got a history/politics degree so maybe that has something to do with it.

Actually, I wouldn't mind writing a historical novel... But I'm dead scared of the research!

I've got to agree, this sounds like a fascinating subject for a novel, Thomas. Though I admit I'm not into the alt history thing either. Actually, I can't think of an alt history I've ever read. I've got a history/politics degree so maybe that has something to do with it.

Actually, I wouldn't mind writing a historical novel... But I'm dead scared of the research!

I didn't mind the research because the subject was so fascinating. Mostly I felt like I was a discoverer in a new land and often had the thought, "Why didn't I learn about this stuff in school?" The answer is that the fires in the library wiped out much of the history of that time, which makes it a prime subject for alt-history. Only recently has a lot of the information from that time come to light.

For example, it's now known that Copernicus was not the first person to discover that the earth went around the sun. The original discoverer was Aristarchus of Samos around 300BC. It's theorized that Copernicus actually found old documents that led him to rediscover this ancient knowledge.

There are all sorts of other bizarre and interesting facts from the time. Like I said, doing the research wasn't hard because the reading was enlightening. And while I used many of the items from my research for Fires, there's so much left over I have plenty to play with for the following novels (which is also why it's book one of the Alexandrian Saga.)

(I want to have an image here, but can't find a way to re-size it without the image taking up the entire page, and without re-sizing manually and uploading a small image someone on the web)

At some stage, people wanted to see stories that received HMs?

This is one, although I have adapted the story a little since it earned my first-ever HM in 2009.

A novellette, published originally in Martian Wave. While diving in the methane lakes on Titan's south pole, Hadie's fiancee is struck by mysterious 'lightning' from a glass sphere. Hadie, a construct, artificial human, battles prejudice and hostility to help him recover, and discovers the truth behind the spheres.

It's part of a wider universe I've used for other stories, including His Name In Lights (Universe Annex Grantville Gazette), Trassi udang (Belong anthology) and Poor Man's Travel (Anywhere But Earth anthology, tbp, incidentally, the latter also received a HM)

Just purchased a copy, Patty. Thanks!

I think self-publishing makes a lot of sense for a story that comes close in the contest. I'm really hoping Analog buys my Finalist story, naturally; but if they don't, I'll try F&SF. If I can't land it there, then it's going to Kindle direct.

If [market that shall remain unnamed but which takes months to respond to submissions] doesn't want my non-winning finalist, that story will also go up.

Heh. I can't imagine which market that would be... Unless it's the market which sat on my favorite story for so long, I wondered if they had lost it.