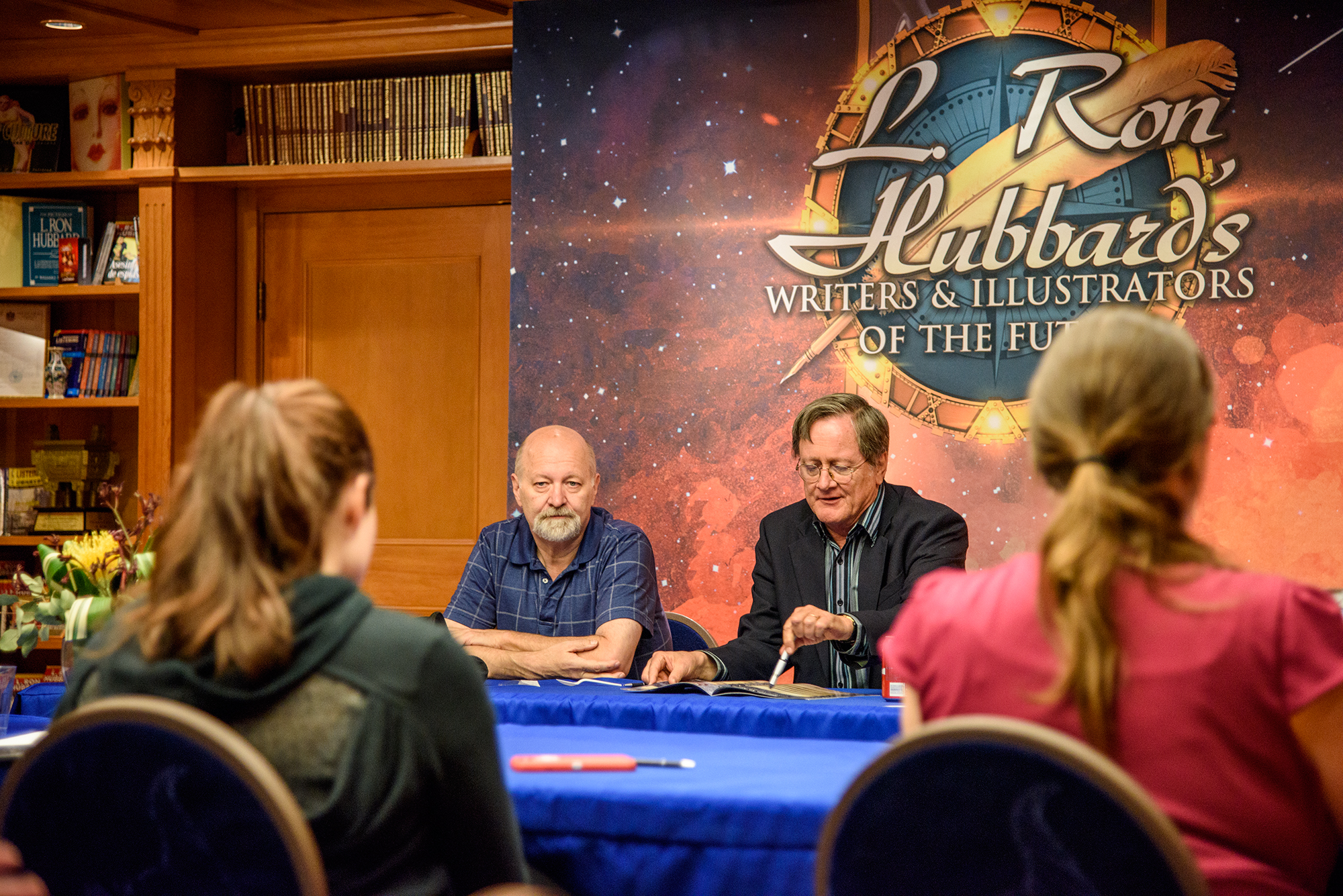 Workshop day five began with the writers gathering to critique the three 24-hour stories that they read the night before. Tim and Dave kicked everyone out who wasn’t a writer-winner to make sure the environment was as non-intimidating as possible. Once the critiques were through, the writers received a quick run-down on agents, and then broke for lunch.

When they reconvened, they were treated to guest lecturers throughout the evening. First up was Liza Trombi from Locus Magazine, the foremost professional publication in science fiction and fantasy literature. She discussed Locus, and then moved on to the vagaries of self-publishing, traditional publishing, and going hybrid. Liza recommended trying traditional publishing before attempting self-publishing. She also mentioned that publishing your first novel is rare, and that the best thing you can do for your future writing career is to always be writing a new book.

Robert J. Sawyer was up after Liza. With fresh copies of Locus in the winner’s hands, Robert took the opportunity to point out that his latest book, while having been well reviewed by Publisher’s Weekly and the Washington Post, was disliked by Locus. And while the book is doing extremely well, the reality is that someone will always dislike your work. He stressed that you should never write to please everyone because you never will. Your job, he says, is to identify what it is you do. You should know what your brand is as a writer, and write to please those people.

Robert recommended writing a review of your own work, just for you, that you can use as a guide while drafting. In doing this, you decide ahead of time how you want the book to be received, and can adjust as you draft and revise based on your focused goals.

Orson Scott Card then took the stage. He began his presentation by addressing the importance of taking care of one’s health as a writer. “Your health makes writing possible,” he said. Scott then segued into issues of point of view, penetration, and tense. He ran over all the positive and negative aspects to consider of each, and stressed the importance of selecting each with care to fit the story you want to tell.

Scott then made the writers do an exercise, wherein they wrote a past tense, limited third person narrative about an hour of their lives. Rachel K. Jones, Krystal Claxton, K.D. Julicher braved Scott’s live critique and read their work aloud. Based on their stories, Scott offered advice about reading aloud and handling viewpoint.

Once Scott was finished, Kevin J. Anderson and Rebecca Moesta offered advice on how to be professional. They began their presentation with the excellent advice that a writer’s best business card is their book, and then proceeded to hand out a copy of Kevin’s latest novel. They ran through Heinlein’s rules of writing, including: you must write, and you must finish what you write.

Rebecca and Kevin’s rule number one of being a professional was to, “Never, ever, never, never, ever, be a jerk to anyone at any time.” They spoke about presenting yourself professionally in public, and making certain to always meet your deadlines.

After the guest lecturers were finished, the writers and judges moved to another room in Author Services where, for many of them, their first ever signing had been set up. The writers and illustrators settled in to sign a mountainous pile of books. Nursing well-earned hand cramps, they moved on to a local restaurant for a group BBQ. Full of delicious food, they hurried back to the hotel to have their last tuxedo and dress fitting before the big event.

Day 4 – Illustrators of the Future Workshop

Day 4 of the illustrator workshops began with a two part presentation by past grand prize illustration winner of Vol 27, Irvin Rodriguez. Irvin currently lives and works in New York City where he has functioned as an illustrator for the last 5 years in the mobile and social gaming industries, comics, book covers, editorial illustration as well as showing his paintings in galleries. The first talk covered the early parts of his illustration career, his progression from illustration to fine arts, his interest in becoming a professional painter and balancing a mix of both careers. The second part covered resources for the artist and illustrator including marketing strategies, podcasts, educational websites, art interviews and recommended books and reading for artists.

Larry Elmore gave his seminar in the afternoon session. Larry is a well known fantasy artist who has worked on Dungeons and Dragons, Dragonlance, fantasy book covers and many commissioned projects. Larry discussed his humble beginnings in rural Kentucky and how it shaped his work ethic. He also discussed some of the painting and image making techniques he employs, from glazing, scumbling, graphite and charcoal drawing and the importance of line weight. Larry currently focuses on commissions and personal paintings.

The workshop instructors gave a critique in the afternoon for the illustrator winners book cover sketch assignment. They covered picture making essentials like composition, value, typography, cover titles, and thumbnail sketches. It’s important to consider the pose, gesture, scale and placement of the elements to enhance the delivery of a message in an illustration or picture.

Bob Ciano was the last presenter of the day. Bob Ciano has been art director of many publications, including Life, the New York Times, Esquire, Travel & Leisure, Encyclopedia Britannica, The Industry Standard, Forbes ASAP, and Opera News. Along the way he has worked with prominent illustrators, photographers, and writers and has won over 300 design awards. Bob stressed the importance of typography and design and its relationship with illustration and photography. Illustrators must take precautions while composing their pictures so that the image and type work effectively as a whole. 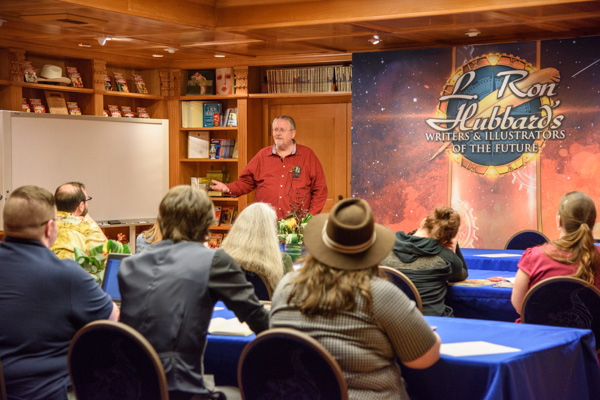 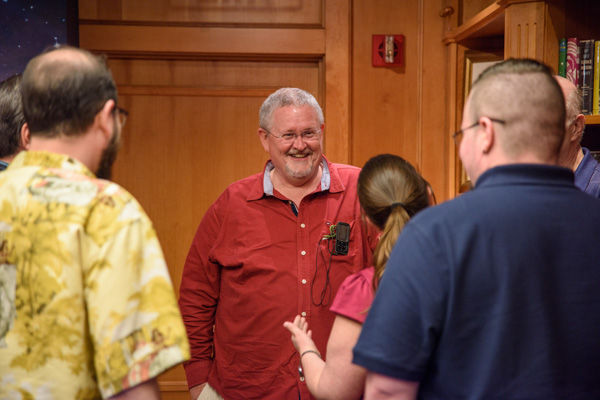 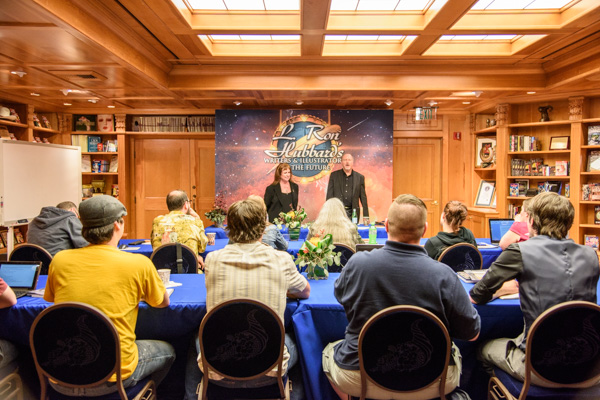 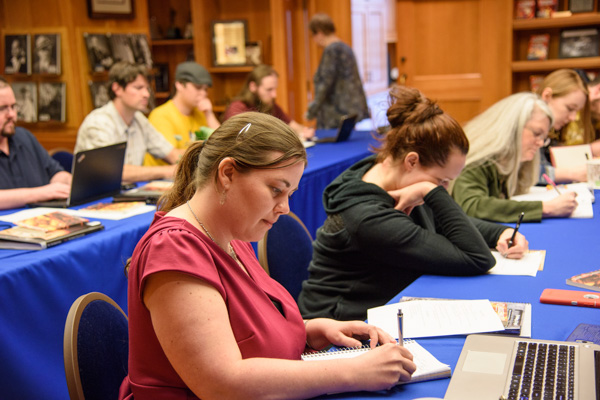 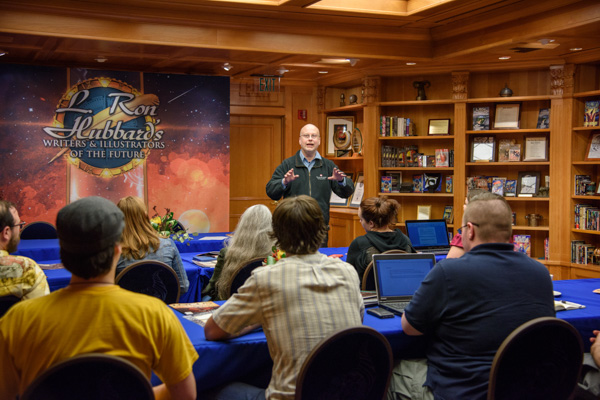 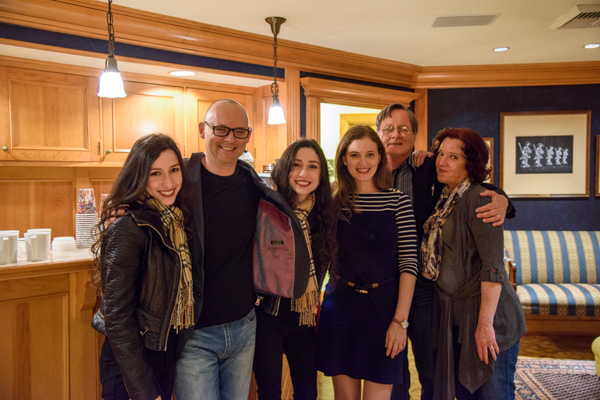 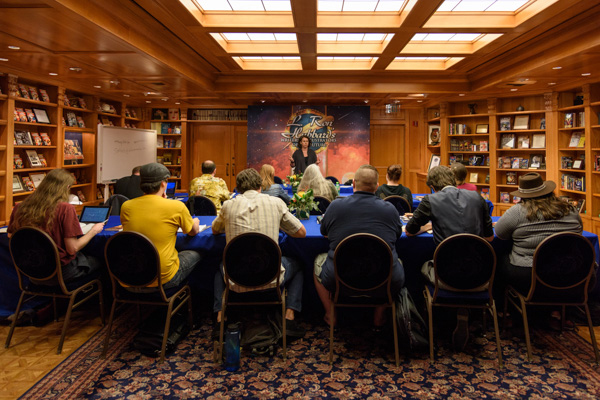 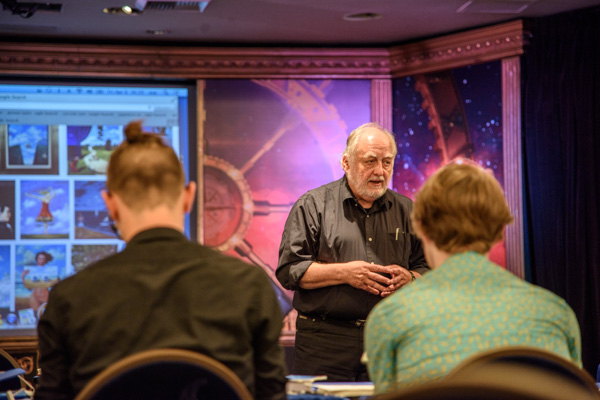 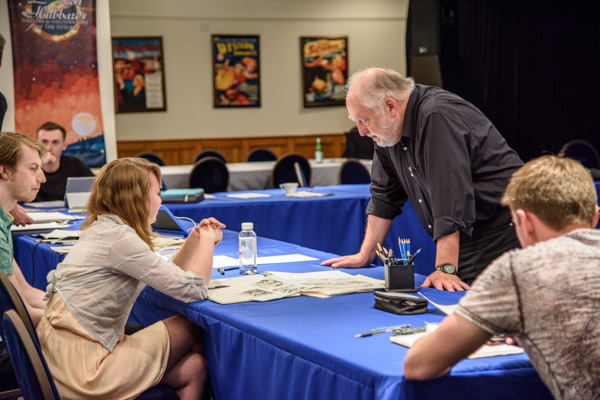 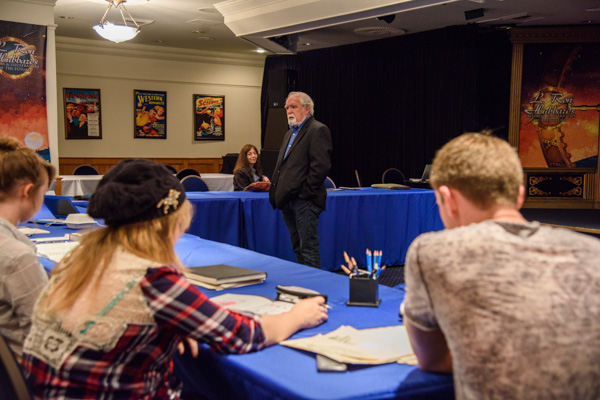 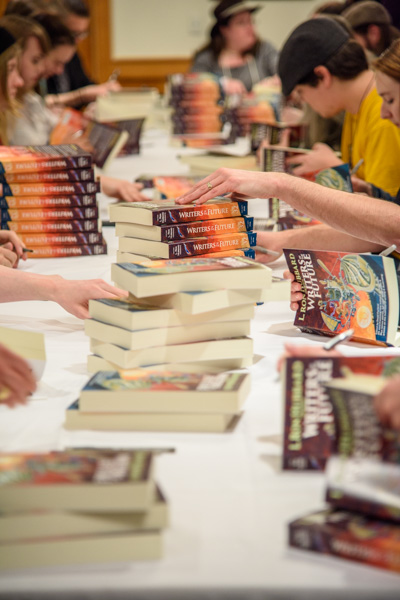 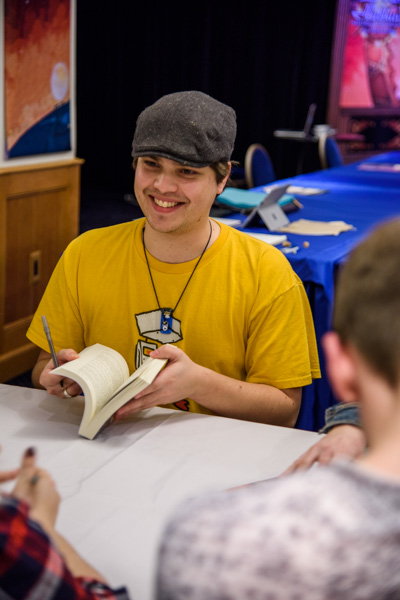 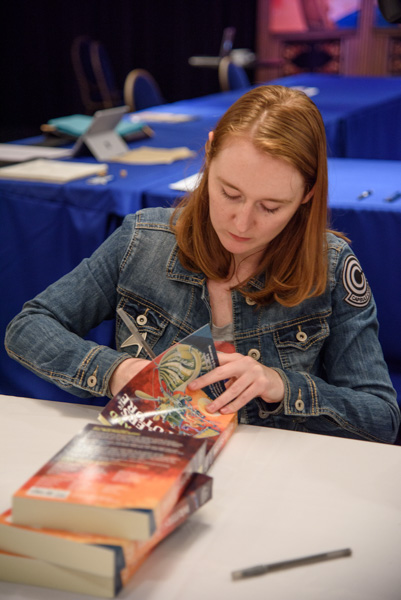 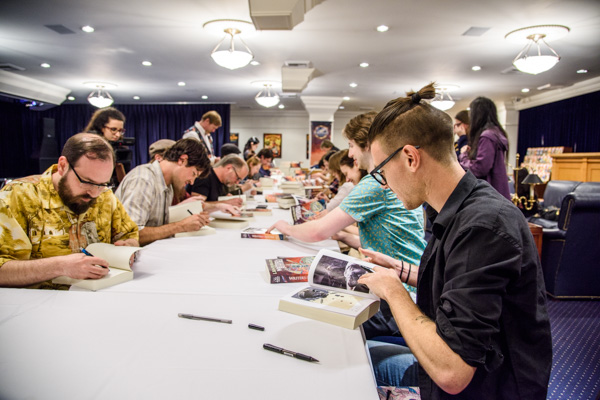 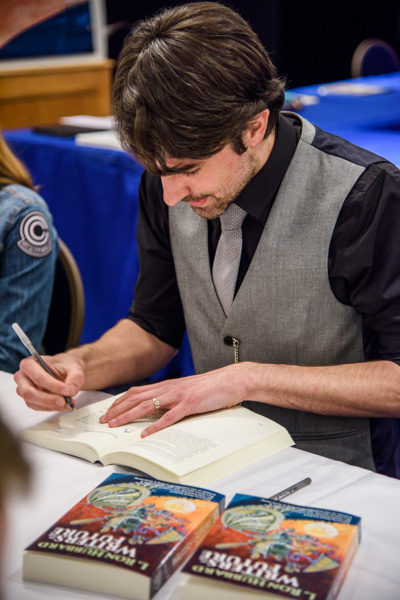 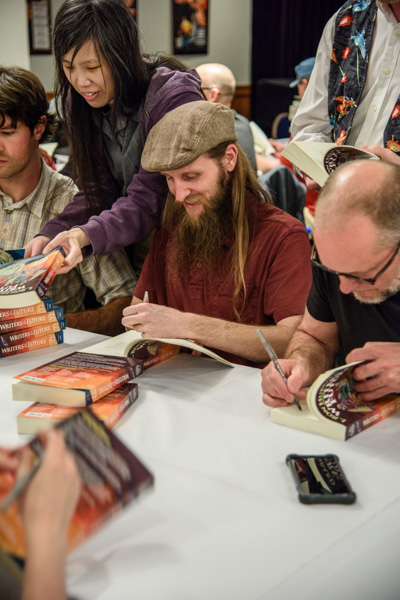 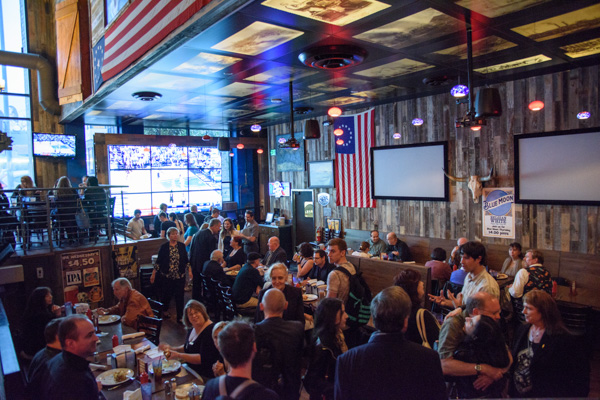 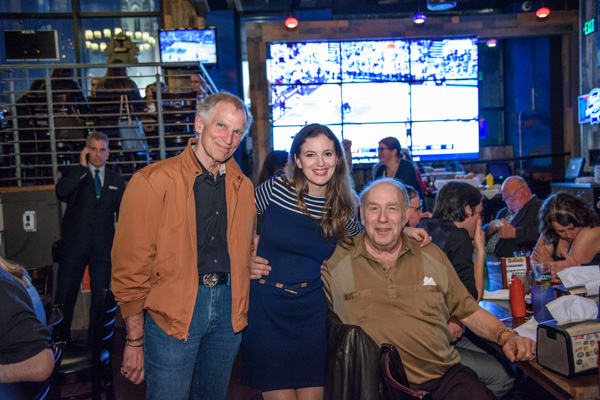 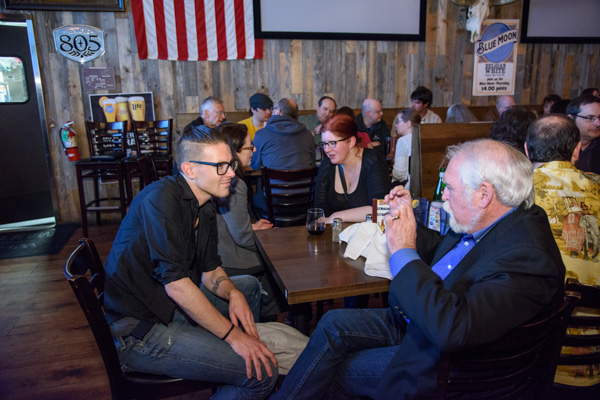 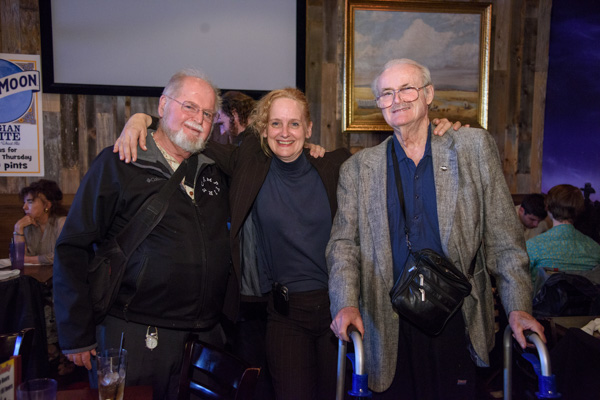 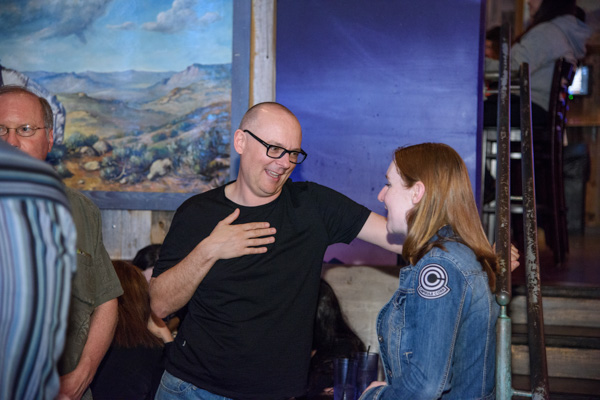