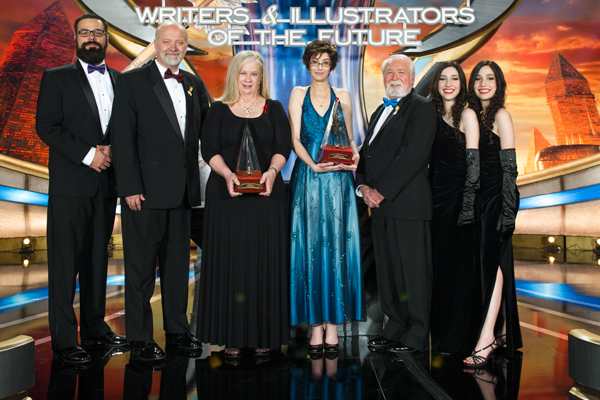 William Pomerantz, VP for Special Projects at Virgin Galactic was our keynote speaker this year and he brilliantly and very enthusiastically made every winner, judge and guest in attendance want to get on the next Virgin Galactic spaceship to the stars and beyond.

Man’s innate inclination to go to the stars is, of course, not new.

In the introduction to Battlefield Earth, L. Ron Hubbard recalls a now legendary meeting “of old scientist and science-fiction friends” he attended in 1945, in the very infancy of the Space Age. “The meeting was at the home of my dear friend, the incomparable Bob Heinlein. And do you know what was their agenda? How to get man into space fast enough so that he would be distracted from further wars on Earth.”

It was with that greater vision of taking Man to the stars that L. Ron Hubbard wrote the “Conquest of Space” future history series—published in 1949-1950. They were preceded thematically by the Hubbard story included in L. Ron Hubbard Presents Writers of the Future Volume 31 “When Shadows Fall” with its haunting opening line “There came a day when Earth lay dying, for planets also die.”

And so it was with the theme of the “Conquest of Space” in mind that we chose William Pomerantz as our keynote speaker.

He is part of making the dream of going into space as a species a reality. I have excerpted his brilliant speech below. However, I encourage everyone to go to the video of his talk here to actually watch and hear him speak. No excerpts could do justice to his enthusiasm and passion for what he does. 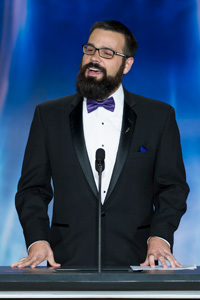 “We as a species are almost ready to truly open up the space frontier. I’m here today to speak to you as part of a team that spends every day working to accomplish just that. About 500 friends and I spend our time building the world’s first commercial spaceline.”

“It was science fiction that taught me that 547 astronauts is nowhere near enough, or that supporting a mission to hunt for rogue asteroids or distant super-Earths was an awfully good use of my taxpayer dollars.

“It was science fiction and fantasy that taught me that I could marry a beautiful woman from a distant foreign land who spends her days driving a nuclear-powered robot with a laser eye that’s on the surface of another planet—and somehow, that exact thing actually happened to me.

“Science fiction has pushed me further on my best days, and it has helped carry me through my worst.”

“As you progress in your careers, you are going to meet those fans—whether they are sending you fan mail, or engaging you online, or asking for your autograph at a convention.

“Maybe, like the main character in the short story ‘Rough Draft’ in this year’s anthology, that attention will sometimes feel awkward for you, and you won’t know exactly what to say to those fans.

“When you discover that your book or your illustration has lit a fire in a reader’s heart, encourage them to use that fire to carry the torch of humanity out into the cosmos.

“You’ve already converted them from uninterested to enthusiast, and perhaps now you can convert them from enthusiast to contributor. Who knows where some of them will go from there.

“If you do that, if you push them forward, I bet that in a few years, you’ll find that they are returning the favor and pushing you forward in return.

“And I’m not a writer or illustrator of the future—that’s you, not me—but I can tell you that that is certainly a future I’d like to see.”

And so would we. Looks easy enough.

Scott R. Parkin – There Is No Looking Back