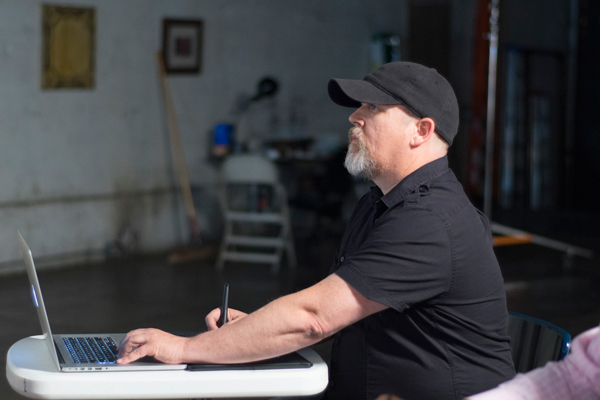 Today spotlights prolific book illustrator and comic book artist Cliff Nielsen, who has been an Illustrators of the Future judge since 2007. He had this to say about the role when he took it on:

“Through this competition, L. Ron Hubbard’s great legacy of supporting young creative talents is without equal in the world today.”

Cliff has achieved renown for work on properties involving The Chronicles of Narnia, X-Files, and Star Wars, plus projects with Marvel, and many more. With a book and magazine cover career spanning from 1994 to the present, Cliff now has nearly 500 pieces to his name, not to mention work crossing over into advertising, design, and other media.

Passionate about art ever since he was a child, Cliff pursued his love through to college, where he attended and earned a Bachelor’s degree, graduating as a valedictorian from the Art Center College of Design (where he also currently teaches). He then set out to NYC where he literally sprained both ankles taking his portfolio around to various publishing houses, refusing to give up until art directors started to give him opportunities to demonstrate his talent.

And demonstrate he did. His career flourished and his work has since been noted for its unique style and excellence by the Society of Illustrators, Print, and Spectrum, among many others. Soon, he stood in the spotlight of design and art magazines while fans raved about his unique style.

Never limiting where his art appears, Cliff claims a particular fondness for digital creation, and has even taken on the role of international speaking to address digital art. Aside from his place with Writers of the Future, he also acts as a judge for the Society of Illustrators and various other pro-level art and illustration award programs.

You may well recognize his work without realizing it. For instance, Cliff has illustrated cards for the Magic: The Gathering collectible card game, cover art for The Mortal Instruments books, The Infernal Devices, and The Cirque Du Freak series, just to name a few.

Many thanks to Cliff for all he’s devoted to illustrators of all ages around the world.

*To find out how to win, make sure you read and see what is winning. That is your ticket and the book is just a click away.