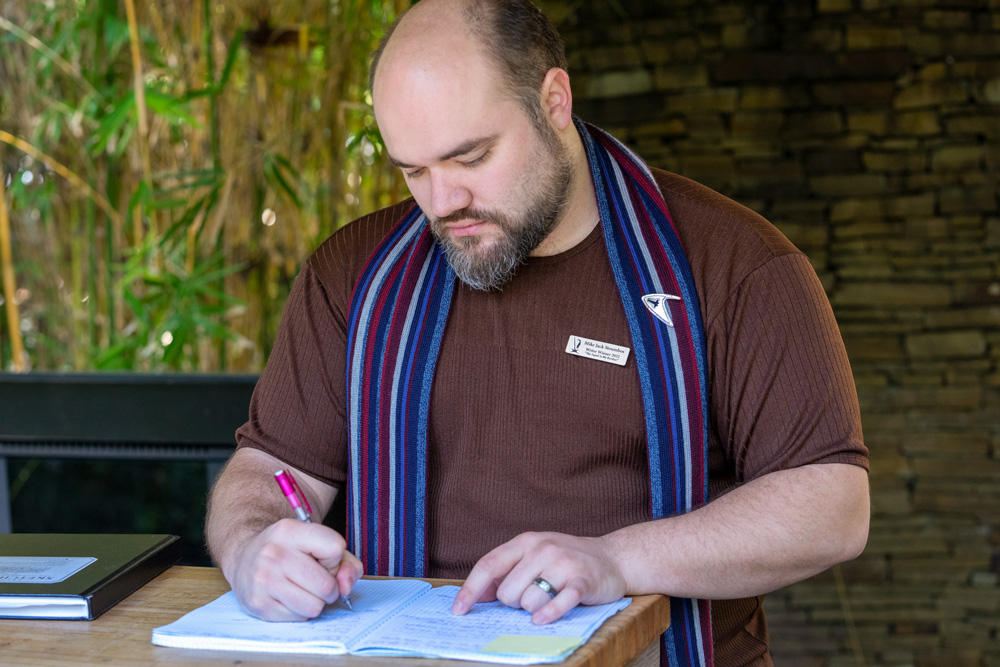 When I think about some of my favorite authors, I envision them having some effortlessly eloquent and witty response to literally every situation. Maybe, if I work hard, make some good career moves, and have a little bit of luck, future generations will hold me up to this unrealistic standard.

The truth is, in my daily life, I babble. When confronted with something new and surprising, my tongue bypasses my brain and forms these bizarre, shoot-from-the-hip remarks that I imagine few people understand but me. (My wife says it’s charming, and I say she’s endlessly forgiving.)

Sure, when I’m teaching or deliberately speaking in front of a group, I can sometimes sound like a polished TED talk, but when I receive a phone call at a random hour from an unsaved LA number to tell me I won a major award, let’s just say I’m unprepared.

My response to Joni Labaqui telling me I was the first-place winner of the Writers of the Future Contest: “I am one giant goosebump.”

Saved for posterity. Maybe someday, someone will call it poetry.

Why did I start here? (Apart from the fact that it fits my number scheme), because I assume, this is a moment many emerging authors dream and fantasize about. First professional sale, first full manuscript request from an agent, first award or recognition, first publication announcement— I mean, if you’re reading this and you are even dimly considering entering this contest or any other criteria for becoming a professional author, these are the moments in your career crosshairs. Or, if they’re not, maybe they should be.

For my part, I did not expect this phone call. Oh, I had the running fantasies about publications, but ironically never Writers of the Future. I figured this contest was a long shot, and I had a better chance of “pro-ing out” before I ever came close to winning. Maybe if I’d been more optimistic, I would have planned something better to say when I heard I’d won.

Funny thing is, the one-giant-goosebump feeling was due to repeat several times over the next year. A few months after the quarterly win was announced, I sold a space opera trilogy and had three novels published in the subsequent months. I also sold several more short stories, some at 6 or 8 cents a word, so that by the time I arrived at the Writers of the Future workshop and awards ceremony, I no longer would have been eligible to submit.

So, despite that one unforgettable moment, I never approached the story as the “one winning story.”

Two Ways of Looking at the Contest

Every time someone says, “there are two kinds of people in this world,” I get ready to look for the exceptions and the many points along the continuum. There is a lot of wiggle room and gray area in how to approach writing, just like any other artistic pursuit or career path.

BUT, for me, the decision to submit to Writers of the Future came down to flipping one switch in my brain.

See, I had heard about the contest in terms of its prestige, as well as the number of people who submitted each quarter, and the very low odds of success, which led to what I figured was a logical conclusion. “If there’s so little chance of standing out among thousands, what’s the point in sending a story?”

I had to switch instead to, “What have I got to lose?” Essentially, I went from self-rejection to “might as well.”

Does this sound too casual? Maybe. For me, casual was a requirement. I know there are a lot of people who try to tailor the perfect story for this contest—and if they learn and grow and write, that’s great for them. That didn’t work for me. In fact, I didn’t send a story to Writers of the Future until I had several other stories out for submission, until I had written enough short stories that no single story was particularly precious.

Kevin J. Anderson gives this lecture called “The Popcorn Theory of Success,” in which he talks through the pivotal moments that shaped his author career, but acknowledges that he didn’t know which ones would lead to success at the time. I’m oversimplifying, but the crux is this: one of the bestselling speculative fiction authors ever says that a key to his success was having a whole bunch of kernels in the pan, even though he didn’t know which ones would pop or when.

I heard that at an in-person lecture in 2016, and it still took years for me to really believe in and apply that lesson to myself. Still, over the next five years, I learned to submit stories by submitting many stories on an increasing basis. Similarly, anyone who wants to throw darts learns by throwing many darts and missing often as they get closer to the bullseye. The more I wrote and sent, the better I got, and the less I worried about each one.

In 2020, I was reintroduced to Writers of the Future, not in a daunting, fate-of-your-author-career kind of way, but with a question like, “Hey, are you submitting to WotF this quarter?”

By then, I was prepared. I had multiple kernels in the pan, multiple darts to throw, enough stories and ideas of where to send them that any one rejection would not knock me down. In fact, if I really liked the story, as soon as it was rejected, I would send it somewhere else.

I wrote a science fiction story about an alien encounter that made me laugh—not for a specific call, not even with Writers of the Future in mind. But at the time I first submitted, it was my favorite story, so I sent it. That one was a Semi-Finalist, which felt like a huge vote of confidence.

For the second submission, I listened to what people said were common traits of the winning stories, and I picked the story from my list that I thought would fulfill the most criteria. Among other things, it also most reminded me of a Twilight Zone episode. Number two received an Honorable Mention, which is still good but felt like a step down from the previous submission.

For the third, the story I most wanted to send was in consideration somewhere else. Still, not wanting to miss an opportunity to click “Submit,” I perused my spreadsheet of science fiction stories and pulled the story that made me happiest.

It was a story I had written in the early days of the Covid shutdown, about a student struggling with a sudden switch to a new school environment, surrounded by a lot of new norms and unknowns. Oh yeah, and she happens to have an alien symbiote with tentacles grafted to her spine. I called it “The Squid Is My Brother,” and early readers mostly told me it was weird. In fact, a couple of people who knew more about WotF than I did informed me that I couldn’t win with a first-person child narrator who used letters and diary entries to convey her experiences.

But my goal in writing the story hadn’t been to win this specific contest or to fit a formula. I had written the story I most needed to read at the time. I wrote the best story I could about an idea that fascinated me.

I sent “The Squid Is My Brother,” and it won first place for that quarter.

Now, I know not everyone will agree with the method above, and some might even think I’m being flippant or disrespectful toward the contest. To be clear, I have a great deal of respect for the Writers of the Future Contest and the judges. I am also immensely proud to be a part of the Volume 38 cohort and consider the experience and the workshop incredibly valuable.

Still, for me to have sent in anything, I had to get past the notion of crafting the perfect, sacred story. I couldn’t spend all of my time or energy hoping these professionals of the spec fic industry might find my particular needle in a haystack with many other awesome needles. That’s why I was working on several short stories and a novel during any given quarter and why I sent them to dozens of places, including this contest.

I had heard several people in my writing community describe the amount of focus they put into crafting their WotF story each quarter, which would not have worked for me. By contrast, if more people had simply told me “write, send, repeat,” I probably would have entered much earlier.

Let me be that person for anyone reading who is wondering about whether or not they’re ready to submit to Writers of the Future: You might as well, and you have nothing to lose.

If you’re still not sure, here are four reasons to submit that I wish had been highlighted for me:

If you’re intimidated by having professionals read and possibly critique your work, banish that fear for Writers of the Future. The judges will only find out your name after they choose you as a winner—or at least a Semi-Finalist—which means they already think your story is awesome. Anything else, be it an Honorable Mention or a rejection, is practice and progress.

As a teacher, I’m compelled to say, “Practice makes better,” as opposed to the “perfect” adage. In the last year, with the Writers of the Future win and a novel trilogy published, I have been teaching workshops for emerging authors in addition to the high schoolers I work with, where I will often encourage people to submit to the Writers of the Future Contest. To that end, I ask if they’ve submitted before; if the answer is “no,” I try to avoid any advice other than “hit Submit.”

Don’t overthink it, don’t self-reject, and don’t fixate on perfection if perfection prevents you from putting prose on paper. Who knows? The story that might not seem like a fit could be the winner. 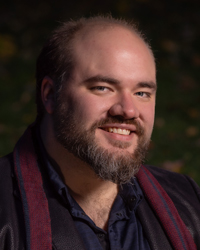 Mike Jack Stoumbos is a spec-fic author, disguised as a believably normal teacher, living with his wife and their parrot.

Mike grew up with three brothers and over forty first cousins, who he enlisted as test audiences (and participants) for his imagined adventures, often reenacted with cardboard props or Star Wars action figures. His love of storytelling brought him to the stage as a musical theater actor, the role-playing table as a game master, and a career trajectory to teach English and theater. In the summer of 2019, however, Mike shifted his writing passion into a priority, and once again became a student: attending workshops, practicing daily, and braving the story submission gauntlet.

Mike’s work has since appeared in several collections, including his first pro sale in Galactic Stew and a publication alongside a personal hero in Hold Your Fire: Stories Celebrating the Creative Spark. Shortly after he was named a Writers of the Future winner, Mike’s space-opera series, This Fine Crew, was picked up by Chris Kennedy Publishing, for many continuing adventures.

The idea for “The Squid Is My Brother” emerged as a curiosity: how to take something from cosmic horror and make it as endearing as a family member. Even more importantly, Mike wrote this story shortly after the schools had closed due to COVID in 2020 as a young student’s first-person account of transferring into a bizarre new environment, fearing the unknown, and learning about humanity.

For more information please visit his website at: www.mikejackstoumbos.com