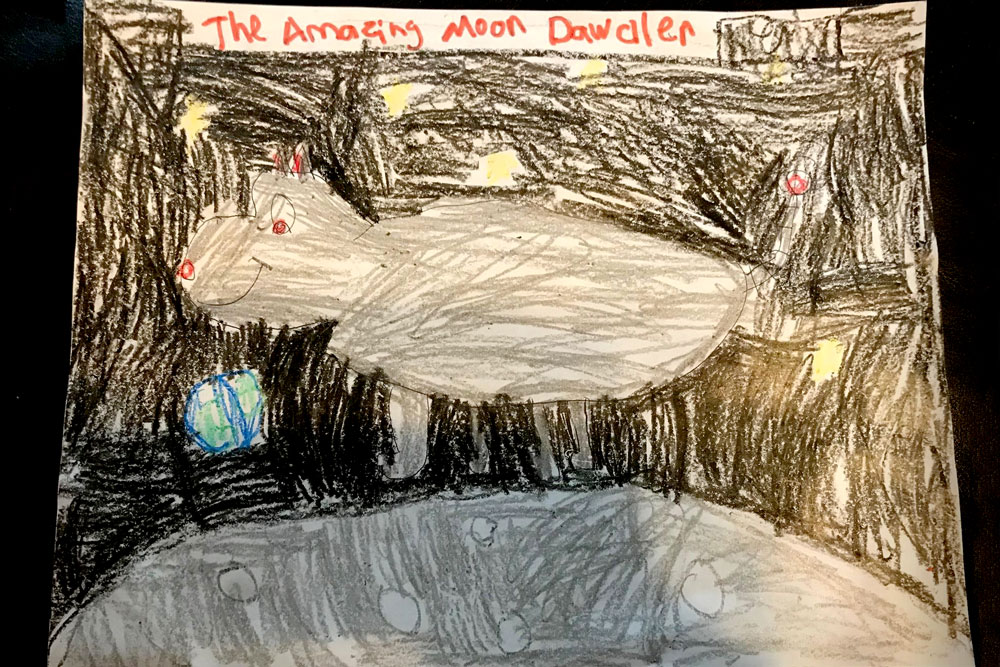 This is a book review by author and mother Brittany Rainsdon who reads to her kids. “Super-Duper Moongirl and the Amazing Moon Dawdler” is an award winning sci-fi short story in L. Ron Hubbard Presents Writers of the Future 35. This science fantasy story is about a courageous disabled young girl who deals with bullying on a Moon-based sci-fi space station.

Summer has been a blast! We made so many memories this year—camping, fishing, parades and more—and it reminds me of the things I thought were cool when I was little. Pokemon, Harry Potter, the Texas State Fair and fishing at Meadow Lake. This year my daughters are into kitty cats, coloring, dancing and dolls. My son is into science, dogs, robots and … the amazing Moon Dawdler? What?

I read to my kids. We always have a bedtime story and sometimes we cuddle up to read just because. I love reading (and writing) and I hope that’s something I can instill in my kids. Books can open your eyes, drop you in another world, or make you feel and learn things you’d otherwise never experience.

I bought volume 35 of Writers of the Future this year for three reasons: I had a friend in it, I was a finalist in their contest that year, and the stories are usually, well, awesome. They’re not geared toward little kids, and for the most part, I wouldn’t recommend picking out any story and reading it out loud for bedtime.

But “Super-Duper Moongirl and the Amazing Moon Dawdler”? Yeah. I would.

That story lit a fire in my son. All summer long he’s gabbed “we should visit the moon,” and “could you make a moon dawdler for me?” and “do you think Mr. Moonie would like my picture?” (Mr. Moonie is what he calls the author, Wulf Moon). I even walked in on him coaching his art-loving little sister on how to make a super-duper moongirl—FYI the secret is more red. With the anniversary of the moon landing, our library had a space-themed reading program where we spent many days playing in the fabric space-ship they’d set up and my son dreaming of going to Mars for reasons I won’t spoil. He climbed trees with his cousins at a family reunion and I heard snatches of conversation float down from the leaves. The subject? Moon Dawdler. It made me smile. Because guess what, I love Moon Dawdler too.

I remember reading it to my son for the first time. I chose it because it combined his favorite things in the world—science, dogs, and robots. I remember my little boy curled up against a pillow, completely engaged as I read. He smiled and laughed. Then I watched his eyes go wide and misty as we neared the end. He was seven-years-old (he recently turned eight) and yes, he was that attentive. When I shut the book, he bawled, but when he was done he said it was a “good sad.” I asked him what he thought happened next, what he liked about the story, and if there were parts he didn’t like. I will forever cherish those memories of discussing this sweet story with my little boy. 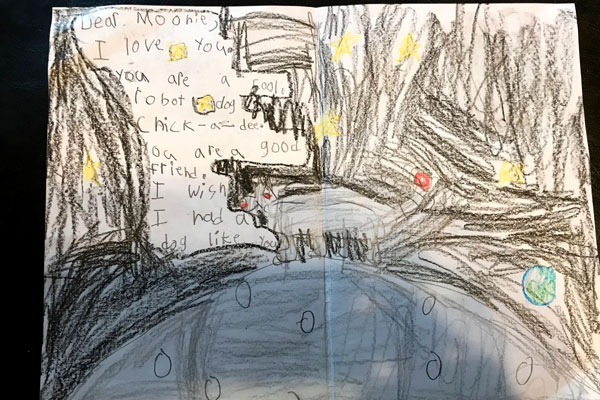 School just started and he took a little bit of Moon Dawdler with him—in the form of a shiny button on his backpack. I thought it was fitting, because in our talks we decided Moon Dawdler is brave. 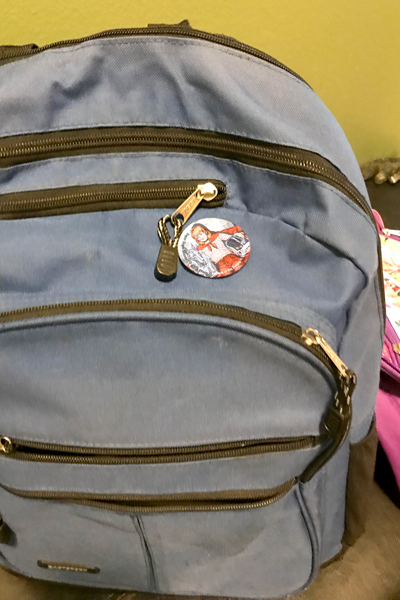 I don’t know how long Moon Dawdler will be part of my son’s imaginary play, but I do know that story will forever be a part of him. The fair rolled around last week and he entered their art contest. Guess what he drew? I suppose he had most of the summer to practice. 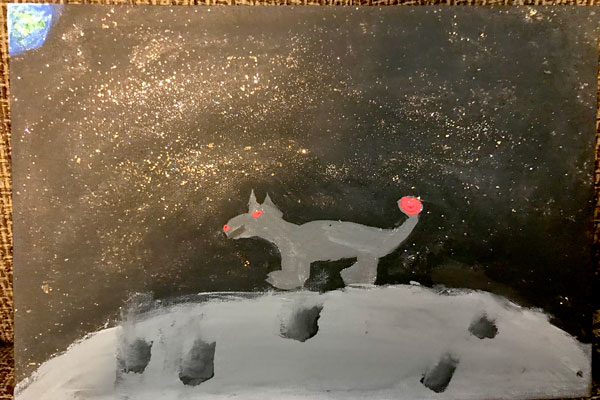 So we had a great summer enjoying the things we love. And when my little boy grows up and reflects on the things he loved at seven or eight years old, I hope we still have that button.

Also, I should clarify that the Moongirl picture is the one my boy coached my daughter through. Right down to the red shoes. lol! 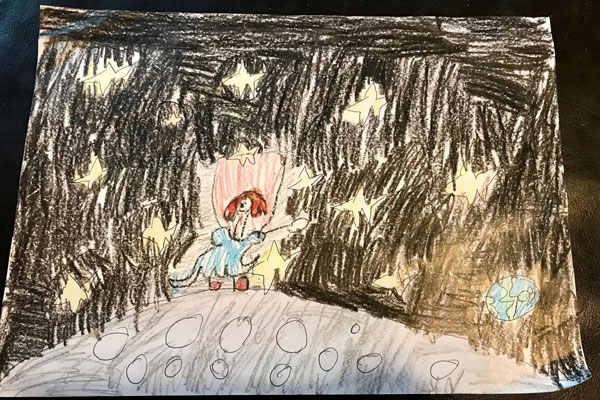 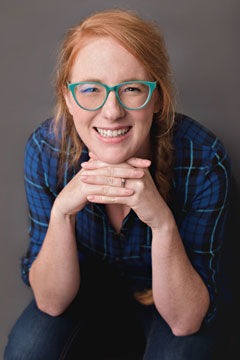 Brittany Rainsdon grew up as the only girl in a family with four brothers. She’s reversing that trend with her own children—three girls and one boy. Brittany is a registered nurse and has worked in both medical/surgical and rehabilitation nursing. When she went to her first writing conference in 2017, she wore a new pair of green glasses and several people recognized her during lessons as “that girl in the glasses.” She kept the nickname and uses it as her tag on the Writers of the Future Forum. Brittany wants to eventually publish novels, but is currently focusing on writing short stories. Learn more about Brittany by clicking here.

Illustrators of the Future Welcomes Award-Winning Artist Craig Elliott as its...