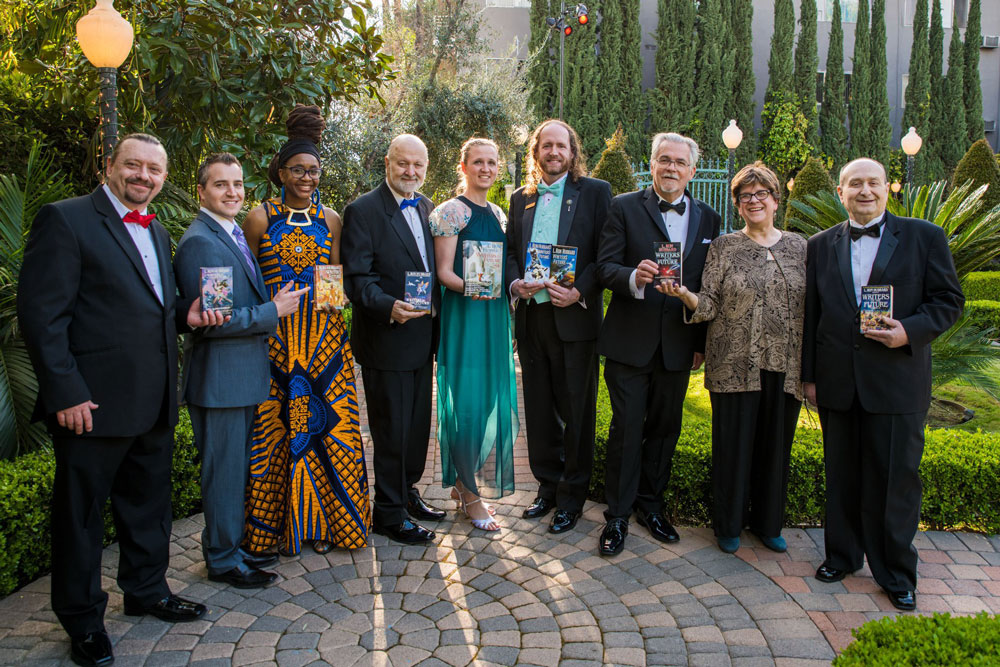 John Goodwin, President of Galaxy Press, said: “This year marks a historic milestone in our contests with simultaneous benchmark anniversaries, the 35th Anniversary of our Writer’s Contest and, at the same time, the 30th Anniversary of our Illustrators Contest. This year was also groundbreaking for another reason, in that, Aliya Chen made history becoming our first Chinese Grand Prize Winner ever selected in either of our competitions.” This year’s event was an Invitation Only Black-Tie GALA which was streamed live via the website, www.writersofthefuture.com, from 7:30 – 9:30 p.m. PST on Friday evening, April 5, 2019.

Andrew Dykstal, The Winner of the Grand Prize Writer’s Award, said: “This is absolutely fantastic! I feel that my career as a writer has now been catapulted. It’s a tremendous honor to be here. The quality of the stories of my fellow writers in this contest is amazing. I have made new friends for life. Having the opportunity, as I have for this past week in workshops networking and learning from authors I grew up reading, and whom continue to influence and inspire me, has been an experience I will never forget.”

Aliya Chen, The Winner of the Grand Prize Illustrator’s Award, said: “I didn’t expect this at all. I’m overwhelmed and very grateful! Winning this Grand Prize Award is validation for me that illustration, which is a passion for me, doesn’t have to be limited to a hobby, but it’s definitely possible as a career. I also feel God has opened these doors for me. My twin sister, Felicia, who is also an illustrator like myself, is the person who actually learned of the Illustrators of the Future Contest and encouraged me to enter. We are both supportive of one another, and for that reason we both didn’t enter the competition at the same time. This is a moment in my life I will never forget!”

Joni Labaqui, Director of Contests for Author Services, Inc. said, “This year, our fourth quarter illustrator 2018 winner, Alice Wang, became the youngest winner to ever enter our contests and win, at the age of 15. Submissions for our Writers and Illustrator Contests over the last 35 and 30 years respectively, have come from over 175 countries. This year we had four quarterly winners from England, more than ever before in one year. Selecting the two Grand Prize Winners from thousands of contest entries submitted annually is not an easy process.”

The awards show was held in the visually opulent Grand Ballroom of the Taglyan Cultural Complex nestled in the heart of Hollywood. Catered by Divine Food, the GALA began with tray passed Hor D’oeuvres and Cocktails, followed by a delectable Mediterranean four-course meal and the Awards Show, followed a Book Signing and Reception in the plush Foyer of the Taglyan.

In his Keynote Address, Ed Hulse talked about the Golden Age of Science Fiction and post World War II, with a veritable explosion in pulp magazines. Hulse said, “The Golden Age of Science Fiction isn’t a relic of the past. It has seeped into our popular culture in myriad ways. The Galactic Empires of Isaac Asimov’s ‘Foundation’ series were foremost in the mind of George Lucas when he conceived ‘Star Wars,’ and Doc Smith’s ‘Lensmen’ were among the influences of his Jedi knights. In the first film’s famous bar scene, he even lifted a sequence from L. Ron Hubbard’s story ‘The Kingslayer’ virtually word for word. Van Vogt’s mutant ‘Slans’ were forerunners of Marvel’s ‘X-Men.’ Countless popular motion pictures and television shows have adapted classic Golden Age pulp yarns, officially and unofficially.”

Hulse continued, “These storytellers all contributed mightily to the evolution of Science Fiction. And now you’re part of that evolution. You represent a new generation of writers, alternately building upon and superseding literary traditions now more than a century old. Yours are the ideas and concepts that will shape Science Fiction for years to come. I look forward to seeing how you’ll respond to the challenge of making science fiction relevant to the readers of tomorrow.”

Awards for each of the Quarterly Finalists of the Writers and Illustrators Contests were presented by actors Kate Linder, Lee Purcell, Sean Cameron Michael, Ernest Pierce and Phil Proctor, along with renowned judges specializing in the genres of Science Fiction and Fantasy.

Dr. Beatrice Kondo, daughter of the late Writers of the Future Judge, Dr. Yoji Kondo, and a member of the Heinlein Society Board of Directors, presented Gunhild Jacobs, Executive Director of Author Services, Inc. with a Letter of Recognition. The Heinlein Society is devoted to the study and promotion of the late American Science Fiction author Robert A. Heinlein. During her presentation, Dr. Kondo said, “L. Ron Hubbard established the Writers of the Future contests as a means for new and budding writers to have a chance for their creative efforts to be seen and acknowledged. On behalf of the Heinlein Society and issued by its President and Chairman, George E. Rule, I would like to present a letter of recognition to L. Ron Hubbard and his enduring Contest on the occasion of the 35th Anniversary.”

Following the 1982 release of his internationally acclaimed bestselling Science Fiction novel, “Battlefield Earth,” written in celebration of 50 years as a professional writer, L. Ron Hubbard created the Writers of the Future Contest (www.writersofthefuture.com) in 1983 to provide a means for aspiring writers of speculative fiction to get that much-needed break. Due to the success of the Writing Contest, the companion Illustrators of the Future Contest was created in 1988.

The annual Contests draw entrants from around the globe and are free to enter. Winners retain full rights to their work and each are given cash awards. Each year three winners are selected quarterly for both the Writers and the Illustrators Contests. Then a Grand Prize winner is selected for both the Writers and the Illustrators. Grand Prize Winners receive an additional $5,000. The Contest flies out all winners to Los Angeles for an expense-paid, weeklong workshop given by Contest judges and culminates in a Black-Tie Gala Awards event. The contests promote the arts welcoming diversity, ethnicity, creativity and equality, with no age limits.

In the 35 years of the Writers of the Future Contest, there have been 416 winners and 80 published finalists. The 416 past winners of the Writing Contest have published 1,150 novels and nearly 4,500 short stories. They have produced 32 New York Times bestsellers and their works have sold over 60 million copies.

In the 30 years of the Illustrators of the Future Contest, there have been 346 winners. The 346 past winners of the Illustrating Contest have produced over 6,000 illustrations, 360 comic books, graced 624 books and albums with their art and visually contributed to 68 television shows and 40 major movies.

The Writers of the Future Award is the genre’s most prestigious award of its kind and has now become the largest, most successful and demonstrably most influential vehicle for budding creative talent in the world of contemporary fiction. Since its inception, the Writers and Illustrators of the Future contests have produced 35 anthology volumes and awarded upwards of $1 million in cash prizes and royalties. For more information please visit www.writersofthefuture.com and www.galaxypress.com