On the day of the awards, winners, presenters, and judges undergo professional makeup and hair styling. The new authors and illustrators are often interviewed by the media.

After participants get dressed, they are transported to the evening’s lavish banquet, often in stretch limousines. These banquets have been held at Chasen’s Restaurant in Beverly Hills, at Windows on the World in New York’s World Trade Center, atop the Space Needle in Seattle, at the Renaissance Restaurant in Hollywood’s fabulous Chateau Elysée and in the ballroom of the Beverly Hills Hotel. 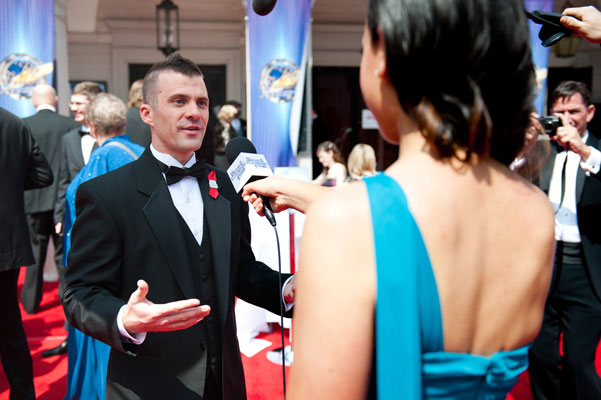 Excitement builds as the audience gathers for the Awards presentation. Participants walk the red carpet and have their pictures taken. In addition to the venues mentioned previously, the ceremony has taken place in the Trusteeship Council Chamber of the United Nations, the US National Archives, the Houston Space Center, the Kennedy Space Center, the Flamingo Hilton in Las Vegas, the Roosevelt Hotel in Hollywood, the Science Fiction Museum in Seattle, the San Diego Aerospace Museum, the Caltech Athenaeum and the historic Ebell Theatre in Los Angeles.

Guest speakers are drawn from visionaries, scientists and science fiction luminaries. Before the Awards themselves are presented, the publisher, Galaxy Press, releases that year’s L. Ron Hubbard Presents Writers of the Future volume. Judges and celebrity presenters introduce the winners and present awards to the writers and illustrators who placed First, Second and Third in each quarter. 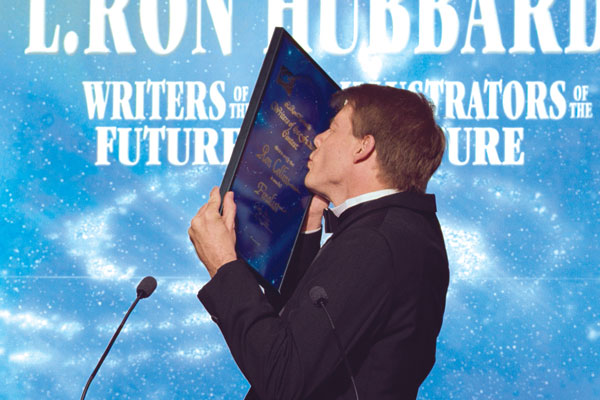 Over the years, winners have accepted their trophies with powerful emotional reactions—rejoicing, cheering, crying, kissing the award (and sometimes the presenter). Finally, at the climax of the evening, the recipients of the L. Ron Hubbard Golden Pen Award and Golden Brush Award are announced. The winners each receive an additional trophy and a $5000 bonus check.

A glitzy reception follows the ceremonies, at which the winners take part in a group book signing, during which many of them autograph their fiction for the very first time.

But it will not be the last.