“There used to be articles in the writers’ magazines about the incredible speed with which L. Ron Hubbard wrote,” a science fiction editor and historian once remarked. “And in those days an electric typewriter was a novelty. Very few writers had one. And the very fact that L. Ron Hubbard had bought an electric typewriter so he could write faster was considered quite newsworthy.”

Science fiction Grand Master Jack Williamson recalled: “He was using an electric typewriter—the first one I ever heard about—and he was able to write two thousand words an hour, and he generally would sell them on first draft, I think. It was something that very few of the rest of us could do.”

Hubbard explained his own secret to his extraordinary productivity—namely, “To write, write and then write some more. And never to allow weariness, lack of time, noise, or any other thing to throw me off my course.”

As a consequence of his popularity and prodigious output, novice writers who hoped to learn Hubbard’s storytelling skills often consulted him for advice. He was always willing to offer suggestions and, in fact, provided lengthy responses to queries on where a writer should live, how much research one should do and which type of fiction to write. In a somewhat wide-eyed reply, one such aspiring author informed him: “Received your very generous letter in answer to my query. I feel I cannot let it pass without letting you know how much I appreciate the trouble you took to inform me about things I couldn’t have known otherwise, or without wasting a good deal of time, effort and perhaps money.”

Hubbard further shared his hard-earned experience with creative writing students at Harvard and George Washington University. (As he tells it, students went “positively apoplectic” when told that the only way to become a writer was to write.) To help young writers accomplish just that, Hubbard authored a series of how-to articles that appeared in writing magazines through the 1930s and 1940s. Offering guidance to help new writers navigate the rough waters they were likely to encounter, these articles are classics in their own right:

“When you first started to write, if you were wise, you wrote anything and everything for everybody and sent it all out. If your quantity was large and your variety wide, then you probably made three or four sales.” (“The Manuscript Factory,” 1935)

As Jack Williamson explained, “I used to read Hubbard’s articles in Writer’s Digest and Author and Journalist and so forth about how to write and be successful. Writers’ magazines wanted to fill up their pages with inspirational articles and ideas and he was their prolific source of such material—and a natural for them.” 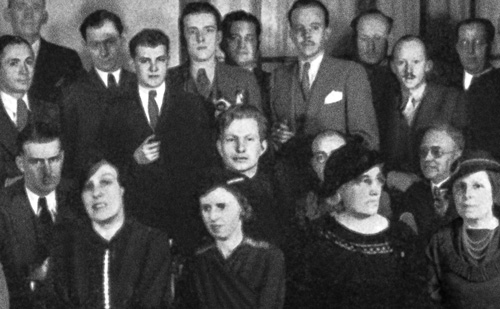 L. Ron Hubbard, center second row, with members of the New York chapter of the American Fiction Guild, of which he served as president in 1936

Shortly after publishing “The Manuscript Factory,” Hubbard became elected the youngest-ever president of the New York chapter of the American Fiction Guild and immediately set out to remake that organization into a truly practical and professional guild. By way of example, in order to promote more accurate use of factual detail in detective and mystery fiction, he invited a New York City coroner to join Guild members over lunch, whereupon all were regaled with the man’s professional expertise on strange forms of murder. (“They would go away from the luncheon or something like that the weirdest shades of green,” Hubbard recounted afterward.) He extended similar invitations for other experts, including the city’s police commissioner. Likewise, as Guild president—and this expressly on behalf of the neophyte writer—he allowed newcomers to join under a new category of “novice.”

In 1940, as a feature on a radio program Hubbard hosted while in Ketchikan, Alaska (where he paused on one of his several expeditions under the famed Explorers Club flag) he offered not only practical advice for beginning writers, but also initiated the “Golden Pen Award.” It was designed to encourage listeners of station KGBU to pen short stories, and the best of them were submitted to a professional New York publisher. In that respect, Hubbard’s Golden Pen Award was a direct precursor to his contest of today. More than four decades later, in 1983, L. Ron Hubbard created and endowed the Writers of the Future Contest as a means to discover and nurture new talent in science fiction. The Contest is very much an extension of a well-established and demonstrated philosophy of “paying it forward” to help new generations of writers.

The following is excerpted from Hubbard’s introduction to the first volume of Writers of the Future winners:

“A culture is as rich and as capable of surviving as it has imaginative artists. The artist is looked upon to start things. The artist injects the spirit of life into a culture. And through his creative endeavors, the writer works continually to give tomorrow a new form.

“In these modern times, there are many communication lines for works of art. Because a few works of art can be shown so easily to so many, there may even be fewer artists. The competition is very keen and even dagger sharp.

“It is with this in mind that I initiated a means for new and budding writers to have a chance for their creative efforts to be seen and acknowledged. With the advent of the Writers of the Future competition came an avalanche of new material from all over the country. . . .

“Judging the winners for this book could not have been an easy task, and I am sincerely grateful to those professionals and top-flight veterans of the profession for their hard work and final selections which made this book possible.

“And my heartiest congratulations to those they selected for this first volume.

“Good luck to all other writers of the future.