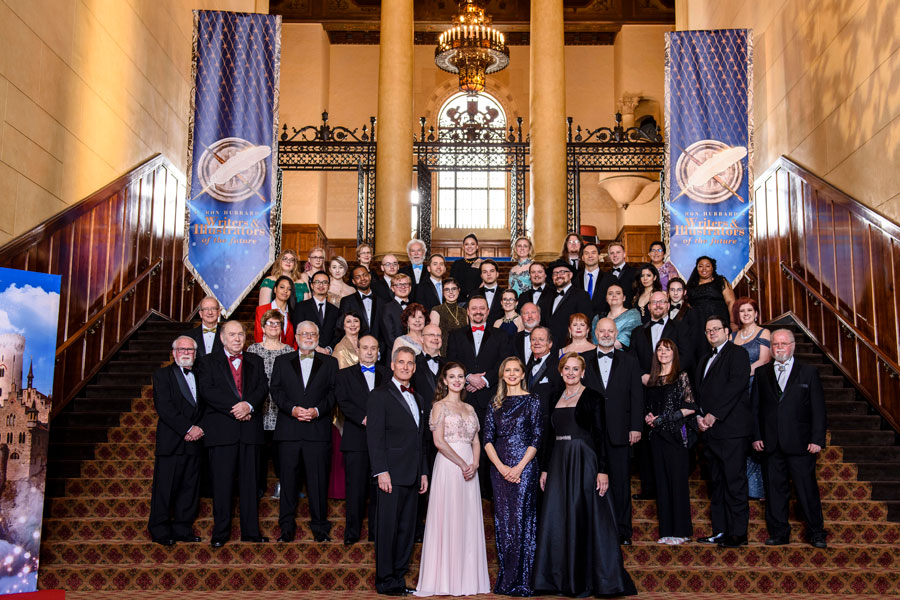 Darci Stone, a writer from Orem, UT and Kyna Tek, an illustrator from Gilbert, AZ were this year’s Grand Prize Winners at the 34th Annual L. Ron Hubbard Achievement Awards for Writers and Illustrators of the Future Contests in Science Fiction and Fantasy held at The MacArthur in Los Angeles, California. The gala event, presented by Author Services, Inc. and Galaxy Press was held on Sunday evening, April 8, 2018. A capacity crowd of 450 people attended the black-tie event, which had a theme of “Magic and Wizardry.”

We’ve experienced that history sometimes has a way of repeating itself. Thirteen years ago in 2005, Darci Stone’s husband, Eric James Stone stood on stage as a Quarterly Award Winner of the Writer’s Contest. And now his wife, Darci, who started dabbling in writing speculative fiction while dating and attending Eric’s weekly writing group sessions, has walked off with the Grand Prize as Writer of the Year.

For illustrator Kyna Tek, who was born in a refugee camp in Thailand and whose family later immigrated to America, winning the Illustrators of the Future Grand Prize is a dream come true.

In keeping with the evening’s “Magic and Wizardry” theme, the gala celebration opened with magician/mentalist Spidey and magician/illusionist Joel Meyers performing a visually stunning dueling wizards routine with floating objects appearing in mid-air. Later in the evening, they performed a very interactive routine with the participation of celebrities and audience members.

Over the years, submissions for the Writer and Illustrator Contests have come in from over 175 countries. And this year we received entries from three new countries: Andorra, Seychelles and Benin. Selecting the two Grand Prize Winners from the thousands of contest entries submitted every year was not an easy process.

In her acceptance speech, Darci Stone commented, “My husband won a Nebula Award. I am fairly certain that this is a much bigger trophy. I would like to thank my artist, Quintin Gleim, for illustrating my words into an image. I hope one day that all of us will see our names, stories and artwork in best-selling books.”

Kyna Tek, who was visibly in shock when he heard his name called out said, “When I saw everyone else’s illustrations in this Contest I never imagined I had a chance. Thank you for this moment. I’m never going to forget it. I will cherish it forever.”

The awards show was held in the Elks Hall of The MacArthur, a historic Los Angeles landmark conceived in a visually opulent Gothic Revival architectural style with cathedral-like ceilings. The book signing and reception, which followed the awards event, was held in the equally well-appointed Grand Ballroom.

The keynote speaker was Ruben Padilla, a magician and founder of Narrative Strategies. In his address, Ruben delivered a heartfelt presentation to the winners and guests and stated, “The entire purpose of tonight is to celebrate, in all its fantastical forms, the creation of words and illustrations. Something magical happens to you when you write something down.”

Artist and Illustrators of the Future Judge Larry Elmore was presented with the L. Ron Hubbard Lifetime Achievement Award for Outstanding Contributions to the Arts. Larry has been an inspiration for countless artists over the years including this year’s winners Kyna Tek and Anthony Moravian who thanked him from the stage. It was Larry who told Kyna to enter the Contest after seeing Kyna’s artwork at a convention—and the rest is history.

Actress Judy Norton sang “My Father’s Song” written by composer/lyricist Pauline Frechette as part of an In Memoriam tribute to two of our esteemed Contest Judges who passed away over the last year, Jerry Pournelle and Yoji Kondo.

For a complete listing of the contents of the book and the names of all the winners, go here.

Awards for each of the Quarterly Finalists of the Writers and Illustrators Contests were presented by actors Nancy Cartwright, Jade Pettyjohn, Sean Cameron Michael, Catherine Bell and Lee Purcell, along with judges from the Contests. Photos from the event are posted below.

All in all, a very magical evening for all this year’s Writer and Illustrators of the Future winners.